Of course it’s first and foremost the children, my wife, my closest and oldest friends. All that goes without saying. But after that very short list – what else?

Those which once were pleasures are no longer. And I wish that I had jettisoned some of them (the 40 fags-a-day, what bliss that once was!) much earlier. So much that once seemed vitally important has now dropped away. Good riddance.

Nowadays the greatest love of my life is defined by that which I never tire of. I never tire of reading, and I rarely tire of writing. I adore solitude, which is essential for reading and – for me – is also vital for writing. These are individual acts, matters that can only be done alone. We are all familiar with the corporate or business document that has been drafted collectively. It has had all the lifeblood sucked out of it, as it drifts towards the lowest common denominator of the blandest inoffensive verbiage. Why do corporations persist in thinking that a string of stitched-together clichés will impress anyone, or be remembered the moment the room has been left?

Why do corporations persist in thinking that a string of stitched-together clichés will impress anyone, or be remembered when people have left the room?

This path, this finding greatest contentment either sitting at my desk in front of a screen trying to conjure a phrase or two, or curled up on a sofa with a book, can lead to introspection, a separation from society. But then my disenchantment with ‘society’ is measureless and always has been. As one of my heroes, Jonathan Swift, once wrote in a letter to his friend Alexander Pope: “I have ever hated all nations, professions, and communities, and all my love is toward individuals: for instance, I hate the tribe of lawyers, but I love Counsellor Such-a-one and Judge Such-a-one: so with physicians – I will not speak of my own trade – soldiers, English, Scotch, French, and the rest. But principally I hate and detest that animal called man, although I heartily love John, Peter, Thomas, and so forth.”

If the old guard of political life is dead (but does not yet realise it) again, good riddance. They have failed us in so many ways. Yet what might arise to take the place of the time-serving stunted intellects that now govern the world? I write this as the 70th anniversary of the Holocaust is commemorated. A mere 70 years ago such bestial butchery bestrode most of Europe. It is but the blink of an eye. Today we may be on a cusp of revolutionary change. How can we be certain that it’s not a matter of, as W.B. Yeats put it:

“And what rough beast, its hour come at last,

Slouches towards Bethlehem to be born?”

How else can one love, other than individually? 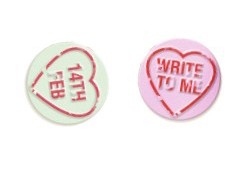