Ahead of the Good Work, Mental Health & Wellbeing #JerichoConversation on Friday 1 May, Jericho’s Research Director, Andrew Gunn, has been polling the 4000-strong Jericho community about wellbeing and productivity during lockdown. This could be a genuine inflection moment for where and how we work. Matthew Gwyther considers the findings.

Click here to read a summary presentation with the initial findings of the Jericho Good Work, Mental Health & Wellbeing survey.

As far as the future of work is concerned this survey shows few are certain about anything. Expert predictors of things to come, if they are sensible, are very guarded. Fearful guesswork is the order of the day. The hard numbers are pretty grim – today the ONS has announced that 25% of British firms have closed and 70% of households are now operating on a reduced income. The economy is severely winded and it’s hard to know when its natural dynamism will be allowed to return.

One thing’s for certain, few in the survey see things getting back to normal any time soon. Talk of V-shaped recovery has as good as evaporated and half our respondents cannot even see themselves being back in their office before Q 3 or 4. Thirty-five per cent feel they have less job security and it is to be hoped that isn’t overly optimistic. When they get back behind a desk they aren’t expecting much to be the same. They anticipate far less personal contact with colleagues, ends to hot desking, few serendipitous meetings in the lift or corridor. Half will make active efforts to socially distance for the foreseeable future even if lockdown is eased. They aren’t going to be running back to bars and restaurants.

Who knows if this will come true. Many were convinced after the financial crisis and Great Crash of 2008 that nothing would be the same again but they were proved wrong. But maybe this pandemic will permanently change how many bankers, for example, fit daily into tightly packed, costly city-centre offices.  Barclays CEO Jes Staley said on Wednesday that majority of its staff currently working from home or backup sites, will not revert fully to their pre-January working habits.

“There will be a long-term adjustment in how we think about our location strategy…the notion of putting 7,000 people in a building may be a thing of the past,” he said.

There is a positive side, however. Sixty per cent feel more confident in their ability to work remotely however crucially the whole covid accommodation means that 57% feel they are less productive than before. There’s a tacit acknowledgement that remote working from home doesn’t get as much done as before.

It’s encouraging that attitudes towards employers are generally positive: there’s a sense that many have risen to the challenge of providing good IT kit, some have even grown to love Zoom and bosses have tried hard to be supportive and empathetic. Trust levels between employer and employee have thus far not been damaged.

Few appear to be missing their commute to work very much. But the survey shows a marked split on the human effects of home working. “I am now a cleaner, nanny, wife, teacher… and yes a CEO,” said one woman. Many are frazzled by brain overload and find difficulty in separating work and home when the two have become so inextricably merged. If this is the new normal then roll on the past. Others are more open to permanent change and are reclassifying what’s important to them.

If you would like a full presentation of the findings or would like to discuss a similar poll for your own organization, please get in touch with Andrew Gunn, Research Director, Jericho Chambers. 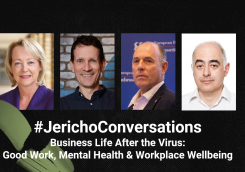