Three decades ago, I defamed a knight of the realm in The Observer. We spent some expensive time taking counsel in chambers, where it was decided that we should settle out of court and apologise.

“But it’s true!” I wailed, meaning my story, which was now to be withdrawn as a lie.

My editor fixed me with a doleful stare. “George,” he said, “there’s your truth, there’s my truth and there’s the truth.”

A national newspaper may be an unusual place to receive an object lesson in moral philosophy. But that’s where I learned what the subjectivity and relativity of truth really mean in the cruel and real world. So allow me a smile of world-weariness when “post-truth” was voted Word of the Year for 2016 by Oxford Dictionaries.

I didn’t think I was telling porkies in my Observer piece. I do think the Brexit campaign of last summer had mendacity written through it like Brighton through rock and that Donald Trump must still be dabbing his scorched nethers in lanolin from the raging fire that consumed his pants.

But, then again, there’s my truth, there’s their truth and there’s the truth. This is not a new problem. When Pontius Pilate had the world’s worst day at the office, he famously asked: “What is truth?” We can’t know if he said it wistfully, staring into the middle distance, or rhetorically or facetiously. What we are told is that the alleged offender before him, Jesus of Nazareth, made no reply. We can reasonably assume that this isn’t because he didn’t know the answer.

The trouble is that we invariably don’t know the answer. Partly because of that relativity to which I refer, but more usually these days because of fake news, the internet’s polemical echo chambers, political impressionism trumping policy and, er, Trump. A tad patronisingly, this is called populism, as if this is what the populus ordered.

The thing is that a post-truth era in politics implies that it follows an era of truth. This, to coin a phrase, is not true. What’s actually happened is that we’ve moved straight from a pre-truth era to the post-truth. It’s precisely because we struggle so much with the Truth with a capital T that we go with what we can manage: both pre-truth and post-truth are manageable because they demand producers and a market, the pre-truth era characterised by spin and the post-truth by artifice.

The pre-truth era was apparent not only in politics, but also in the business world, where corporates and their PRs constructed the required narrative ahead of the event. Boardrooms and agencies echoed to the phrase “what is the story we want to tell?”

There’s nothing intrinsically wrong with that. We all plan our narratives and there’s no reason why corporates shouldn’t do the same, if they’re run by humans rather than bots. It’s also right that some of these narratives can be “made up”. Importantly, this isn’t lying; it’s more like a story that reveals a profounder truth about who we are.

No one believes the Oxo family were real, but they were a rich sauce reduced from reality and fiction, a recipe worth more than the sum of its ingredients, a nourishing paradigm, a story. And it’s the artistic mythos combined with the rational logos that makes our stories make sense. From Homer to Socrates, if you like.

Where pre-truth went wrong in politics (and actually in corporatism as well) is when the logos became indistinguishable from the mythos. Higher truth is revealed when they are in concert; if they become one, then there is no truth at all. New Labour did this in politics – rapid rebuttal became pre-buttal became pre-truth. And that gave us dodgy dossiers, the Iraq war and WMDs gone AWOL.

Pre-truth spawned its bastard child, post-truth. One neat reason for this is that if you treat your voters like idiots they’ll behave like idiots. Like all good mythos, there’s some truth in that, but it’s not quite right. As the former Labour campaigner Spencer Livermore writes in PR Week, politics is just a visible expression of consumerism, so voters behave as consumers. I’d go further: disillusioned consumers make erratic choices. So pre-truth politics gave us the climate in which post-truth could prosper.

Livermore notes that that this has alarming implications for corporates. The feral voter will turn on the corporates. I don’t much care about the reputation management opportunities that arise from this process, but I mind very much about how stories are told, because they reveal who we are and what our society is like (mythos and logos again).

I’d contend that we need to re-learn to tell our stories. Both personal and corporate (and by corporate I don’t just mean businesses but any corporate body, including political parties and the voluntary sector). We need to do that in a safe environment that incubates us from the habits of pre-truth.

Rowan Williams has written that what we might call proper truth “is not discovered merely by attending to the profundity of the heart’s affections; it asks to be tried at the bar of reason.” Fair enough, but it works the other way round too: the logos of reason is insufficient and truth must be won by the heart’s mythos too.

There has never been a greater opportunity for corporate storytelling than is offered by the digital era, all too often wrongly blamed, with its innocent inanimate techno-tools, for the post-truth era. The internet has delivered corporates with the means of production to own their own media, rather than to pay expensive (and today largely useless) PRs to influence the mainstream media. But they are unaccustomed to the disciplines of storytelling, no thanks to pre-truth habits.

We need to re-learn those disciplines in order to develop better corporate habits and learn to tell our stories again. It can be done, but it’s not easy, because it’s not just about the stories. It’s how we tell ‘em.

George Pitcher was Founding Chairman of Jericho Chambers and is an Anglican Priest. His latest novel, A Dark Nativity, is currently crowdfunding via Unbound. 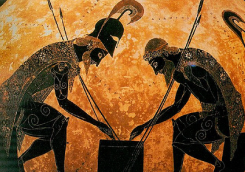