One hundred years ago society’s reverence for the professional classes was almost a given. Those days are gone. Restrictive practices and a reluctance to accept reform have contributed to a loss of public trust and respect. It may be possible for a recently qualified solicitor in his or her early 20s in the UK to join a US firm on £146,000 but lawyers don’t stand on the pedestal they once did. Indeed, paying those sort of sums looks increasingly like a highwire act destined for a fall. Aren’t lawyers simply business people with an eye on the bottom line like any other? After all they use meters like taxi drivers. The annual IPSOS Mori Veracity Index puts lawyers way down in the levels of trust to tell the truth at 60% compared to doctors or engineers who are up at 89-91%.

What makes a “professional”? When in 2013 the Parliamentary Commission on Banking Standards looked at banking – not long after the Great Crash of 2008 – it concluded that banking did “not possess sufficient characteristics of a profession to lend itself to direct control through a professional body.” Yet if one considers maintaining evidence of advice to clients and customers as a way of holding them to account, then bankers unlike other professionals such as lawyers have to maintain records of every phone conversation.  A banker was “struck off” by the FCA in 2014 for evading his train fares.

Their centuries old partnership model used by many professionals is now under stress. Growing numbers of mid sized law firms are seeking an injection of outside capital via UK public markets and this practice, previously forbidden in the USA, is now legal in Arizona. They are starting to embrace AI to perform the grunt work normally done by juniors. When companies such as Carillion or Wirecard go down, for example, blame is often placed on accountants – professional accreditations notwithstanding.

However, a professional is supposed to be an expert in her given field and the pandemic has certainly revised opinions about the value of experts – not least doctors and epidemiologists. That professions have moved with the times is not in any doubt, however, in their embrace of the market (along with its often high rewards), have the professions now opened themselves to criticism previously levelled at mere business people?

Finally, the professions were once – and largely remain – the domain of the middle class. A socially mobile shift from blue to white collar is not as easy as it should be – professionals are “Dream Hoarders” who want their offspring to replace them in similar well-paid, socially respectable roles.  There are now serious efforts by several of the large accountancy firms to set targets for social mobility. Only 14% of employees at PWC come from a lower socio-economic bracket and it wants a third of its partners to come from that group by 2030.

These Jericho podcast interviews consider all these issues and more. They are supported by Stifel Europe and its President Eithne O’Leary.

Anthony May was the founder of Hedley May, a high end corporate headhunter with a specialism in the legal profession. He founded Catalyst Lex in 2021 to advise major law firms on their most challenging and sensitive decisions and he advised law firms, Big Four accountancy firms, FTSE 100 corporates, financial institutions and Government entities on leadership projects since 1993.

Gareth Hunt leads the Law Firms and Litigation Finance advisory team in Investment Banking at Stifel in London and is one of the sharpest outside observers of the legal profession in the UK. He was one of the team that successfully raised DWF’s initial public offering, from which it raised £95m at a valuation of £366 million which made it the biggest UK law firm to list in the last decade.

Giles Gibbons can make a reasonable claim to have invented ESG consulting in the United Kingdom. He founded Good Business with his then partner Steve Hilton way back when the talk was of Corporate Social Responsibility. He believes professionals worldwide have a public duty to step up, find a public interest calling and help solve the greatest challenge of our age, climate change.

Samantha Mangwana practices employment law in Sydney, Australia. She qualified and practised in London where she developed a strong reputation conducting very high profile whistleblowing and discrimination against financial institutions, and less visibly, acting for partners in their disputes with global law firms. She knows what makes lawyers tick. 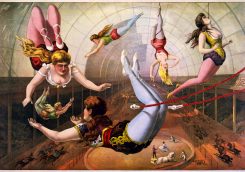