It seems like only yesterday that every business best-seller was a crooning paen about the Tech Giants. What Would Google Do? by Jeff Jarvis from 2009 argued that the Californian T-shirted guys and girls at Google were so smart they had the answer to everything on the planet. Nothing was beyond their capability to take on and improve. How times have changed. Those super-smart giants have been shown to have feet of clay. They have caused more problems than they have solved.

“Big Tech companies are like the newly powerful TV companies of the 1950s − not innovators, but attention merchants. They must acknowledge the affects of their activities, and take responsibility for them.”

Barely a week now goes by without the appearance of a book attacking the Tech Giants. The Brave New World turned out to be full of dodgy apples. We’ve had lounge lizard Andrew Keen moaning away at TED, Jamie Bartlett warning about the dangers of “crypto-anarchists” and Evgeny Morozov’s The Net Delusion. There was William Storr’s Selfie which says that social media has simply made us all — kids especially — more selfish, narcissistic and lonely. This week’s offering is Franklin Foer’s A World Without Mind. Here is a taster of his an-ti-tech broadside against Facebook which he says is no 60s dreamy, hippy exercise in bringing the world closer:

“In reality, Facebook is a tangle of rules and procedures for sorting information, rules devised by the corporation for the ultimate benefit of the corporation. Facebook is always surveilling users, always auditing them, using them as lab rats in its behavioural experiments. While it creates the impression that it offers choice, in truth Facebook paternalistically nudges users in the direction it deems best for them, which also happens to be the direction that gets them thoroughly addicted.”

As one might expect, the legacy newspapers are hostile to Big Tech. Their news is costly and real, Big Tech’s is frequently fake. (It takes both brains, integrity and money to come up with “Freddie Starr Ate My Hamster!”) But it took them a while to wake up and start attacking. They were slow to grasp the fact that tech has eaten their lunch by stealing all their advertising pounds and dollars, leaving many papers who cannot seek refuge behind a paywall facing ruin. Any day now we’re likely to hear that another UK industry consolidation has taken place as The Mirror buys the sorry, moronic mess that is porn king Richard Desmond’s Express Newspapers.

Over at The Independent Google has ripped them apart so badly they’ve taken investment from the Saudis and are now publishing pieces suggesting Harvey Weinstein and his behaviour would be less likely to occur in a proper Islamic social set-up.

Rupert Murdoch’s papers on both sides of the Atlantic miss no opportunity to goad Google and Facebook on a regular basis. However, behind the scenes negotiation is going on with Google and Facebook to persuade the US behemoths to promote paid newspaper subscriptions by bundling, because it’s their social duty to counter the ghastliness of Trump’s mendacity. Or something like that.

At the The Financial Times the estimable Rana Forooha is leading the charge questioning Big Tech’s power and lack of responsibility. She has been writing brilliantly in recent months on tax, fake news, monopoly and lack of corporate responsibility.

There is growing unease that the tech giants now actually innovate very little and, indeed, stifle innovation when they see it as they seek to protect their turf. They are like the newly powerful TV companies of the 1950s — not innovators but attention merchants, selling and controlling eyeballs. Why is it, for example, that newspapers or magazines, if they ran ads from known criminals, would be locked up — but search engines get away with it?

Simon Jenkins in The Guardian recently gave Zuckerberg and Google both barrels last week, chiding himself for ever thinking they had the answer to all our woes.

The internet companies, while pretending to be utilities not publishers, manipulate and censor news. They see humans as algorithm factories, bundled for maximum advertising revenue. The “global village” is no village at all, just trillions of zombie consumers hard-wired to a handset. Who on Earth thought it a good idea?”

The end of Jenkin’s Guardian piece is the customary, woeful request for funds via donation of a fiver towards his stipend.

So what is Big Tech going to do about its new status as Chief Villain, Public Enemy Number One in both the US and Europe? The big tech mob is now past the first flush of wide-eyed youth. It is moving awkwardly into adolescence — where others dare to question it and stand in its way. Unless technology companies face up to their responsibilities to society, demonstrate that they are positive corporate citizens, they, as we have seen with Uber most recently, face adverse regulation to force them into line.

Margrethe Vestager, the Competition Commissioner at the EU has been on Big Tech’s tail for years and is now achieving some big wins. (Not that her fines make much of a dent in the vast cash reserves many tech companies hold offshore.) Tim Cook of Apple may believe she talks “total political crap” but his company’s behaviours and tax affairs are becoming popular targets for more than just Brussels bureaucrats looking to make a name for themselves.

We are at the stage where Big Tech can no longer simply be a disruptor of older technologies and ways of working. It cannot just “move fast and break things” toddler-fashion, as Zuckerberg urged. It has to grow up and accept responsibilities. They have to acknowledge the affects of their activities — direct and indirect — and take responsibility for them. Whether they like it or not, they are publishers, and have to accept the need to curate and edit content. The adverse impact on mental health of social media, the continued threat of cyber-terrorism, the exclusion of sections of society and business (places and people) from digital access and are all failures that the digital community must face up to.

None of this is new in emerging and transformative industries. We’ve been here before in oil, in banking, in steel. As Simon Jenkins says in his summing up, “The internet is passing through the robber-baron phase of capitalism, as manufacturers did in the 19th century. Then, as now, governments were too scared to regulate companies, which grew big and arrogant, and collapsed. I bet this happens to the internet.”

Matthew Gwyther is a partner at Jericho Chambers and an award-winning journalist. He was Editor of Management Today for 17 years, and currently presents In Business on Radio 4. 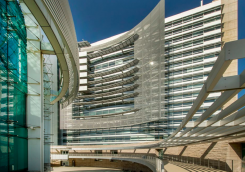