This is such an obvious one that I am embarrassed to be putting it in this edition of Revolutionary Times. It just seems like common sense.

What costs $100 billion a year and achieves nothing at all? Just a reminder – $100 billion is the sum Apple is planning to return to investors over the next few years. It’s what the world spends on bottled water every year. It’s around the annual cost of the NHS. It is a BIG chunk of money.

As well as all those other things, $100 billion is also the sum spent every year by the world on the ‘war against [illegal] drugs’. This is money down the drain. For this particular war is one that – rather like the War on Terror – creates millions of human casualties, but actually is unwinnable. During 1990-2005 the wholesale price of heroin fell by 77% in Europe and 71% in the US. In the last 40 years in the US the number of people imprisoned for drug offences has risen from 38,000 to more than 500,000. The lost productivity of this population is estimated by the US Office of National Drug Control Policy as around $40 billion/ year. The Mexican government alone spends around $10 billion annually fighting drug trafficking.

This is a colossal waste of money and lives. The mark-up on coffee – a legal drug – from the farmer to the consumer
is around 400%. For heroin – an illegal drug – the mark-up is more like 17,000%. Keeping some drugs illegal is destructive of economic development. According to Transparency International the world’s two main producers of opium in 2011 were Afghanistan and Myanmar, who – by no coincidence at all – also have the most corrupt public sectors in the world. More than 100,000 people have died in Mexico alone since 2006 in this ‘war’; every year more than 40,000 people in the US die from an overdose.

This month I launched a new website, www.thereaper.rip, which tracks all manner of incidents relating to death. One item we published recently concerns fentanyl, a drug we may well be hearing a lot more of. It’s a synthetic super-fast but short-lived synthetic opiate, designed for terminal cancer patients who need serious and swift pain relief. Fentanyl is 100 times more potent than morphine.

In the US there are growing numbers of overdose deaths from fentanyl-laced heroin. Just a small amount can be fatal – and of course drug traffickers haven’t a clue how to gauge the right amount. Nor do they care if the abuser dies – another one will be along shortly.

Our ‘war’ on certain drugs has failed. It’s time for a truly revolutionary approach to this dark and troubling problem. There is only one course of rational action: adopt the same policy as for legal drugs such as alcohol and tobacco – tax and control and restrict where they can be taken. Accept that any drug use is ultimately a matter of personal choice. There will be repercussions – but we can handle them, and at a much lower cost. 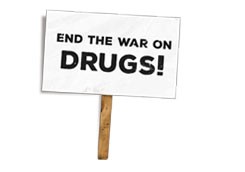