“The reality is that this isn’t a recession, this is a structural transition and my worry is that by framing this conversation through a recession perspective then you image a return to a previous normal”.

The latest in the series of Jericho Conversations podcasts finds Jericho founder Robert Phillips in thoughtful discussion with Indy Johar, widely celebrated as one of the UK’s foremost system designers and thinkers. This is not a recession, argues Indy, but a trigger-point for a much wider systems re-set that challenges centuries-old orthodoxies of economics, politics and leadership. There is an urgent need for true leadership to emerge beyond just the reactive nature of what we have seen in the crisis so far – because “not leading is not an option”.

“This isn’t a voluntary transition moment, I think it’s actually whether you’re viable in the next economy. This is not a moral crusade, it’s an operational model in a new society where interdependence is more valuable and more critical”.

Indy is an architect by training and the creator of multiple Impact Hubs. Dark Matter, his latest venture, is a field laboratory focused on radically redesigning the bureaucratic & institutional infrastructure of cities, regions and towns for a more democratic, distributed great transition – with offices and teams advising governments in Canada, Sweden and South Korea as well as the UK. Indy brings a truly global perspective – and scenarios and future models – to the current crisis. 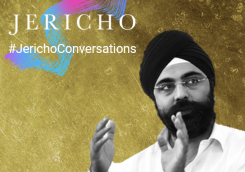