Although at a substantially reduced risk from the disease itself, the collateral damage caused by COVID has hit the young very hard. Not just economically but psychologically. Their education has been hugely disrupted and their job prospects once they leave education are now dimmer than for a generation.

There are over nine-and-a-half million children and young people in the UK aged between 10-24. To say that their futures are currently uncertain is an understatement. Their education, their prospects for work, their freedom to move around and associate with their peers and others. And, most importantly for many, the future of the planet. A lot to endure.

To gauge how the young are feeling about their futures and how they regard the job that their elders are making of running the world, this podcast by Matthew Gwyther explores the issues with three young people:

Ahmed, Leonora and Morgan were participating in an inter-generational conversation series at the heart of the Our Future Voice Now project.

Morgan was joined by his mother, Sophie. Sophie Howe is the Future Generations commissioner in the Welsh government – she’s unique in that her portfolio is designed to create and influence policy for the as yet unborn. Morgan, the eldest of Sophie’s five children, is 21 and has a job working for the insurance company Admiral in his native South Wales.

“The whole point of school, I thought, was to prepare you for life but it doesn’t seem that way at all. It’s only prepared you for the exam at the end of it”.

Matthew then spoke to the author and businesswoman Margaret Heffernan and her daughter Leonora who was hoping by now to be well embarked on her career as a theatre lighting designer. With theatres dark, she is having to rethink her career plans but like the ballerina in the government advert isn’t quite ready to renounce her dream and become a cyber security expert.

“Not only can you not do what you want to do, but the government is actively telling you not to and isn’t supporting most people”.

The programme begins with Ahmed Ibrahim from East London who is a second-year student at the University of Kent. He didn’t get what he signed up for and just before recording had discovered that he was required to self-isolate as one of his fellow students in his shared house had received a warning that he’d been in contact with someone who had caught the virus.

“Young people are not sure what to do, who to contact… imagine for a first-year, you’re locked down in your student accommodation with a group of 8-12 other young people that you’ve never met in your life”.

The Our Future Voice Now programme is curated by Jericho with generous support from Barclays LifeSkills. To get involved please contact our Programme Director becky.holloway@jerichochambers.com. 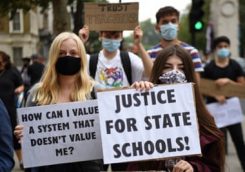