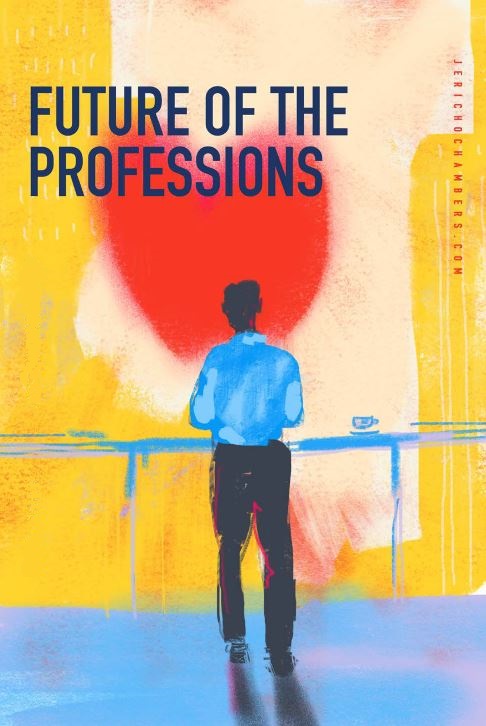 As Yuval Noah Harari argues in 21 Lessons for the 21st Century, fake news is much, much older than either Facebook or Donald Trump. “Humans”, he writes, “are a post-truth species … (whose) power depends on creating and believing fictions… If you want power, at some point you will have to spread fictions. If you want to know the truth about the world, at some point you will have to renounce power.”

Business leaders committed to the common good must chart an ethical course balancing truth and power and be willing to slay some mythical beasts of business. This belief runs to the heart of the Jericho project and our own commitment to meaningful change.

The professions have a critical role to play in this transformation. Their own power, influence and relevance have been dramatically diminished in recent years. Sometimes, as we charted in the summer edition of Jericho Times, they have only themselves to blame.

Historically, the professions stood independently of both “state” and “enterprise” as agents of change (with their own charters; codes of ethics & conduct; sanctions; even charging structures) in response to major shifts in the industrial landscape. Hence their emergence amid the turbulence of the end of the nineteenth and early twentieth centuries. Their independence was eroded first by Thatcherism and then accelerated by a late 20th century drift towards an obsession with “client service”.

Putting client needs (and sales) first is not always compatible with the common good. Neutrality has too often been compromised – the “state” has sucked the professions into its own world of regulation & compliance while certain institutions have, like other commercial bodies, become poorly fixated with client service & chasing revenues. The harsh reality – as Jericho Associate Indy Johar has observed – is that some professional bodies have been reduced to market agents and their public good remit diminished in a two-actor, split world. What we are all looking for is fresh leadership on public good and the definition of a new structural place in a complex landscape: the re-establishment of the third actor.

This edition of Jericho Notices celebrates recent work in this space.

In this podcast, in association with investment bank Stifel, Matthew Gwyther hosts a conversation about the structural and financial fragility of the UK’s professional services firms. Not all is quite as it seems. Just as hopes for a post-Brexit Britain are optimistically pinned to a flourishing professional service sector, so that sector may need a wholesale re-think before a ticking time bomb (or two) explodes. Jericho’s exploration of the flux and fragility question continues with a series of roundtables through the autumn. Audit and accountancy have, of course, been in the summer firing line, precipitated by spectacular corporate collapses, ranging from BHS to Carillion.

But as this essay, jointly penned by several Jericho partners, argues, it is all-too-easy to wag fingers and apportion blame to the bean counters. Questions need to be asked not just of audit and accountancy but of the very issue of institutional accountability in the 21st century.

Solutions, like failings, need to be systemic – fit for purpose in a chaotic and complex, digitally-driven 21st century economy. We consider what this might look like in practice – a healthier option than a return to 1970s statist intervention or a 1980s adoration of unbridled free markets. Our longstanding work on Responsible Tax with KPMG reinforces the need for systemic and wholesale change.

The Built Environment, like audit and accountancy, is another sector under considerable pressure – on issues of housing quantum, costs and affordability; regulatory frameworks and codes; (fire) safety and security; fuel poverty; infrastructure needs; localism (or lack of it) and much else besides. “What Kind of Britain Are We Building?” was the question asked to kick-start a 2018/19 programme for Building Research Establishment  (BRE Group) and captured in this article and podcast. Please let us know if you would like to participate in this or any other Jericho programme.

In addition to the themes outlined in this note, Jericho’s client initiatives on the future of work, housing, transport, the digital economy and The Caring Society (just underway, supported by Grant Thornton) continue to flourish – all built on a model of openness and co-production. We do not have all the answers. Nor do we attempt to impose top-down solutions. Our collective futures, as Neal Lawson likes to say, can only be negotiated, not imposed.

Please do stay in touch and involved.