The trouble with socialism is that it takes too many evenings. Oscar Wilde

I was reminded of that Oscar Wilde quote toward the end of Naomi Klein’s recent talk at the South Bank Centre in London (Tuesday 4 July, 2017). Her new book No Is Not Enough picks up on the themes explored in her other works. These include the overweening power of brands and the inequities of globalisation (No Logo), the role that so-called ‘disaster capitalism’ has played in re-shaping the world to serve the insatiable desires of neoliberal elites (The Shock Doctrine), together with her work on the rapidly approaching cliff edge of climate change (This Changes Everything).

No Is Not Enough (and its central character Donald Trump) represents the apogee of Klein’s earlier works, and her clearest call to action – a field manual for the resistance. It is unashamedly written as long form reportage – a page turner mining the rich seam of busy insanity we have all endured in the brief window between Trump’s inauguration and the book’s publication in June. It’s also an attempt at a counter narrative. Her previous books were good on the diagnosis – in this case that President Trump was entirely predictable and here’s why – but Klein acknowledges they spoke less well of what we (progressives, activists, indigenous groups, business, pretty much anyone with a stake in the enduring future of planet Earth) were to do by way of an effective response. In short, saying no is easy. We have to get to work on a more profound and compelling yes.

During Klein’s conversation with South Bank Artistic Director Jude Kelly there was much invocation of the hard work that was now required to bring forth our better selves. Coalitions formed as much across the backyard fence as across global communities of shared interest. The drafting of a new manifesto (1) that can reconcile the proximate demand for good work, the closing of a pernicious inequality gap, the retention of precious cultural idiosyncrasies, and, most crucially of all, a healthy biosphere. If politics is the resolution of conflict, then to do all that we are going to need a lot more politics. And if politics follows culture, then it’s the culture that needs to change if the politics is to deliver on its promise. The Right figured that out a little while ago. And, well, here we are.

All politics is local

We see present echoes of who we really are or could be in the response to the recent terrorist attacks in the UK and atrocities like that at Grenfell Tower in London – a deep and ineluctable empathy that transcends geography, class, race and religion. It’s a muscle memory that recalls what every child realises when they are first introduced to the workings of the human body. That beneath the skin, in all our naked fragility, we have much more in common than the wafer thin edifice of nationalism, racism, and ‘othering’ that is built to divide us. The trick lies in training that muscle memory, to pursue what Raoul Martinez calls ‘unbounded empathy’ (2), and to help it endure beyond the next news cycle. To do that, we are at least going to have to meet, communicate, celebrate difference, debate, argue, get active and finally come to painful agreement. Those evenings again.

…beneath the skin, in all our naked fragility, we have much more in common than the wafer thin edifice of nationalism, racism, and ‘othering’ that is built to divide us.

Inertia, the status quo, ‘common sense’ (ref. Antonio Gramsci (3)), ‘there is no alternative‘ – these are, paradoxically, powerful forces. They imply certainty, endurance and stability, when we know our most recent experiences – the financial crisis, the climate crisis, the refugee crisis – indicate otherwise. There is nothing certain about the nihilistic death spiral in which we are locked, except that the end will not be pretty and the poor and the vulnerable will suffer the most.

But what if this is our generation’s moment? As existential as the drumbeat toward World War II, but vastly accelerated across time and space. And if we are living through what Dr King called the ‘fierce urgency of now’ then how can we ensure our response will be commensurate to that task? This week the G20 is meeting in Hamburg and all talk is of the body-language between Presidents Trump and Putin. That’s right, that’s what we are up against. The zero-sum game of a kind of geopolitical man-spreading – the security of the planet resting on whether two guys testicles can co-exist in the same tube carriage. We do indeed have our work cut out.

What if the activist tendency can be invoked in all of us, and not just on a Tuesday evening in a draughty church hall? What if it could be the new normal, our daytime gig rather than a side hustle? A kind of happy, highly productive, chaos. Is that possible? Is anyone doing it well?

At a Financial Times hosted breakfast discussion (6 July) on the impact of the declining public trust in business, Robert Phillips (co-founder of Jericho Chambers and author of Trust Me – PR is Dead), exhorted business to go beyond the tired platitudes of trust, transparency and values (insert company name here). ‘Bullshit surveys, bullshit PR, bullshit CSR’ no longer cut it. We are living in an age of activist shareholders, activist employees (ref. Charles Handy (4)), activist consumers. At the least this means companies doing more than pretend to listen to their employees – it means ‘fostering dissent’, relishing disagreement, encouraging a more emergent and inclusive approach to business that stands for something.

A few years ago the corporate reputation management consultancy Reputation Inc, published a thought leadership piece on a related theme. The Rise of the Activist Company recognised that if business is ‘woke’ to the need for a more sustainable social, political and environmental future then it will need to become more activist to achieve that goal. Individual businesses – even very large ones – cannot do it alone and the response cannot be half-baked. Business will need to secure coalitions across sectors and borders, it will need to provoke, to act as a critical friend to governments, to challenge its own investors, and it will need to lean in and develop humility in its dealings with civil society. All of this will involve learning new skills and adopting different behaviours and processes. This is easier said than done. Paul Polman of Unilever has been a vocal proponent of this methodology, but as Robert Phillips pointed out, he has done so from a somewhat lonely place and, as recent experiences have demonstrated, a highly vulnerable one.

My particular interest is in what all this might mean at a practical level and from the perspective of a discipline I have occupied for many years. It’s clearly something more radical than a better fusion of public affairs, PR, CSR and strategic HR. I would, however, argue that there is some value in those disciplines working together more effectively and being more highly sensitised to the views of less proximate or vocal stakeholders, internally and externally. There are canaries in this coal mine and they have been practically screaming at us all for years. It’s axiomatic to observe that Brexit and Trump are the inevitable outcome of our ignorance and we need to learn from that. But what is needed now is clearly much more than a bit of active listening.

We have, of course, witnessed a number of corporate attempts at political and sociological engagement, with mixed success and sometimes dubious objectives. Pepsi acknowledged that they called it wrong in co-opting the semiotics of (benign) protest to sell more fizzy pop. More heinous, and certainly more dangerous, than that is Bell Pottinger’s alleged involvement in an old-fashioned (albeit with new tools) political dirty tricks campaign in South Africa.

Set against these poor examples are more thoughtful campaigns by consumer brands trying to raise the bar of the public debate. Heineken’s ‘Worlds Apart’ campaign quite literally forced political opposites to ‘raise the bar’ before cracking open a beer and discussing their differences. Whilst it received some criticism for being ultimately still focused on just selling more beer, many acknowledged that it came from a genuine place and the execution was well judged (people were not so kind about that Pepsi ad!). At the more corporate level, companies in Silicon Valley and elsewhere were very public in their criticism of Trump’s travel ban and this seems to have been well received by consumers and employees alike. Nevertheless, the mixed reaction to corporates getting political shows how difficult it can be to pull this off.

‘If you don’t stand for something, you’ll for anything. Harder than you think is a beautiful thing.’ Chuck D. Public Enemy

In case you hadn’t heard, the world is in crisis. The Doomsday Clock is now half a minute closer to midnight and, I don’t know about you, but it’s getting hot in here. The question is, what do we do about it? For ‘socialism’ in Wilde’s quote read ‘achieving a better world’. If our better selves, as business leaders, as employees, as consumers, as citizens is to deliver the kind of war-footing response we need, our activism cannot be confined to the evening. It has to be pragmatic and engaging enough to involve a much larger section of the population than professional activists, and yet still drive systemic change in our politics, our economics and in our response to climate science.

What I am grappling with is in what it means in a work context – not at the level of business leadership or corporate governance, but at the level of the cubicle. To that guy, over there. The one I have never spoken to. What does it mean to him on a Monday morning and does he even care? Not everyone has the courage or the agency to be like the character Peter Gibbons in the brilliant comic movie Office Space and just not show up anymore – activism as absence. So if no is not enough, is it possible to create the space for everyday activism, to do it well, to reconcile the goals of individuals, business and society in a creative, engaging and purposeful way that gets us closer to the ‘YES’ we so clearly need?

Answers on a Post-It note…

Richard Brophy is a specialist in corporate responsibility and sustainability. This article was written in a personal capacity. He tweets @richardbrophy

(1) For details of the ‘Leap Manifesto‘, which Naomi Klein played a part in creating, click here.

(2) You can watch Raoul Martinez, author of Creating Freedom, presentation at the RSA here (11th November 2016).

(3) Journalist Paul Mason is good on the contemporary relevance of Italian Marxist Antonio Gramsci in a recent Guardian article here. (‘Jeremy Corbyn has won the first battle in a long war against the ruling elite’, Monday 12 June 2017).

(4) Robert Phillips referenced Charles Handy’sThe Second Curve, with the quote that, ‘in any corporation, 80% of the workers are disengaged and don’t care, while 25% of the 80% would actively sabotage the organisation they work for.’

‘Deano’s Cubicle’ by Taminator published under a Creative Commons license 2.0 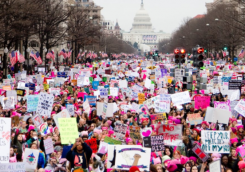