In the latest in a series of extracts from important, new books by Jericho friends, welcome to The Monday Revolution by David Mansfield, former Chief Executive of Capital Radio; now serial NED and angel investor. Discover David’s six steps towards taking control of your business life, from learning how to invest your time wisely to finding better ways to solve problems and make efficient decisions.

Jericho founder Robert Phillips describes The Monday Revolution as: “delightfully waspish and witty, punchy and practical – a Just Get It-Done manifesto for our over-complicated, jargonistic business times; a must-read.”

In 1976 Bill Grundy, the anchor man on Today, a Thames Television ITV show, was unceremoniously fired. He never appeared on prime-time television again, in what came to be subsequently recognised as the defining moment of a revolution that lasted several years and upended the music industry.

His crime was to encourage the lead singer of the Sex Pistols Jonny Rotten, and guitarist Steve Jones, to verbally assault the viewing public with a stream of obscenities on prime-time TV. As a result, the punk music revolution went mainstream and what had started as a grass roots protest against manufactured popular music and the establishment in general, spawned hundreds of bands, re-invented the fashion industry and unleashed the frustrations of a youthful generation eager for change. These were exciting times.

Although part of that era, I can’t claim it was the catalyst 40 years later for my book, The Monday Revolution. But in many ways what The Sex Pistols achieved that night in music represents what I’d like to achieve revolutionising the business world. How? By replacing the bland and ordinary with a more immediately effective and dynamic approach to work and life.

Acceptance of the natural order in our lives tends to be what we go along with, because we believe it’s mostly how things get done. As I explain in my book, it’s generally only when something left field shows up that we reassess our behaviour.

The business world is littered with mis-steps and poor decisions that often result in catastrophic outcomes for companies and in some instances entire industries. When new management is parachuted in it inevitably takes a company back to basics. The equivalent of wiping the hard drive. Retaining the core of the business but sweeping away the many additional activities and components that have slowed or distracted the organisation. And so begins another cycle.

But what if we could act sooner and not wait for the life-threatening moment. What is so wrong with seizing control now?

Six Steps towards The Monday Revolution

Invest time wisely. It’s always in short supply and not easily stored for another day. An invaluable resource. The revolutionary spends their time on the right things each week to improve the chances of effective results and maximum satisfaction.

Find better ways. Around you there are many examples of better ways to solve your own problems and create compelling opportunities. Learn to look outside.

Simple, not complicated. Revolutionaries are mission clear. Too many moving parts and you’ll increase the chance of failure. Avoid the trap of trying to solve complex problems with complex solutions. Whatever you’re doing or saying, keep it simple.

Now, not later. The enemy of effective working is procrastination. What is wrong with now?

Evidence-based decision making. Sometimes there will be little to go on. But this is rare. More likely, the facts are there, but overruled by emotions. Be strong. Look for evidence to back up decisions. Before you decide, how do you really know?

The Monday Revolution is my mission to change your personal approach to business and life. At the moment it’s my one man campaign, centred on simple ideas. But I’m confident of recruiting like-minded others. Feel free to join.

In the course of my work, be it running companies or helping and observing others, I’ve concluded that so much in every organisation could be changed, at no financial cost, for the better.

Endless meetings, useless reports, layered decision making and pointless awaydays clog up the majority of businesses and the working weeks of people I meet. I’ve committed such crimes over many years because I too thought this is just how things are. I share their guilt.

The Monday Revolution is a metaphor for change. But it doesn’t necessarily require direct confrontation, as in most instances subtlety and stealth will be more effective. But whatever the given context everyone can quickly seize back some control of their lives, in so many ways. The book shows you how.

A look in anybody’s calendar will tell a similar story. Arrangements that will produce very little in either productivity or personal satisfaction. We all know that reward to comes to us through achievement. Taking something on. Having a plan attached to a desired, final result. Organising our time to get the things done that matter. This is what we need to do more of – now.

Every story in the book, and there are many of them, is a practical example of what can be changed for the better, starting on Monday. Organised in short chapters with bullet points at the end of each enables the reader to quickly convert the advice into immediate action at the start of their week.

Darwin is often quoted for his observation that it is those most able to adapt and change that survive. And that’s what I’m talking about. The recognition that changes in behaviour, which we can personally control, will magnify our effectiveness and allow us to look ahead with a positive mindset. Work is there to be enjoyed not endured.

Let’s not hang about. Seize control of your business life and join The Monday Revolution. What is wrong with now?

Explore The Monday Revolution at the Club at the Ivy, London WC2, on Thursday 5 March – coffee and croissants from 8.15am. David Mansfield will be interviewed by Jericho Founder Robert Phillips, author of Trust Me, PR is Dead and The Trust Delusion (and how to avoid it), and will be joined by Professor Lynda Gratton, London Business School, future of work guru and award-winning author of The Shift and The 100 Year Life. To request a ticket, please click here and follow the link to apply to the Ivy Club directly. 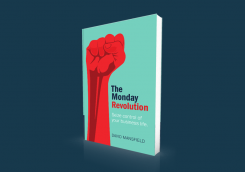