May Day! My father-in-law, who once worked for Enoch Powell, calls it Michael Foot Day, after the Secretary of State
for Labour who introduced it as a public holiday in the UK. A public holiday for the workers. But May Day goes back to at least 1886, when on 4th May in Chicago workers and police were bombed by anarchists at a demo calling for an eight hour day. From the late 19th on, communists and socialists claimed the day as their own. From Red Square
to Trafalgar Square it was the day of international solidarity.

May Day 1968 saw the publication of the May Day Manifesto – edited by the incredible Welsh cultural theorist Raymond Williams. The Manifesto was an outcry against the limitations of the then Harold Wilson-led Labour government. Against the backdrop of the Vietnam War, the Manifesto created the shift that would eventually see the left move into the Labour Party and take it to the brink of extinction under Tony Benn and then the giddy but vacuous electoral heights of Tony Blair.

One of Williams’ most influential books was The Long Revolution – which does what it says on the tin – and describes the need for incredible patience in making change happen. There are no short cuts. Everything, Williams warned us, has to be taken into consideration – language, framing, alliances etc. Otherwise, the revolt, the revolution – the turning of the wheel by 360 degrees – just means you finish up where you started because you forget that means always shape ends. From Communism to Thatcherism: freedom in the name of the people became dominance over the people. The good society can only be built by doing good. If you want to be a rebel, then be kind.

Where will the workers be this May Day, other than deciding whether to place their cross by Labour, the Greens, the SNP or nowhere? I feel huge ambivalence about the politics of class. I know ownership matters and that class divisions scar our nation in ways our riches should never allow. But the working class is under threat. The rising class is the precariate – something between the proletariat and its lumpen underclass – a rising class of those on zero hours’ contracts and the labour market shadows. But the emerging threat to workers is the robot, the algorithms and mass data that are set to replace human labour and the human brain. To labour is to toil, sweat and endure. Is it passing and, if so, should it be mourned?

Instead of a life of little dignity through labour, what about a life in which productivity is shared and we fish
in the morning and read poetry in the afternoon? That wouldn’t take a revolution, but instead a conscious and steady shift to the politics of the common good and a new social solidarity that unites all humanity – not just one class. I’d march for that. 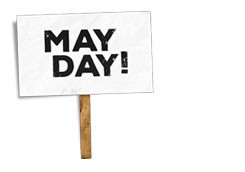