Hugh Thomson is an award-winning documentary maker, explorer and travel writer. He has been around the world in search of places and stories. His descriptions of his road trip as a teenager through Mexico, in his book Tequila Oil, is a joy. The idea was that he would drive a battered Oldsmobile gas guzzler from El Paso down to Belize and sell it for a fat profit. The car, it turned out, was worthless. He was told the best thing would be to take the car to the beach, pour gas over it and torch it and claim the insurance. “There is no insurance,” said Hugh. “In that case you’re fucked. Have another margarita.”

Last year Thomson went on a gentler trip on roads a bit more familiar to us – those of the Suffolk coast. This time it was fuelled by the occasional pint of Adnams and he stayed in their pubs in Aldeburgh, Walberswick and Southwold.

It had been 50 years since he had been on schoolboy holidays on this coast. He remembered a quiet place of green lanes and wide estuaries. He was wary of returning because it might spoil the wonderful memory. People kept telling him it had changed for the worse; it had gentrified.

He need not have worried. In a lovely lyrical piece in The Guardian he revisited the memories of his childhood and concluded: “There is a constant trope in travel writing: that places once had a golden age that has now been lost. All my life people have been telling me this about many of the places I love around the world – Machu Picchu, Deià in Mallorca, the Greek islands. They then always add, ‘Of course, when I went there it was unspoiled and perfect.’

He continued: “It is all too easy to burnish the past with a glow. However, I think I prefer Suffolk now to the way it was 50 years ago. Some of the simpler pleasures may have vanished. But there is nothing wrong with having 20 varieties of ice-cream to choose from. I like my life and my television in colour. And back then, I would never have been allowed to sleep in a pub.”

Many of us who live or holiday on the Suffolk coast may worry what the next 50 years will bring and many dread ‘change’. But I think we are in a great position to embrace many of the changes coming our way – how we work, how we eat, where we play, how we communicate and travel. And what energy fuels this activity.

Some of Suffolk is still a “postcode lottery” when it comes to broadband, but speeds are improving all the time and this may encourage more people to make the county their permanent home in the knowledge that it can also be their office. That is a good thing for thriving communities. And the area is still comparatively empty, leaving room for carefully considered new developments of the type seen in Snape and Aldringham.

Suffolk Coastal, as we used to call it, has become a centre for foodies with great restaurants and pubs with food. The Lighthouse in Aldeburgh has been my favourite British restaurant for years. Adnams may have a near monopoly on beer but it is a proper brewery producing proper ales. Locally produced food is becoming more sought after and farmers are responding with variety, quality and a growing number of farmshops.

We are blessed with a beautiful coast and hinterland, laced with footpaths and lanes, which even with increased traffic, remain for the most part empty. Cycling, which brought me here for the first time 22 years ago, is still a joy. My unspoiled and perfect memory is of a stoat stopping to look at me as I cycled down the road from Thorpeness to the higgledy-piggledy rooftops of Aldeburgh. I saw one of its relatives on the same road this year. Walking, especially with binoculars for bird watching, is a lovely way to slow down. What we have is what many people want now.

You will note that what I’m talking about preserving and enhancing is now known as slow living –  a movement to encourage a gentler life – which, ironically, is gaining pace (although I remember being enthused by many of the same ideas in Charles Reich’s The Greening of America, some fifty years ago.)

Now it is the greening of our energy supply which is causing much angst, with more wind farms due to appear on our coastal horizon. It is less the wind farms than the threat of Sizewell C nuclear power station exercising those who see its construction blighting their homes, clogging roads and ruining some countryside. It’s been over fifty years since nuclear power was first generated in Suffolk. We learnt to live with Sizewells A and B; and I’d like to think that in the years ahead we can find a way to continue our slow living – and keep the lights on. A Margerita anyone? No, make that a pint of Adnams.

Charlie Burgess was a Fleet Street journalist, occupying senior executive roles,  for over 30 years. He then worked as a self-employed media advisor for ten. His clients included a green financial company (Climate Chanel Capital), a hydrogen car company (Riversimple) and a peer-to-peer lending site (Zopa). 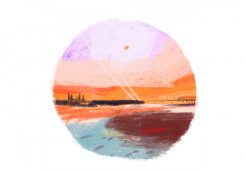