This podcast – the second in the series in partnership with Stifel Europe – looks into Artificial Intelligence and disruptive change.

The COVID crisis is giving many pause to consider disruption. Especially, that brought about by tech and AI. We all wonder about the direction in which it’s taking us.

Track and Trace for example, is a new concept to most of us and would have been impossible to enact even a decade back. But now it is unquestionably a vital weapon in the fight against the pandemic. What are its ethical limits? To what extent are some tech disruptors creating Frankenstein’s monsters without realising the full consequences?

More broadly, is there a danger of sleep-walking into another crisis, partly tech-enabled, such as the great financial crash of 2008? How does the disruptive forward march of technology and the imminence of AI change the way we think and behave as leaders? What are the implications for regulatory frameworks?

The podcast discusses these challenges with a number of acclaimed experts.

First, Professor Sir Nigel Shadbolt, who could probably be called one of the godfathers of AI in the UK. Now Master of Jesus College Oxford, he’s a long-time friend and associate of Tim Berners-Lee, the founder of the World Wide Web. Together, the pair founded the Open Data Institute.

Second, is Mikael Down, who is Executive Director at the Banking Standards Board. Mikael is an economist by training but has worked at the UK Treasury and the Financial Conduct Authority; he’s now doing a PHD on AI. Mikael is especially interested in artificial intelligence and how it works in financial services. So, what does he think about algorithmic injustice which has been put right back onto the agenda by the recent Black Lives Matter protests?

Third, Ivana Bartoletti is Technical Director at Deloitte with a special interest in data privacy. She’s just published her book ‘An Artificial Revolution’ on power, politics and AI: a hard-hitting feminist critique of many practices in the tech world.

Finally, Bruce Daisley. One rarely gets the chance to quiz those at the top of Big Tech but Bruce, who recently stepped down as EMEA Vice-President of Twitter, has stepped up to the Jericho plate. He runs the top business podcast ‘Eat. Sleep. Work. Repeat.’ His first book, about improving work and work culture, was a Sunday Times No.1 Bestseller and he’s currently writing another book on identity and resilience.

Click here to listen to the full-length interviews with Sir Nigel and Bruce Daisley – in which the former talks about NHS tech shortcomings and the latter about what it’s really like running Twitter. 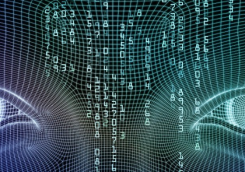