Ben Rogers is founding Director of Centre for London. A shorter, edited version of this was published by the Financial Times.

Cities exist because they are so much more efficient and productive than any other form of human settlement. By bringing people together in close quarters, they lower the cost of producing and consuming goods and allow for the sharing of scarce resources. The intense human interaction that cities make possible stimulates the generation of new ideas, discoveries and technologies.

Yet our largest, most creative and cosmopolitan cities suddenly feel vulnerable. The secret ingredient with which they turn base metal into gold – density – can make them a great crucible for disease. Madrid, Paris, London and New York were among the areas hardest hit by corona, in part, no doubt, because these are some of the most globally connected places on the planet, but also because people live, work and travel cheek to cheek. With governments forbidding people from mixing, mayors warning us off public transport and commuters learning they can work from home, you can see why urbanists, city leaders and businesses are worried. It seems all too possible that those who live and work in these cities will vote with their feet – or more likely their cars. There will be powerful anti-city forces – out-of-town developers, car makers, road builders, oil companies and the champions of conservative, small town, small state values – cheering them on.

But news of the city’s death has been greatly exaggerated. Yes, the years ahead will be very uncomfortable ones for many urban businesses and for mayors, who will see their current funding models falter. But relations between disease and density are complicated. Some highly dense cities like Seoul, Taiwan and Singapore, have successfully supressed the virus while some lower density places, like Lombardy and Louisiana, have seen it spread fast. London now has a much lower infection rate than the North East. Within individual cities too, some groups have been much harder hit than others.

Contagion is just one of a family of ugly problems, along with pollution and congestion, that come with city living.  And like pollution and congestion, there are ways of managing it. Cities will need to be especially rigorous in instilling habits of personal hygiene, testing and tracking visitors and residents and doubling down on overcrowding in all its forms. But these are perfectly practical, at least in well run cities.

In fact, corona could lead, longer term, to the development of smarter, younger and more dynamic urban economies.

Lots has been written about the way in which lockdowns risk worsening inequality by privileging well-paid knowledge workers able to work from home. But the switch to homeworking does suggest a real inefficiency in the way we utilise urban space. We now see that across the globe hundreds of millions of commuters unnecessarily leave their homes empty at the start of every working day, travel on polluting and over stretched transport networks, only to leave their offices empty at the end of it.  Face-to-face interaction remain all but essential to the successful working of most enterprises, ensuring that cities have a future. Many of the organisations that are wondering whether they can do without offices are drawing down on a finite fund of social and human capital built up through face to face interaction – a fund they will have to replenish at some point.  But we don’t need to meet face to face all the time.

Lots has been written too about the uncertain future for the visitor and hospitality sectors which rely heavily on close physical proximity and tend to be concentrated in successful cosmopolitan cities. But Corona is already encouraging the further digitalisation of our economies, as we spend more time learning, communicating, working and entertaining ourselves online. And cities like London, Paris, New York, San Fransico and LA lead the world in tech and on-line creative content, as well as online business services. Yes, some markets will go more local, as consumers stay close to home and government and businesses try to cut the spread of infection and increase supply chain resilience.  But others could go more global, as we spend more time online – to the benefit of global cities.

We have heard much about the uncertain future the public transport systems on which cities depend, as social distancing and public fear of infection lead to a decline in passenger numbers. But it does not necessarily follow, as many assume, that that we will all return to our cars, making cities more polluted and less popular. Where people have to travel, they can be encouraged to use buses and trains at less busy times – another efficiency win. And with the right policies we could see a big rise in walking and cycling – especially as e-bikes, scooters and other emerging ‘micro-mobilities’ dramatically increase cycle range. In fact, corona could result in a decline in the role that cars have come to play in cities, as a fall in public transport use leads to increased demand on road space. Mayors around the world are already grabbing the opportunity presented by coronavirus to reallocate carriageway to pedestrians and cyclists. The obvious move is to make this permanent, while using pricing to discourage car ownership and use.

Again, many are predicting a big resurgence in suburban and rural living, as older and better off city dwellers, who are most at risk from Covid-19, abandon cities. But that could leave more room for younger people to move in, and these often contribute most to urban dynamism. Around the world there is massive unmet demand for city homes and workspace. The idea that centre of London, Paris and New York will turn into tumbleweed towns is fanciful. The demographic and economic makeup of these cities might change, but people and business will still be jostling for space near the centre.

Cities have always worked particularly well for young people. They flock to them to build up vital social and professional networks, meet their mates and learn how the world works.  They are also the ones who will find it easiest to adapt to new ways of moving around and contribute most to online innovation. The city is not dead yet. In fact, it might be about to get a lot younger.

Research on London’s “human heart & soul”, conducted by CfL on behalf of Capco will inform the tenth #JerichoConversation, Business Life After the Virus:London in Recovery. The session will be led by Professor Tony Travers, LSE alongside Georgia Gould, Leader, Camden Council; and Justine Simons, Deputy Mayor, GLA plus more speakers to be announced soon. 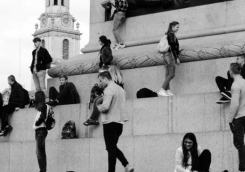