It isn’t often that members of the global tax community can claim that they can help save the world. But now might be one. The carbon in the Earth’s atmosphere is at its highest levels in 800,000 years according to observations made at the Mauna Loa Observatory in Hawaii and it’s clear that the effects of a warming atmosphere will likely be felt more quickly than anticipated. The weather events of this last summer bear this out. The need for action is agreed by organizations from the UN, through the EU to the OECD and The World Bank. Many experts have concluded that without a global carbon tax, any temperature target will likely be exponentially far harder to meet.

The Intergovernmental Panel on Climate Change (IPCC) report of August 2021, from 234 scientists in 66 countries, said there is “unequivocal” evidence that humans have driven the crisis, and the world’s aspiration of keeping global temperatures to 1.5C above pre-industrial levels risks slipping beyond reach without urgent action.

This concern is taken up by an increasing proportion of the population. Public anxiety about global warming is growing and this might make the political acceptability of taxes to counter the impending crisis more palatable.

The debate on carbon has extended and grown from being the preserve of extractive industries such as oil, gas, and coal to farming – bovine emissions are now under the microscope – travel, the built environment, retail, and even services. No sector escapes attention and the responsibility net has spread ever wider. Society is in this together.

However, does the use of carbon pricing for addressing climate change have any possibility of ever being implemented widely? And what is the best mechanism to achieve that pricing –a carbon tax or a cap-and-trade system? These are critical issues that are expected to be discussed at COP26 in Glasgow in November.

In the summer of 2020, KPMG and Jericho held a series of roundtables, bringing together corporate and global institutional tax specialists and campaigners, to discuss tax policy in the wake of COVID-19. This was viewed in the context of over US $11 trillion of fiscal support measures provided by governments during the pandemic, and whether the crisis provides the opportunity for deep structural reform to include combating climate change.

If economists theorize, then those whose business is tax understand the practicalities of putting theory into action. When it comes to climate change, tax professionals possess knowledge through experience of what works and what doesn’t plus creativity to encourage new ideas and technologies. This wisdom should be put into action rapidly.

The costs of inaction come later in the form of harm to future generations — rising sea levels, destructive heat and wild weather patterns, and social and political turmoil. The market has yet to properly account for these “external” costs because they are not embedded in the prices of the carbon-intensive goods produced and consumed now. As a result, those costs are ignored, carbon emissions rise, and the burden falls on others down the road in the future.

It’s intergenerational. This is an unusual, maybe unique, quandary for tax-raising governments. Certainly, bridges and hospitals will be used by future generations but have the same utility and value to those who pay for them in the present, as well. The climate change argument is tilted towards the protection – or avoidance of disaster – of generations to come. How can tax be the policy bridge between the past, present, and future in which carbon has been over-utilized and should have a zero impact as soon as practical?

The numbers remain problematic. Indeed, accurate measuring remains difficult in the whole ESG world – it’s a relatively new phenomenon. How one measures these future externalities is far from straightforward. The data going into predictive models involves various discount rates and significant assumptions, yielding vastly different estimates. In addition, there is disagreement about whether to attempt to include costs associated with unknown but potentially catastrophic events caused by climate change, such as reduced biodiversity or even war. And, of course, there are those who deny the existence of climate change in the first place.

However many “ifs” and “buts” there may be put forward, a good time to start is now. The current climate with a global COVID-19 pandemic potentially past its peak presents an opportunity for a ‘deep green recovery’ that can provide the dual benefit of increasing investment while decreasing environmental damage. Now is an unprecedented time to invest in innovation, new technologies and regions that have yet to develop a green industry.

To decarbonize we need both to expand existing technology – solar and wind – and to create entirely new technologies. Hydrogen, for example, has grown from a problematic energy source favored by a small minority of enthusiasts to a far more mainstream answer in the last 2-3. Nuclear power has a separate set of issues all its own. There will, one hopes, be many more hydrogen-style solutions uncovered with sufficient ingenuity in the coming few years.

There are twin approaches to driving change: tax and incentives. These deal with the here and now plus the future and how technologies might mitigate the effects of CO2. The EU has traditionally led on tax and the US on incentives. Both are useful but both should be used in tandem.

Incentives in some places have been very helpful in driving investment into new technology and making them scalable and affordable. For example, German tax incentives kick started the solar industry and production tax credits in the US are linked to the amount of investment in renewables.

Germany was the first country to subsidize green technology on a large scale and was followed by China, whose subsidy of its solar industry drove down world prices 80 percent between 2008 and 2013—and caused the collapse of solar stocks in the US and Europe.

Two key issues with incentives are that they should be measurable and there should be reasonable certainty that they won’t be suddenly withdrawn. If large amounts of investment capital are required to get new tech off the ground, then the carpet cannot be pulled out from under the feet of those taking the risk. However, they should also be very carefully crafted and monitored to help ensure they are not just giveaways.

The planet will need massive global funding and much of this will have to come from private investment. While there are significant resources out there, they are not always getting to the right research projects or geographies – especially in developing countries. Reasons for this include political, regulatory and technology risk – but tax can also be a hinderance to cross-border investment. There is, therefore, a need for accepted, tax-neutral investment structures which allow funds to be pooled from a diverse body of investors in different locations so as to spread risk. Such structures should also provide certainty as far as possible – as certainty over the tax charge is often cited by investors as being more important than the actual rate.

The investment community may also require help. The concern over greenwashing has grown as more investments are channeled into climate-friendly funds, giving rise to a burgeoning market for ratings on how different companies deal with ESG challenges.

It is good news that a global securities watchdog, the IOSCO, plans to publish its first regulatory guidance for raters of corporate environmental, social, and governance (ESG) performance in July 2022 to help stem growing concern among asset managers about overstated green credentials. The playing field should be level, fair and understood.

The other side of the coin is tax as a charge. That’s partly to help internalize the cost of pollution from businesses and organizations which otherwise is passed on to society. But setting a carbon price is also important in creating a price signal to give investors the confidence to bet on cleaner technology.

The EU is leading the way as regards to pricing – with the Fit for 55 package and desire to reduce emissions by 55% by 2030. The EU’s pricing tool is the Emissions Trading System (ETS) and it is now looking at reducing the cap on the amount of CO2 which companies within the regime can emit, phasing out free allowances over 10 years and also extending the ETS to new sectors – like maritime, road transport and buildings. All these measures will drive up the carbon price.

However other countries use different measures such as carbon taxes – there will be those who favor cap and trade and those who favor a carbon tax. Whatever mechanism is used, there is the need to recognize the risk of a high carbon price being regressive as it will inevitably be passed on to consumers. This is not always the case. Some studies have shown carbon taxes can be slightly progressive where they fall on rich members of society who consume more. However, often the impact is felt disproportionately by poorer members of society, especially if the tax falls on heating fuels, housing, and transport. Therefore, it may be necessary for governments to consider recycling revenues to counteract these effects.

Tax reform in this area is tricky. The French president Emmanuel Macron sought to implement high fuel taxes in France specifically to target carbon emissions— raising petrol and diesel tax. But this followed other reforms reducing wealth taxes for the rich. This resulted in violent riots throughout Paris. His then prime minister Édouard Philippe announced that the government would bow to the protesters and that the planned diesel-fuel tax hikes would be suspended proclaiming that “No tax deserves to endanger the unity of the nation.”1

It is unity that must be striven for. Different countries are at different stages of the journey and use different tools – hence the concerns about carbon leakage, which occurs when there is an increase in greenhouse gas emissions in one country as a result of production or sourcing moving out of a second country with a stricter climate policy. To address carbon leakage the EU is proposing a Carbon Border Adjustment Mechanism (CBAM) which will be a charge on imports of iron, steel, aluminum, fertilizer, cement and electricity based on the price of EU Emission Trading System (ETS) emission allowances.

CBAMs do raise concerns about protectionism and a negative impact on world trade and World Trade Organisation (WTO) issues. They can also impact least developed countries substantially: such countries may not produce significant emissions overall but be very reliant on an industry which would be covered. In the KPMG/Jericho roundtables it was generally agreed that it would be better if there was a global carbon price rather than CBAM. Nationalism and protection of a nation’s interests will be hard to resist. The better approach is cooperation where it’s recognized that there may be legitimate reasons for countries to move at different speeds. Mathias Cormann, the new OECD Secretary General, has in fact recently suggested it might be possible to bring countries together along the lines of the Inclusive Framework – developed from the Base Erosion and Profit Shifting project – to agree on global carbon pricing. A hope that COP26 can deliver.

While the politics of taxing carbon are difficult enough at a local level, global political differences and rivalries are another hurdle to agreeing on any plan to reduce carbon emissions. Our planet is divided into 195 countries, but they share a single atmosphere. That atmosphere is indifferent to where emissions come from, as the impact on climate is the same. Meanwhile, no country or state wants to hurt its economic competitiveness. Such is the difficulty and complexity of the issues to be discussed in Glasgow in November and beyond.

The KPMG Global Responsible Tax Programme, run in conjunction with Jericho and the global community of stakeholders will continue to work through these issues to test just how far tax can go to help save the planet. 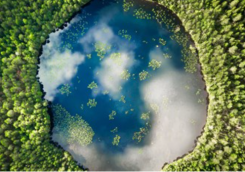