The Suffolk Coast and Heaths Area of Outstanding Natural Beauty and its rural hinterland has stealthily and unthinkingly been re-designated as an “energy coast” to promote the development of eight major onshore energy projects (to support offshore power generation) and two new nuclear reactors at Sizewell C.

This scale of industrialisation in designated sites and rural landscapes is unprecedented within the UK. It will irrevocably alter the character of the area with a detrimental effect on its environment and visitor led economy for generations. The international developers of these projects justify much of the environmental damage and damage to the existing economy by the local economic benefits of these projects. However, the long term economic benefits are insignificant, particularly when compared to the multibillion-pound scale of the investment.

“Based on past projects the overwhelming majority of that investment will not be spent locally. Indeed a large proportion will not even be spent within the UK.”

Based on past projects the overwhelming majority of that investment will not be spent locally. Indeed a large proportion will not even be spent within the UK. This is the reality compared to the “spin” of the developers, which disappointingly local politicians are far too ready to accept.

An historic example is Sizewell B nuclear power station which started construction in 1988 and operation in 1995. No doubt local economic benefits were heavily trumpeted particularly for the nearby local town of Leiston. However, as a number of commentators have pointed out, if this nuclear development was to be so advantageous for the local economy why has not Leiston, which bravely struggles along, become an epicentre of a thriving and dynamic energy led economy?

A more recent example is the Scottish Power (owned by the Spanish energy giant Iberdrola) development of the East Anglian One wind farm with its substantial onshore infrastructure connecting the power generated offshore to the National Grid. This was a £2.5 billion project. But how much of that money was invested in East Suffolk? The developers admit that the onshore infrastructure creates no long-term employment and precious little during construction.

So what about the offshore development, the high-value big-ticket items the turbines? Scottish Power granted contracts worth hundreds of millions of pounds to a company in the United Arab Emirates, a country dependent on low wage migrant labour with questionable employment practices, to build the jacket foundations for EA1 turbines. Meanwhile, the upper part of the turbines are provided by Siemens, the German engineering company.

So what does Suffolk receive? Supposedly some jobs and investment in Lowestoft. But what are the jobs and investment which are loudly trumpeted by the developers and cravenly accepted by local politicians? Scottish Power has built a small maintenance facility in Lowestoft which will support less than 100 jobs. This is part of an overall £25 million investment in Lowestoft. This is merely 1% of the overall investment in EA1. Further that investment is for a number of wind farms so as a percentage of the overall investments it is even less than 1%. So what about the jobs?. They are of course welcome but they are maintenance jobs and guess what, autonomous motherships and robot repair teams for offshore wind farms are on their way.

So how many of these jobs will remain after ever-increasing amounts of automation? Aside from Scottish Power, Associated British Ports has invested £4.5 million in the Port of Lowestoft to support offshore wind farms. These figures are not impressive in themselves but are minuscule when compared to the multi-billion-pound investments being made much of which remember goes overseas let alone to the UK.

The level of desperation of the developers’ PR teams for good economic news is that they even publicise a tiny £250,000 investment in new refuelling facilities at Lowestoft.  Even better a Scottish based provider of employee welfare facilities, otherwise known as mobile toilets, is to open a Norwich branch to support offshore wind projects. No puns please…

Enough of the negativity. What is needed is true leadership and a vision of a meaningful long term legacy for the local economy.  A legacy which will offset the environmental and economic damage caused by these energy projects onshore. A legacy which involves the investment of hundreds of millions of pounds. A legacy which will provide long-term, high value, high skilled jobs for generations to come. And when it comes to long term remember wind power will be generated from the North Sea not just for decades but for centuries.

“What is needed is true leadership and a vision of a meaningful long term legacy for the local economy. A legacy which will offset the environmental and economic damage caused by these energy projects onshore.”

So what might such a legacy look like? A legacy which even local residents, despite their vociferous opposition to the onshore developments, would have to concede was meaningful. A possible example is in the City of Hull where Siemens the turbine makers have invested over £300 million in a state of the art turbine blade manufacturing and assembly facility which will provide 1000 skilled jobs. Imagine the impact of an investment like that in the town of Lowestoft particularly if it included an extended local supply chain, state of the art R&D facilities and the potential to make and supply high technology and high-value components not just for the North Sea or the UK, but the World. That would be a meaningful long-term economic legacy. It is time for our MPs and local politicians, the Local Enterprise Partnership and Chambers of Commerce to stand up and demand investment worth hundreds and millions of pounds to create truly long-term skilled jobs and not be satisfied with the scraps which the developers handout as if giving change to a homeless person in the street. 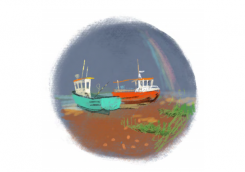