Easy fodder would call for a Mayday revolution to depose the monarchy, or despatch it, without fanfare, to a social housing project, somewhere in the nether regions of the United Kingdom. The Green Party advocated this, early in the Election campaign – a policy that momentarily turned my head Green.

My revolutionary cry, however, is – this time – not about monarchy. I ask instead that we dismember another redundant relic of a bygone age. It’s time to call time on Britain’s canals.

I tentatively suggested this to colleagues. I received passionate “hands off” responses – from one jogging alongside “glorious swans” and “sparkling waters” (really?) to another whose father had campaigned in the 1960s to keep the canals flowing – metaphorically at least, for the water is forever stagnant. Others harboured nostalgic memories: gambolling alongside wildflowers; managing tricky locks; grilling sausages on makeshift stoves; while avoiding that slightly odd man, inviting you into his pleasure boat.

Canals are the stuff that Britons oddly love to love. We wallow in an Edwardian faux nostalgia, hankering after a yesteryear that, let’s face it, was not really as pleasant as our imaginations believe;
a Britain that was always more Dick van Dyke than William Blake.

What’s my problem with canals? I understand their historic importance – less in building communities of travellers and more in the transportation system that provided channels for industrial revolution. Without canals, Britain would have sunk.

But the relevance today is less obvious. Sacrificing canals is for the greater good. An imaginative transformation of Britain’s waterways – especially those snaking through city centres – would see new parklands rise, complete with walking, jogging and cycling tracks and streams of genuinely sparkling water. Swans (freed from their royal enslavement) and wildlife would flourish in inspiring environments created by new generations of gardeners and landscapers. Freshly transplanted green lungs would revolutionise cities – well-lit, well-ventilated ribbons of beauty allowing families to walk safely, moving people healthily from one city district to the next and into green belts beyond.

Funding could be provided by sensible, public-value development along the fringes, simultaneously providing the energy and vibrancy of new communities and a much-needed offset for the corrosive affordable housing crisis.

When London Mayor, Ken Livingstone called for the demolition of Oxford Street, I sympathised then and still do today. Its narrow, dirty thoroughfare offers little more than a single-file of grungy buses. Buses should terminate at either end – allowing instead a pedestrian free-flow that encourages walking and a celebration of public realm. So it could be for canals, too. New water terminals can provide exciting gateways to modern cities. By transforming the canals, we could cleanse ourselves of a decrepit, litter-strewn urban stagnation that otherwise offers a powerful metaphor for the Britain of our times. 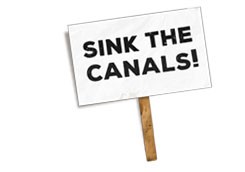