Washington DC is a dreary city. Even at the best of times, it looks and feels as romantic and inspiring as a filing cabinet: grey, angular, heavy and lifeless. On ordinary days, it is either too cold or too hot, or the air quality too poor to stay outside for long. The vast stone buildings often stand lifeless, tidy but inanimate.

But not today. Today is the first time I have ever seen this city come to life. It bubbled with colour, alive with banners and balloons, hats, scarves and flags. On the jammed city metro, the trains heaved with people wearing pink knitted ‘pussy’ hats and carrying banners. The slogans covered everything: healthcare, guns, Muslim registers, immigration, abortion, equal rights, climate change, better education, sexual harassment, fair pay, civility, respect, bad hair, bad manners, homelessness, corruption, deceit. Bad-ass moms had come to DC to be heard and you could hear them as joyous shouts rippled across the vast concrete boulevards.

“This,” they chanted, “is what democracy looks like!” It looked young and old, able-bodied and in wheelchairs, Jewish, Muslim, British, French, Canadian, gay, heterosexual, transgender, nurses, scientists, letter carriers, lawyers. At first it was hard to see how many we were. The sound we made was immense but the flat hard city made it hard to see how far we stretched. After standing patiently for a long time, people started to move, eager to see where the end was. Was there an end to the colourful, inchoate but endlessly polite and calm crowd? We heard there were speeches but couldn’t hear them. We were told there were celebrities but we didn’t really care. What mattered was that preparations to celebrate Trump’s presidency were now being erased by thousands of wildly different people united by their passion for fairness, for joy and for hope.

Diane had come because her 90-year-old doctor had given her his air miles and asked her to march for him. His daughter had given her a bed for the weekend and at the airport, she bought a copy of the Constitution. The bookseller, she said, told her that everyone was doing that today. On the plane from San Francisco, both cabins were crowded with women, proudly sporting their pink knitted hats, making friends with strangers through common cause. John, a schoolteacher, came because he wanted to stand with women, to make sure we knew that Trump did not stand for him. A lawyer from Ohio told anyone that asked that her district alone had voted for Hillary; she seemed eager to reclaim her state’s reputation. So many parents and children. So many whose eyes and faces seemed to recall the 60s with quizzical sadness: really, here, again? We thought this was done. But it is not done.

Away from the euphoria and kindness of the crowd – their jubilant support when they learned I had come from England – I wondered how long this spirit can keep us going, pushing, arguing, insisting on a better government. What gave me hope was the immense sense of unity, something the women’s movement had so sorely lacked in the past. If we can join forces with all races and classes and identities, if we can truly galvanise around the deepest meaning of equality and the finest forms of hope, then perhaps at very long last the women’s movement will gain the impetus, focus and joy it has always needed. Perhaps we can finally make America think again. And think better.

So many people turned up, a formal march became impossible: everywhere you looked there were colourful protesters. When I finally wandered away and the crowds thinned, I passed people leaving their hotels in more formal attire: dark cashmere or mink coats. These were the Trump celebrants who had come to rejoice, now overwhelmed by a livelier, brighter crowd. Colour in itself became an identifier: a pink scarf, pink shoes provoked smiles between strangers. Where there was lack of colour, the atmosphere was more hostile. Outside of Trump’s hotel, its lavish entrance spoiled with police cars and barricades, a marcher complained that taxpayers’ money should be used to protect the President’s business and I wondered who would wish to stay there. Near my own more modest (and friendly) hotel, souvenir sellers were packing away their Make America Great Again inventory, ceding to the sellers of Love Trumps Hate buttons and pink pussy hats. Gradually, the march receded. By K Street – the epicentre of corporate lobbyists – it was gone. And I wondered how many lawyers were now changing the guard, the Obama loyalists no longer with clout, friends of the new regime moving in. Colour seemed to drain from the city as its grey concrete office buildings and brown grass waited for the furore of protest to pass and the bureaucracy of power struggles to resume.

But the next morning, women caught each other’s eyes and smiled. We could see each other, in a way we never had before. We had seen how many of us there were, how many allies we had. We saw that we weren’t alone and that we stand for the majority of people in the United States who believe in equality. It is a central, foundational belief in this country and it remains galvanising, inspiring and uniting.

Whether it has such huge rhetorical pull in the UK, I am not sure. Do we believe everyone is equal, really? Is that even possible in a monarchy? Mrs. Thatcher famously believed that “nations depend for their health – economically, culturally and psychologically – upon the achievement of a comparatively small number of talented and determined people.” The natural corollary of this is that it is only the small number we need concern ourselves with. She never seemed to ask what became of everyone else. Boris Johnson is no different, in his belief that some ‘cornflakes’ naturally rise to the top of the packet – and the rest don’t really count. We persist in dividing people into goats and sheep, the talented and the rest, the high potentials and the no potentials. It is, as the Stanford psychologist Carol Dweck told me last week, so much easier that way; we like it because it allows us to be lazy. We do not need to think about those who do not share our gifts, our opportunities, our luck. But it also wastes everyone’s opportunity for growth, economical, cultural, psychological – and political. We need everyone because everyone matters.

I have always argued that the failure of the women’s movement to achieve true recognition – equal pay, equal opportunity, equal access to being taken seriously, free from abuse and marginalisation – has stemmed from our inability or unwillingness to connect with other, equally marginalised and trivialised groups: the disabled, minorities and immigrants. I stopped going to International Women’s Day events that were full of women talking to women about women. And I noted that the few companies that had made any headway with diversity had overcome those divisions. If I take one strong belief away from this march, it is that women will not succeed alone. No one ever, really succeeds alone. The true measure of a society isn’t the good fortune of the few but the everyday experiences of the many. If women can unite around that, if we can find common cause with others, nothing can stop us. 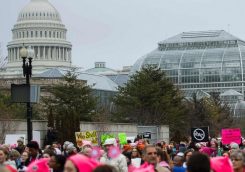