The NHS, “Our NHS”, has never been short of purposeful slogans. The Patient First And Always or its close variant, The Patient: Front and Centre, are both popular and have been adopted as a mission statement by many Trusts across the country.

But how often this patient-centric approach actually occurs in practice down on the frontline is open to question. The COVID-19 pandemic has stretched some elements of the UK health system near to limits. If you had the virus and became seriously ill, you were almost certainly front and centre, even appearing on TV news programmes in an ICU with your face pixelated.

But if you were already suffering from an existing condition or were in the process of being referred for investigation for something potentially sinister, then the NHS closed its doors to you for a number of months after lockdown. It was otherwise engaged.

When the enquiry into the nation’s response to the pandemic appears in however many years time, the question how a £140 billion a year enterprise with scores of strategic planners both at the Department of Health and in the regions didn’t have more than very basic levels of Personal Protective Equipment must be answered.

The latest Jericho roundtable discussion, convened on behalf of Assura PLC, looked very precisely beyond COVID. Assura has proper skin in the game as a UK-based property business which designs, builds, invests in and manages General Practitioner (‘GP’) and Primary Care centres in Britain.

As Jonathan Murphy, Assura CEO, noted in his opening remarks: “Given COVID’s particular ramifications for public spaces, public health, mental health, isolation and care most locally, we want to understand what patients want to see now? If we had a blank slate for local primary care places, what would patients draw on it after the experiences of this year so far? What services and support would that offer, and where in their community would it be (both physically and virtually)? What future for tele-medicine? How can we build/ sustain a system that supports, not strangles, innovation?

“This conversation provides us all with a space to enjoy an honest and open exchange of insights, views and ideas – to support fresh thinking and possibly better policy- and decision-making also.”

“Re-structuring” is a concept to put fear into the heart of any doctor, nurse or NHS middle manager. Big Idea re-structures have been attempted on a number of occasions during the last few decades with varying degrees of success. The theme of how you humanise what has, of necessity, become an industrial process complete with “just in time” levels of supplies working their way through the chain, was taken up by Margaret Heffernan, celebrated author and business leader. “I’ve been associated for many years with the NHS, as a customer and advisor,” she said. “It’s an organisation full of paradox and contradiction. COVID, in some respects, was a liberating moment. There was absolute clarity that the patient and not money came first. Silos, hierarchies, bureaucracy were abandoned. Permission did not have to be sought to try new collaborations. You could say practitioners were free to be human, even professional. Gameable metrics and bad targets were abandoned.

“The NHS may have issues. But the US system is a catastrophe. But there are beacons of light in the US – not least at the Dell Medical Centre in Austin, Texas. Dell is a unique experiment showing that healthcare can get better — in a city where the need to get much better is overwhelming. Critically, the Dell experiment is focused on interpersonal medicine: the power of personal relationship between physician, nurse and patient to promote healing.”

We next heard from Brendan Martin, the Managing Director of Buurtzorg Britain & Ireland. Jos De Blok founded his leaderless organisation Buurtzorg (meaning “neighbourhood care”) twelve years back in the Netherlands. It is now a not-for-profit network of over 14,000 nurses and care workers, organised into smaller autonomous teams of up to 12 members who work together to meet their patients’ needs. There are no bosses or leaders. Within each neighbourhood, the independent teams of nurses are responsible for the complete care delivery to their 40-60 patients. These nurse teams have complete autonomy to carry out their work as they see fit – no targets, no allocated time slots per patient, no tick-box care. The twelve are wholly responsible for the well-being of their patients and they share patient solutions, results and experiences with one another. A specialized digital platform facilitates this communication, linking not only nurses within a team but also to other nurses in the wider network. A ground rule, one of a few in the framework within which the teams have autonomy, is that nurses must spend 61% of their time in direct contact with the people they support. It has scored maximum points in the most recent inspection by the Dutch equivalent of the Care Quality Commission (CQC).

Brendan explained that so far Buurtzorg has supported 20-30 organisations in the UK to learn about the model and change the way they provide care at home. There has been enthusiastic support from the secretary of state for Health downwards, but it’s at the beginning of its journey in this country.

“We like to think we enable and support rather than drive and require. But the question remains whether, when it comes to care, central government with let go of the process, stop micro-managing and allow management of vital care to take place where it is actually delivered.”

Laura Lee of Maggie’s cancer centres was concerned about events during the last six months of pandemic. “We have 24 centres across the UK and it’s true to say that CoVID led to a sense of abandonment. Cancer centres were working at 50% capacity. It will take between three and ten years to return to where we were before. Zoom may have worked well during the crisis – and we know doctors love it – but it simply isn’t good enough for many consultations.”

“I think there is a real opportunity for the new NHS built estate – whether acute hospital builds or GP practices etc – to serve the community and their health and wellbeing and not be factories to process the sick.”

Before the pandemic, 5 per cent of GPs offered remote consultations; now 88 per cent do. Any good and experienced doctor will tell you that it is not only a list of symptoms they need to make a diagnosis but an impression of their patient: their demeanour, their confidence to speak of awkward things face-to-face, not to mention the ability to examine them in the flesh. It’s the unspoken that can often speak volumes.

“Personal and human contact is vital in our area of care,” continued Laura. “Having said that we know which aspects require attention. Buildings do matter very much in healthcare. They have a strong influence on both behaviour and outcomes. The traditions are very much about control rather than client experience – it’s akin to a factory system.”

This “factory system” was noted by several RT participants. Waiting rooms which urge patients to wait their turn as part of an “in and out fast” process may be functionally efficient but have questionable outcomes. Metaphors for dealing with patients were too often derived from engineering rather than, for example, gardening with its emphasis on cultivation and nurturing.

Several clear themes and concerns emerged in the discussion that followed.

The group agreed that all issues were worthy of further investigation

Ed Wallis, Head of Policy and Public Affairs at Locality noted: “We’ve talked a lot in the past about how local communities act as important connecting cogs in the system. We’ve seen that strengthened in the crisis. Particularly, their role in developing informal support and connecting with more formal public sector responses.

“A few things have driven that and a noticeable cultural change is one of them. Because a community response was often up and running before formal response, it changed the power dynamics.  And two procedural changes and flexibility around procurement has sped things up. Brendan’s challenge is therefore clear – will government enable and support rather than drive and require?”

This was taken up by Bev Fitzsimons of the Point of Care Foundation. “Centralised control almost takes the humanity out of the local solution. Solutions need to be local and practical. But to achieve this people need to feel free and enabled to put them into practice. I have a huge amount of trust in people in local systems to get on collaboratively with communities, but they’re fearful because they don’t know how to do it well and are worried because they’ve seen it be done so badly by formal systems in the past.”

“We must invest in and support social infrastructure in the same way we do physical infrastructure. We’ve seen during the crisis the rapid and effective way established local networks, organisations and community assets have responded. We think this has shown we don’t need to design new institutions to solve the complex social, economic and environmental problems we face. Instead, policymakers need to invest in and nurture an old idea whose time is now: the power of community.”

Sharon Grant, chair of Public Voice CiC, remained cautious: “It’s fascinating to hear about the models of care Brendan and Margaret are describing  – they seem like a paradise. But we’re such a long way from achieving them. There isn’t the leadership in health or social care to arrive at even starting to discuss these models, in my opinion. The current direction of travel at the moment is the negation of consultation, engagement and participation. We need to have full involvement of communities to get to these models but we have to recognise the capacity that emerged during COVID is limited. Community/ voluntary sector is exhausted in my patch. People pulled out all the stops but they will be going back to work soon. There isn’t a level of sustainability. There has been a decimation of local services over such a long time now.”

David Grayson, the chair of Carers UK, agreed: “A good number in my sector are now at the end of their tether,” he warned. Certainly one area that COVID has made even clearer is a sometimes desperate lack of continuity between NHS and social care.

Margaret Heffernan acknowledged it would be no easy haul: “Social problems require social processes. This won’t be solved in one fell swoop out of Whitehall. The notion you solve a problem by starting from scratch is naive. Many people in the NHS suffer from learned helplessness. They’ve been beaten to a pulp. It will be solved on the ground. People learning to do things better and proliferating those. There is an appetite in the NHS to do this. But it’s been such a political football for so long…..”

To conclude Jonathan Murphy remarked: “We started out thinking where is the patient in all this – building on Brendan’s comments enabling communities to come together to provide the services they need? If we can build community health and wellness centres that put the patient in charge and place them at the start we will make massive progress. This is an inspirational objective for us. It won’t be easy but it’s worth shooting for.“

Public Health…. Where is the Patient? 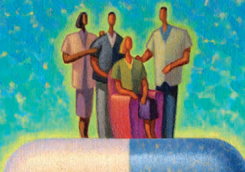