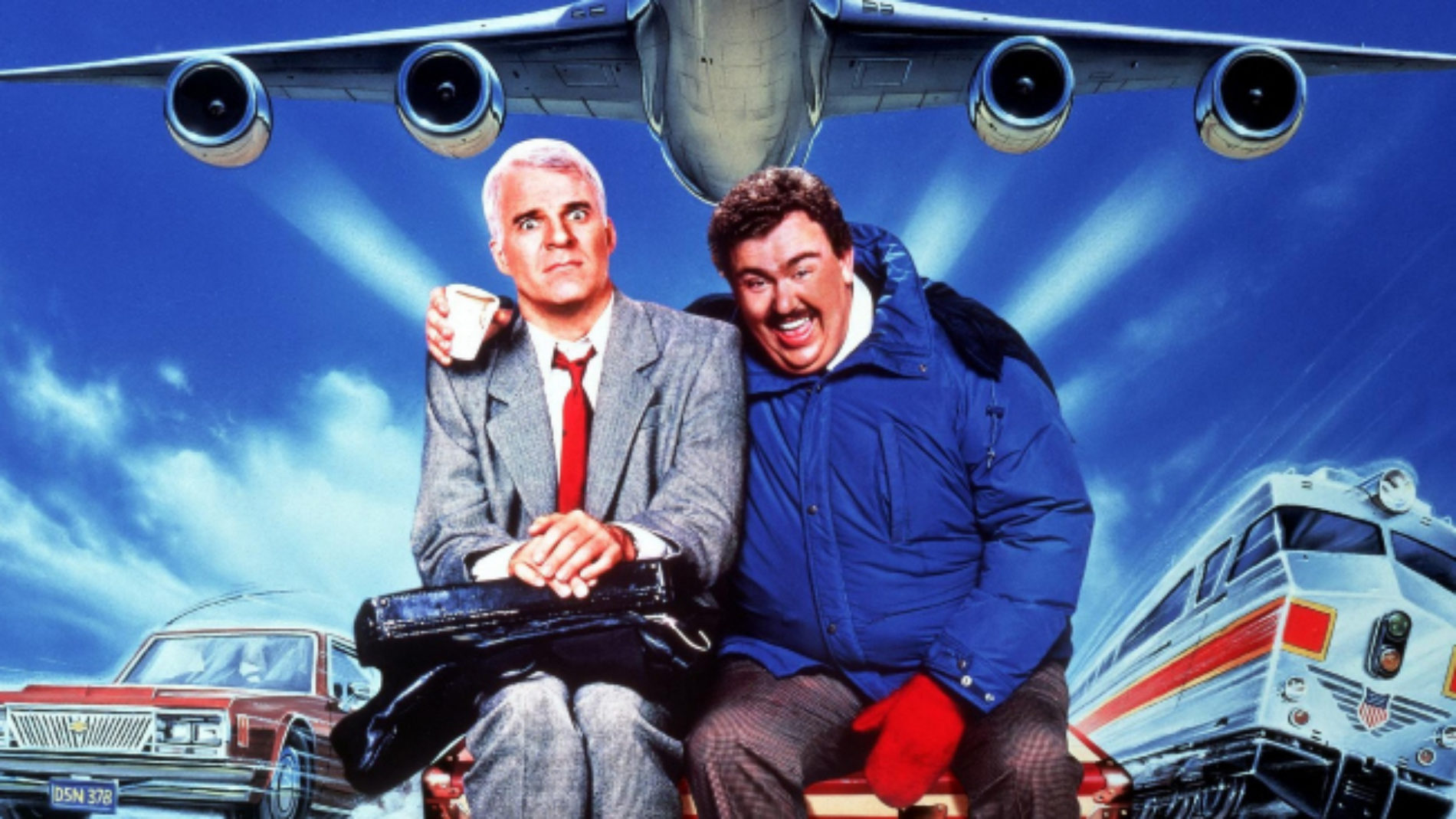 The celebrated 1987 film Planes, Trains and Automobiles starring Steve Martin and John Candy did not portray the transport industry in a flattering light. As ad man Martin struggles to get home from New York to Chicago and his family for Thanksgiving everything that could go wrong goes wrong, starting when a blizzard diverts him to Wichita, Kansas. The movie is about the association between travel and stress. The two go together because, unless we trust our own two feet, our progress whether on a train, plane, automobile (or bus) is largely out of our control. We are at the mercy of other forces. When the primeval cortisol kicks in on an over-filled tube train you can hardly fight and you can rarely flee.

The reverse can also apply, however. The correct transport choice can be relaxing – a stress avoider. The old 1988 British Rail ad invited us to ‘let the train take the strain.’ When a train journey goes well and one is speeding through the sunlit countryside – while drivers swelter in motorway traffic jams or 150-metre long airport security queues nothing could be better.

This stress has worked its way from the individual to the collective – across to politics, policy and public opinion. Around so many transport issues there is much emotional heat. (Often at the expense of light.) Uber, HS2, revised train timetables, a third runway at Heathrow, the re-nationalisation of the East Coast mainline, emissions from internal combustion engines. All are now hotly debated.

Public for a reason

We’re all in it together – public transport is a public good. And there are few who don’t hold strong opinions about how to put things right. Maybe this is no bad thing – at least it shows the public cares and is committed to our collective futures. Indifference to our infrastructure would be worse. As an Economist editorial put it recently: ‘Like it or not – and many people do not – mass public transport does some things very well. It provides a service for people who are too old, too young, too poor, too fearful or too drunk to drive or ride a bike. Trains and subways cause less pollution than cars and move people at far higher densities. The danger is that public transport could become a rump service, ever less popular and ever less good partly because of its unpopularity.’ 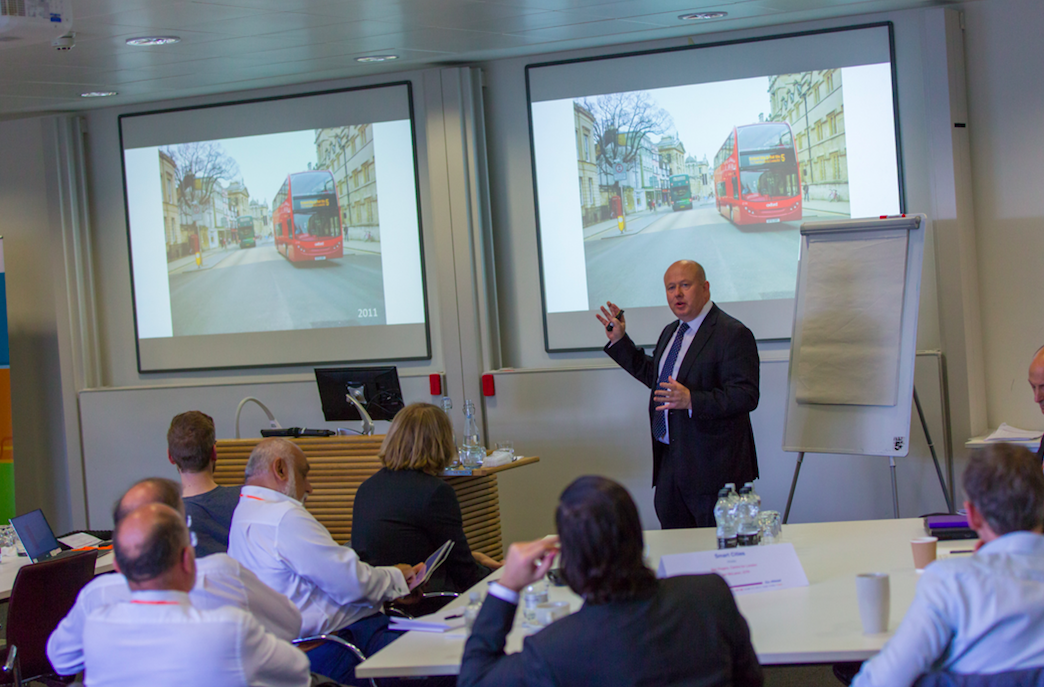 Cllr Ian Hudspeth presents a vision – and the logistics – for the pioneering ‘Smart Oxford’ initiative.

And the fact that public transport systems are declining in many wealthy, developed cities is concerning. In New York bus trips in the first four months of this year were 7.6% lower than expected by the transport agency. In London bus journeys are down by 5% since 2014-15 and now tube passengers numbers are dropping, despite annual population growth in the capital of about 1%.

What’s to be done?

The Institute for Government wrote of our current problems in its report on infrastructure: ‘A key reason (for poor decision-making) is the difficulty of striking an appropriate balance between public engagement, expert advice and political leadership. Deciding where to invest limited state resources and which objectives to pursue is inherently political. Yet, infrastructure policy is more likely to be effective if it is evidence-based, long-term and stable.’

So, as part of the ongoing ‘Moving The City For Good’ programme developed by Go-Ahead Group and Jericho Chambers an Open Table event of almost sixty delegates was convened on 18 June in Oxford. The aim was to address key challenges – regional, local and national – that face the transport sector in the UK. Fields represented included planning, politics, tech, skills, economics, airport owners, entrepreneurs, car-sharing, bus and train operators. Contributors came from Plymouth, Southampton, Brighton, Norfolk, Cambridge, Bristol and Durham. 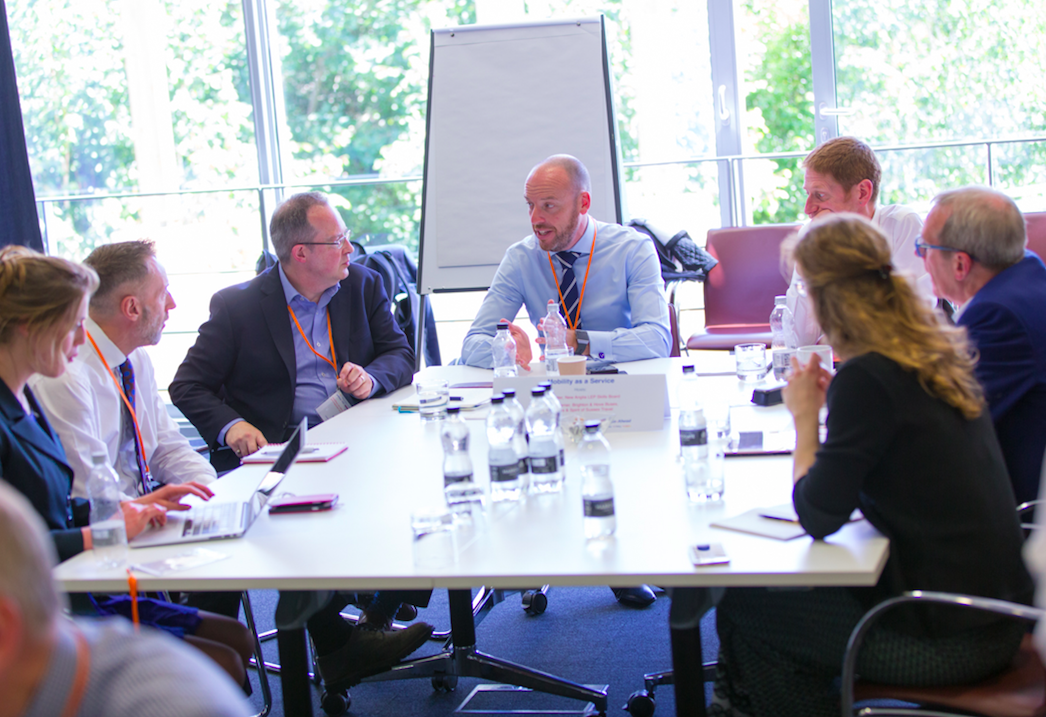 A group of participants shine the spotlight on Mobility as a Service and how this can help connect rural communities.

The choice of Oxford was significant. The city and the county council are currently involved in the Smart Oxford programme, which seeks to find innovative ways to meet hugely increased demand for transport and growing problems of city congestion and pollution. Some of the potential solutions are radical: by 2020 there will a non-electric car ban in a section of central Oxford which we see the exclusion of petrol and diesel vehicles. This is being hailed as the world’s first zero-emissions zone. (Incidentally, if you wish to park a car in 2018 in central Oxford on a Saturday for more than eight hours it will cost you £35.) One of the opening presentations, explaining the Oxford vision, was from Ian Hudspeth, the leader of Oxfordshire County Council. His podcast interview is below.

Hudspeth was followed by Professor Sir Nigel Shadbolt, Principal of Jesus College, Oxford Chair of the Open Data Institute and author of the The Digital Ape: How to live (in peace) with smart machines. In 2009 Sir Nigel was appointed, along with Sir Tim Berners-Lee, as Information Advisor to the UK Government which led to the release of many thousands of public sector data sets as open data. Many have been used to improve citizens’ travel across cities and the countryside.

Lacking in neither conviction nor passion, Shadbolt is nevertheless a firm believer in making ‘well-informed decisions’ using proper, sound data. He recounted the extraordinary fact that when government went about discovering precisely what sat in the national inventory, they found that 17,000 bus stops were not where they thought they were. He regretted the fact that when he is in London his Citymapper app works perfectly but a lack of available data means he can’t use it when he returns to Oxford. His podcast interview with views on privacy, Facebook and much else is available to listen to below.

David Brown, the CEO of Go-Ahead Group was up next. Brown has worked in buses since joining London Transport as a graduate trainee. As he said: ‘Buses may not be as sexy and seductive as £15 billion Crossrail projects but the bus network remains the backbone of our national transport infrastructure. But the UK bus network has shrunk to its smallest size in 20 years. We’ve lost 134 million miles of bus routes in the last four years alone. These numbers put Dr Beeching’s cuts way back in the 60s into the shade.”

David noted that while Go-Ahead operates one of the largest electric bus fleets in Europe with 60 vehicles, over 9,000 electric buses are being added each month in China. Go-Ahead is also setting up the UK’s first bus ticket system using iBeacons, terminals that link to an app on a customer’s smartphone enabling them to be automatically charged the correct fare for their journey. And in Oxford a demand-responsive bus service has just begun giving people the ability to summon a minibus service to pick them up at the street corner of their choice. More on these themes is available below in a podcast of an interview with David Brown.

An interview with Cath Sermon, employment director from Business in the Community which includes some great insights into the issue of social inclusion is here. In it she discusses why transport, despite being the route into employment, is often the forgotten glue for disadvantaged communities. She asks why should transport be an ‘afterthought in the macro-planning process?’ Why has cycling become such a middle class transport method? And do newly introduced car emission-related exclusion zones mitigate against those poorer members of the community who cannot afford more modern, less polluting vehicles?

A joint interview about Smart Cities and the future of transport between Richard de Cani, the Head of Planning for UKMEA at Arup and Jonathan Hampson, the General Manager for car sharing business ZipCar in the UK is here. Why is 95% of Zipcar’s business in the capital despite its borough structure making it ’a very difficult city in which to do business.’? They recall the London transport crisis of 25 years back which led to creation of integrated transport authority. What can mayoral systems achieve elsewhere in the UK? Is private ownership of cars now doomed? Neither thinks the current status quo is sustainable and both suspect that consolidation centres for freight within busy cities are more than likely in the not too distant future.

There has been much talk in recent years about the relationship between public and private in transport.

Several members of the Oxford symposium wondered whether ordinary travelling members of the public make distinctions between public and private transport. You can, after all, share in either sector. The future probably promises a tech-enabled system where individuals can move across cities for one payment using a combination of trains, taxis, electric scooters, bikes and buses as is their wish and depending on what’s the fastest, least expensive and comfortable. One thing is for sure – mass public transport is far from finished.

We’re all in it together – public transport is a public good. And there are few who don’t hold strong opinions about how to put things right.

Travelling behaviours are changing. Remote working, Uber, cheap car loans, shared bikes, and the internet are altering the world of work and how we travel to it. In the UK the numbers working exclusively from home grew from 2.9 million in 1998 to 4.2 million in 2014. And how many of us now know someone who works from home on at least one day per week? Likewise how many of who would have in the past made a trip to a retailer now buy online and receive the package at home or at work? (This squadron of largely empty Amazon delivery vans in cities causing its own congestion issues.) City dwellers are almost certain to pass on the tube if it’s virtually impossible to board one between 7 and 9 in the morning rush hour.

But cycling isn’t for everyone. There are horses and courses. One overheard observation from a Health and Wellbeing discussion group at Go-Ahead’s Oxford Symposium included the following – ‘It’s all very well drawing attention to the civilised use of bikes in Amsterdam or Copenhagen, but driving a bike in central London involves an appalling mix of psychosis and paranoia.” This might give the screenwriter of ‘Trains, Planes and Automobiles 2 – The return To Wichita” an idea for a new scene. Put Steve Martin on a Boris bike and make him negotiate Cycle Superhighway 2 during the morning rush hour in mid November.

The Oxford Symposium was convened by Go-Ahead Group. Go-Ahead is a leading international transport provider. The Group is responsible for more than a billion journeys each year in the UK and beyond, and is the largest operator of bus services in London. 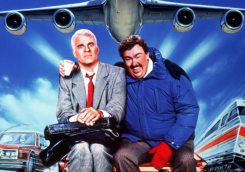