The challenge of decarbonisation is immense. While the case for Sizewell C is compelling, it cannot pass without scrutiny and accountability.

The UK has quite rightly committed to reaching Net Zero by 2050.  The clock is ticking, and we now need to put into practice those policies which are needed to secure this goal.  East Suffolk has a key role to play and it is important that we secure lasting benefits for local people, whilst protecting and enhancing those features which make East Suffolk such a special place.

The challenge of decarbonisation is immense

As we decarbonise our energy, transport and heating systems, there will be a dramatic increase in demand for electricity which should be met through a wide range of technologies, ranging from local community initiatives to those large schemes that will power our major cities.  This supply system will be underpinned by an alliance of big gigawatt nuclear and large-scale offshore wind.  The two complement each other well, with the former providing dependable base-load electricity to cover those periods when the wind is not blowing.

The Organisation for Economic Cooperation and Development, the UK’s Committee on Climate Change and the Energy Systems Catapult all conclude that we need nuclear to get to Net Zero, as it brings down those rising emissions that are fuelling climate change.

“It is important that we secure lasting benefits for local people, whilst protecting and enhancing those features which make East Suffolk such a special place.”

East Suffolk is strategically placed to play a pivotal and a lead role in the transition to a low carbon economy, both with the largest array of offshore wind farms in the world being developed off our coast and with EDF’s plans for Sizewell C that will generate electricity for over six million homes, whilst avoiding nine million tonnes of carbon emissions a year.

There is also the opportunity to produce hydrogen, when electricity is not needed by the Grid.  In a Net Zero future there is likely to be a need for a lot of hydrogen and low carbon heat for both industrial processors and heating buildings.

Suffolk thus has the opportunity to be the ‘All Energy Coast’, bringing significant benefits to the whole of the UK, ensuring that we control our own energy supply.  However, this must not be at a net cost to our area and we must ensure we harness the full benefits for local people and local businesses.

Suffolk: A County in Transition

While Suffolk as a whole is generally perceived as a reasonably prosperous county, there are local pockets of deprivation, including those in Lowestoft, where average income is 17% lower than in East Anglia as a whole.  This is largely attributable to the decline of traditional industries such as manufacturing and fishing which has taken place over the past 40 years, though the foundations are now being laid for an exciting future including the construction of the Energy Skills Centre at East Coast College; the redevelopment of Cefas’ offices and laboratories at Pakefield; and the opening of Scottish Power Renewables’ £25 Million Operations and Maintenance Base in the Hamilton Dock.

Further investment will take place in the next five years with the building of the Third Crossing over Lake Lothing, the construction of full flood defences and a £25 million investment in the town centre.  There are also exciting plans for the regeneration of the East Anglian fishing industry.

The transition to a low carbon economy presents a once in a lifetime opportunity to bring a lasting legacy to our area, not just in Lowestoft but across East Suffolk. It is important that we grasp this, but we must not do so at any cost. We must strive for lasting change.

“The transition to a low carbon economy presents a once in a lifetime opportunity to bring a lasting legacy to our area, not just in Lowestoft but across East Suffolk. It is important that we grasp this, but we must not do so at any cost. We must strive for lasting change.”

We must seize the opportunity to broaden the skills base in the area, so that people can work on the construction of Sizewell C, can work there once it has been commissioned and can also transfer their skills to other sectors.

East Coast College are well placed to ensure that we provide this enduring legacy of skills, which in due course will make the area an attractive location in which to set up and grow businesses.

It is important to have in mind that these opportunities reach out beyond the immediate Sizewell area and that people will be drawn to work there from a wide catchment area that is likely to extend to a 90-minute commute.

We must ensure that as many people as possible in this wider area have the opportunity to work on a project that will last for 9-12 years and where it is estimated that at the peak of construction will have a workforce of approximately 7,900 people. This will help give the local economy a boost as we emerge from the devastating impact of Covid-19.

These opportunities must not come at the expense of the environment. There will be significant challenges during construction, but the necessary mitigating measures must be put in place and the local countryside, which is so important from a tourism perspective, must remain “open for business”.

We must protect the environment and the open countryside that surrounds our towns and villages, linking up and promoting the attractive and unique landscapes along the Suffolk Coast and then running West from Lowestoft to Beccles and Bungay along the Suffolk Broads.

We must also ensure that we upgrade our transport network, in particular the East Suffolk Railway Line, which connects Lowestoft and Ipswich and which is an important community and economic asset, though at an average speed of 34mph is one of the slowest lines in the UK.

In the short term, along with barge transfer, the railway can play an important role in reducing HGV traffic on the roads to the construction site. In the longer term, if the journey time can be reduced, it can help get traffic off the roads and can improve accessibility for businesses, including those in the leisure and tourism industry.

“Tackling climate change and transforming the way in which we generate electricity means that Suffolk has the opportunity to play a leading role on the national stage. This does not come without difficulties, which in some ways are intimidating and at times appear insurmountable.”

Tackling climate change and transforming the way in which we generate electricity means that Suffolk has the opportunity to play a leading role on the national stage. This does not come without difficulties, which in some ways are intimidating and at times appear insurmountable. But if we rise to the challenge, we can bring significant benefits to the area and great opportunities for local people. 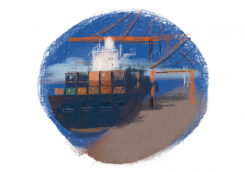