I remember returning to my boarding school in the early ‘70s. The summer holidays didn’t end when we left home in my father’s Hillman. There was a tangible moment, usually during the afternoon of the September day before, when I switched from family and free to school survivor. I knew the moment because I started to throw things into my hand-me-down trunk – collars and studs, draw-string rugby shorts, pretentious books, an aftershave bottle filled with Dad’s whisky.

I usually returned early on the day itself, partly because I wanted to get ahead of the game with study furniture and dormitory allocation, switching the labelling for a corner bed if necessary before the train boys arrived. I bade farewell to the pretty girl from the next village and left her to the attentions of the handsome day-boy at the local state school.

If the holidays finished when I started filling the trunk, term started when the Hillman took a turn on the old A361 and the rugby posts appeared by the road. By that stage I’d hardened from the sensitive and likeable youngster of August to the whiplash-tongued cynic who would make it through another tour of duty, like a return to barracks. My fingers closed around packets of No. 6 cigarettes in my coat pocket. I didn’t smoke, but they would be the term’s penitentiary trading currency.

I wasn’t unhappy at school. Far from it, I prospered. We were the generation modelled on Lindsay Anderson’s movie if: I wanted to be Malcolm McDowell, delivering his speech before he’s beaten by the Head of House: “The thing I hate about you Rowntree is the way you give Coca-Cola to your scum and your best teddy bear to Oxfam, and expect us to lick your frigid fingers for the rest of your frigid life.” I even joined the shooting team.

We were the generation that went to school in ‘68, when the student barricades went up in Paris. We left in ‘73, having assisted much of the punitive system to destroy itself, full of hope and trust. But it was always “Back to School”. We weren’t just going back to the institution; we were going back in time to a command-and-control structure that clung desperately to the old ways, a folk memory of Empire, white supremacy and the effortless superiority of our class.

I was nearly expelled in my last hour at school for bunking off Speech Day – though I hadn’t mounted a machine gun on the roof. A couple of hours after that I bade farewell to a great friend of the previous five years who I knew I’d never see again, with a perfunctory Mockney “See yer” before he cycled away without looking back. There was to be no looking back after that, no going back, no Back to School.

The past 40 years or so have delivered a different perspective on that time. We always went Back to School – backwards in time – but we never left it as we found it. We changed it from within – we quietly abolished the fagging system without telling the staff, quit “New Boys’ Tests” (little more than ritual humiliations) and beatings (ditto), we embraced the local community and broke the unspoken homo-erotic agenda by talking to girls; the school eventually caught up with us and accepted them as pupils.

And, with one or two lapses, the best of this generation has never stopped doing that. We thought we’d left school, but the truth is that we were never going Back to School, we were going On to School, moving things on, refreshing and reforming, always learning.

The lessons for now are apparent. The years we’re in feel very much like the period between the summers of ‘68 and ‘73. There is something in the air. But, just as then, the old certainties are still clung onto by those afraid of what they’re losing. In politics and business – particularly in financial services – the sense of entitlement is palpable. Don’t change, we’re told, or there will be chaos. Chaos being defined as the lack of triple-digit property inflation, an alternative to stewardship of a “middle-ground” in politics that is nothing of the sort, and a challenge to the idea that everyone has to profit financially from any enterprise for it to work.

But Jeremy Corbyn has lit a fuse on British politics. There is a hunger for authenticity, and not always comfortably so, as we witness the rise of Trump in the US and Le Pen junior in France. The tired old control of Western populations cannot stand up to the pressures of migration exacerbated by Western foreign policy. Economies can’t prosper any more on the principle of an elite swiping the top off an economy, like a barman swiping the head off a lager.

As in the early ‘70s, many more people get this than we might expect. It’s why Corbyn is winning and Tony Blair looks like a public-school housemaster ordering the boys (and girls now) to turn their music down and get back to their Latin prep. There is once again great hope. Yes, it’s dangerous, but then it always was. And look where we are now – immeasurably better off in every way than we were when we were warned by the defenders of the old ways in the ‘60s and ‘70s that we risked wrecking everything with our anti-establishment ways. We’re always back at school, learning, changing. And the greatest lesson is that there are no certainties. But we have faith in the future. Let’s go there. No more frigid fingers.
No more frigid lives. 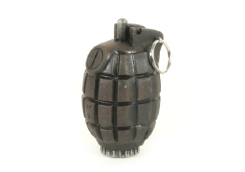