The digital revolution sweeping through journalism is generally reckoned to be driven by its technology exclusively, led by visionaries who are democratising the trade by carrying it out of our old temples on tablets (and mobiles) to be given to the people. Meanwhile, in the alternative meaning of the word, there are plenty who reckon that newspapers are indeed revolting. From the celebrity-driven Hacked Off campaign for greater protection and privacy, to politicians from right or left who attack their journalistic inquisitors, to straightforward members of the public who believe that the practices of the press are base and disreputable. Witness the nadir of journalism in the phone-hacking scandal.

And from newspaper editors doing the bidding of their proprietors (or simply drunk on their own political doctrine), to celebrity broadcast interviewers parading their own skills in performative arts over any illustrative answers from their interviewees, journalists have formed their own rogue state, arrogant in the exercise of their power and contemptuous of any challenge to it. So the argument goes.

It may be that what journalism needs is not so much a revolution — or, rather, the revolution is one that is confined to technology in the channels of distribution — so much as a reformation. In this model, journalism’s original mission has degenerated into self-interest, preservation of its status quo and the self-indulgence of its senior figures and owners.

The analogy with the Reformation, whose 500th anniversary we’re commemorating this month, isn’t grandiose. Today’s media empires arguably sell indulgences to over-exposed celebrities and appoint editors who will simply perform the will of their patrons. It’s a form of latterday simony: The selling of privileged ecclesiastical positions replaced with the Faustian pact between owner and editor, through which the price of preferment is the journalist’s journalistic soul.

“Journalism has a place — and a vital one at that — in the prevailing polity in which it operates. It can seek to re-establish its authenticity — not least so that it burns with pride again in the hearts and minds of those who practice it.”

The comparison with the Reformation can be over-stretched. Today’s British journalism has no equivalence with a “break with Rome”. There is no centralised, corrupt authority — and no figure, happily, claiming infallibility through divinely appointed apostolic succession. Not yet, anyway. And the bottom line is that journalism isn’t a religion — heroic members of the profession have died in its cause, but not (so far as we know) fighting other journalists, whom they believe to be working for heretical titles, or for the devil. To be clear: They may think some of their competitor journalists work for the devil, but they remain — at the time of writing — unlikely to burn them alive.

Yet in other respects the comparison holds firm. Journalism is political, not simply in its divisions by party allegiance, but in its internal as well as external exercises of power, patronage and preferment. (It might be argued that it is religious too, in that it has its own belief systems, its dogmas and doctrines, its icons, its holy places and its zealots).

Journalism has a place — and a vital one at that — in the prevailing polity in which it operates: “Speaking truth to power” usually covers it. Journalism, either practised by the individual citizen through the web or under the auspice of one of the brands of the MSM, not only has a role but is a necessary component of a working democracy.

If its place has been derogated from that social fabric, then a reformed tradition needs to be established to take it forward. It’s important to stress that the Reformation wasn’t about regulations and codes of practice. It was about a way of being, about living an authentic life (and of course, for many, dying an authentic death). And it’s reasonable to suppose that journalism needs a reformed tradition, as it emerges from a period of abuse and corruption, and seeks to re-establish its authenticity — not least so that it burns with pride again in the hearts and minds of those who practice it. We might also look at some of the characteristics that a Media Reformation should adopt.

DISSENT — The dissenting voice says: This isn’t good enough — it doesn’t have to be like this. Journalists tend to be well-suited metabolically to dissent, for at its root lies scepticism and inquiry and a sense that the common good isn’t best served by the vested interest of an establishment. It may be dissent from prevailing managerial nostrums that commerce is king, that clickbait is the only way to prosperity, that Facebook and Google are just platforms and not publishers, that newsprint is dead and that readers are idiots. Overall, it’s dissent from the view that journalism, as we’ve known it, is over.

HERESY — Conventional wisdom has it that print journalism is either dead or dying; that journalism isn’t and can’t be as good as it used to be; that advertising revenues have been irretrievably lost to social media; that “traffic” is the only meaningful commercial measure of online journalism; that journalism, by its nature, is poorly paid; that fake news is an irresistible component of contemporary journalism; that online readers have no brand loyalty; that there is no such thing as independent journalism. These are all shibboleths to be challenged. To speak a noble heresy against them is to be an active participant in reformed journalism.

DECLARATION — Martin Luther is said to have nailed his 95 theses to the door of Wittenberg church. We may need no such drama, but it’s as well that our journalism knows what it is meant to be, what it looks like at its best and, vitally, what it is not. Such declaration might consist of re-affirming the mission to inform, analyse and entertain; to expose wrongdoing and reveal malpractice; to scrutinise political and economic policy and to hold the rich and powerful to account; to support and promote justice, both social and in the rule of law; to make known the unknown and to say the unsayable; to speak the truth, so far as we understand it, and to serve the common good.

FUNDAMENTALISM — It has understandably garnered a poor reputation in comparative religion, being associated with those movements that have politicised, militarised and radicalised their faith systems, invariably as a consequence of perceived fears that their particular culture is under threat from external forces. But to be fundamentalist can enjoy the more generous and positive interpretation of adhering strictly to one’s principles and disciplines (not to mention beliefs). And some things don’t change in journalism: The search for the story; breaking stories readers haven’t known about; moving the story on; leading thought, opinion-forming, setting the agenda.

JUSTIFICATION — To be justified was to mean, at the Reformation, to need no further validation. The faithful were, in Luther’s central tenet, justified “by faith alone”. There was no intermediate licensing authority, no earthly institution whose approval of one’s religion needed to be sought, whatever the Church might claim for itself. It offers a parable for our times. Journalism needs no validation, no external authority. It simply is. It follows that it doesn’t need a state regulator — indeed, that would compromise the nature of its existence. Journalism is justified by its faith (in itself) alone.

At its heart, journalism has within it the capacity for reform to meet future challenges, whether from a technological revolution or from its own desire to clean up its act. And journalism must act to reform itself, before any external authority moves to do so on its behalf. There’s a lot at stake — and we don’t want to be burnt at it.

George Pitcher is former chair of Jericho Chambers and an Anglican priest. His latest novel, A Dark Nativity, has just been published. 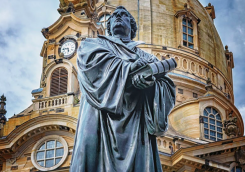