Charlie’s call for a future where people come ahead of money, togetherness is valued and customers come first is compelling. We’ve been working on what we can do to help move us in the right direction, and a week ago I found myself interviewing the irrepressible Zoe Williams on what she thought needed to happen.

To kick us off I challenged her on whether things right now are quite so bad as people are making out. It appears the “catastrophic” state of politics is genuinely keeping her awake at night. She traces the roots of hard Brexit and Trump back to the crash of 2008, saying that discontent has been quietly germinating ever since. The situation has taught her to think in longer time frames: “A crisis has a long tail”, she says, and it is “chilling” how long it takes between a crisis hitting and its effects being felt – “it took ten years of stagnating wages before people really felt angry”.

All a particular kind of very ‘obvious’ leader. Male. 50-something. White. Alpha in personality. Driven. Possessing a certain worldview informed by wealth, privilege and some distance from the harder-edged realities of life (even if that is where a few of them started out).

These are the leaders we expect to see, and, on one level, we find them reassuring because they appear to know everything. Margaret Heffernan calls them the “superheroes”, making that image of Trump dressed up as Superman stick in your mind longer than is savory.  For me their ilk was demonstrated at a McKinsey event last year when a self-important man in a pin-striped suit sat on a stage in front of 200 women and issued categorical answers on questions as diverse as the future of self-driving cars and the economic model of Malaysia. The women next to him sat largely quiet, despite having more impressive credentials. Needless to say there was much mirth over coffee outside.

The psychologists tell us leadership has “fuzzy boundaries”. We know what leadership looks like but can’t precisely pin down what it’s made up of, or where to draw the leader/ follower boundary. In reality the concept is dynamic, varying moment to moment and therefore never quite absolute. But we all recognise the superhero model and the temptation to buy into the myth.

The problem, of course, is that as businesses become more complicated, more networked and more vulnerable to change, the deities who don’t need to check or reflect or learn are of as much use as a phone box in Leicester Square. Instead we need “the mobile” option – those with different backgrounds, different outlooks and those who, rather than driving their own alpha agendas, can tap into the good will and wisdom of the people around them. Those who encourage collaboration over competition.

For this reason, Jericho has been working with Jane Storm, former HRD lead at Tesco to create The Less Obvious Leaders programme. Helping businesses to grow leadership talent in people who demonstrate leadership potential in less predictable ways. They may be introverts, they may not show off, they may prefer to have all the facts before they issue a view. They will probably not look and sound like those who have gone before them. Yet they will have their wisdom and be better able to cope with the “fuzzy”, unpredictable future world of work, of business and of politics.

Our role is to help these people be visible in the organisations they work for: to be seen and heard and credited with their achievements. We’ll be working on this over the next year. If you think you know people in your business who are talented but not cutting through, let us know. Maybe we can help. 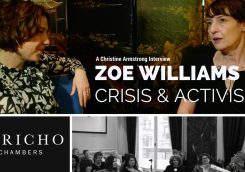