Reflections from the Programme so far

Since late 2018, Stifel and Europe CEO Eithne O’Leary have been working with Jericho on the Ahead of the Curves programme, exploring current status and future trends in key industry and service sectors – building a dedicated Stakeholder Community of 600+.

Our conversation and investigations have covered four discrete areas: The Future of the Professions, Social Justice and Big Tech, The Ethics of Disruption and most recently The “Double-Wicked” Challenge – an opportunity to think through imaginative yet practical answers to the challenges posed by COVID and Brexit together. The power of people, the power of technology, the power of populism. They are wedded together by the process of constant change and the aim is to remain Ahead of that Curve.

The wise-crowd Stakeholder Community of experts and specialists has grown organically based on peer-to-peer relationships and includes Academics & Authors; Business Leaders; Politicians & Policy-Makers; Media & Commentators; Regulators & Trade Bodies; and Tech. Disruptors – all who have generously offered their time and experience to bring to bear on some of the important business issues of the last five years.

All sectors are currently experiencing discomforting change. But that change is not fast enough for some. Some believe that the last 20 years have, in fact, been a “Great Stagnation”, a technological plateau requiring much greater exertions than in the past to achieve fast economic growth.

Peter Thiel, a card-carrying member of the Great Stagnation society, sees an epochal change, recently telling Forbes magazine: ‘One should think of Covid and the crisis of this year as this giant watershed moment, where this is the first year of the 21st century. This is the year in which the new economy is actually replacing the old economy.’ Thiel thinks that the historical transformation promised by the internet was aborted in March 2000 when the tech bubble burst. It was too early. ‘But I keep thinking that maybe this time the movie is going to have the alternate ending–which is somehow the tech is actually going to work, at least in the aggregate,’ he says. “Some will fail, some won’t, but on the whole, the transformation of the 21st century is going to work.”

As Tyler Cowen put it in his 2011 book The Great Stagnation, ‘The new model is that there are periodic technological plateaus, and right now we are sitting on top of one, waiting for the next major growth revolution.’ For Cowen technology had become a bit of a luxury, noticed more often for the problems it caused than for the benefits it had brought about. Certainly, as we discussed in the Stifel Technology programme, the problems of Big Tech are legion. But, there again, it will be tech that helps all of us solve the crisis of climate change. Those benefits were, after all, not so recent that one could remember the world before them. Cowen wrote: ‘The period from 1880 to 1940 brought numerous major technological advances into our lives. The long list of new developments includes electricity, electric lights, powerful motors, automobiles, airplanes, household appliances, the telephone, indoor plumbing, pharmaceuticals, mass production, the typewriter, the tape recorder, the phonograph, and radio, to name just a few, with television coming at the end of that period. The railroad and fast international ships were not completely new, but they expanded rapidly during this period, tying together the world economy.’ They had quite a lot in common, exploring a generalised technology to the end: advanced machines combined with fossil fuels.

More recent decades have been disappointing. Server centres consume huge volumes of those fossil fuels – many simply to store Tik Tok memes. Compared to what people experienced in the past, our technologies are better versions of old things and the pace of change has slowed down markedly. Yes, we have the internet, but so far it has proven more of a boon for the intellectual curious than the industrious or the revolutionary. So far the internet has only interpreted the world, but the goal is to change it.

As the economist Robert Gordon argued almost a decade ago, ‘invention since 2000 has centred on entertainment and communication devices that are smaller, smarter, and more capable, but do not fundamentally change labour productivity or the standard of living in the way that electric light, motor cars, or indoor plumbing changed it.’ Are Deliveroo and Just Eat – despite their eye-watering valuations, earth-shattering in their innovative power? All they have done is leverage covid and a reluctance to go out. We used to walk down the road for some fresh air to select our curry or fish and chips.

Perhaps the pandemic could change that. The first set of links is rather direct. With the economic downturn, the pressure for short-term financial results has temporarily abated and many companies are using the moment to invest in new technology. The pandemic may not have brought about new ideas of doing business, but it gave a decisive boost to ideas that were already available, with many services seeing unprecedented bursts in digitisation. In 2020 grocery delivery grew by more than 10 per cent in China, the United Kingdom and the United States. The more digital companies and services become, the more automated they need to be, so Covid-19 has also expanded the role and promise of robotics. Some surveys suggest that in the United States at least the share of firms with fully automated fulfilment centres may rise by 50 per cent within a year. Meanwhile, Stripe, a digital payment platform, has been valued at $95 billion….

So how do existing legacy businesses cope with the creative destruction coming down the pipe? From law firms to bricks and mortar retailers. Where are the certainties to which they can cling? How can they predict their futures? This is tricky because as Margaret Heffernan writes in Uncharted “ineradicable uncertainty is now a fact of life…being prepared is more creative and more effective than planning.”

That is what the discussions both past and future seek to help provide – an informed preparedness. And what is going on at the coal face of this newfound hybrid working system that so many of those who do not have to leave their house to work are now living?

Another common theme in all three strands of investigation has been people or “talent.” That the young coming into the professions were a trickier proposition than generations before came up repeatedly in the Professions series. What will Brexit and pandemic to do Talent in the UK? The young have experienced some of the worst side-effects of covid. What will employers make of a generation whose education has been so badly disrupted?

As a recent FT article suggested “employers and employees need to return to first principles — and make some hard choices. You have to be much more thoughtful about how you use time and place, and at the centre is a question of what helps the person be productive. We simply do not know or understand how working arrangements affect the drivers of productivity, such as energy, focus, coordination, and co-operation.”

But what if in an effort to produce a post-Brexit great acceleration in Financial Services, to create that Singapore on the Thames free from bothersome red tape, we find some unintended (if predictable) consequences.

As Dan Davies wrote recently in The Guardian:

“It’s a false hope when the chancellor tries to claim that by being “nimble” with stock exchange listing rules, the City of London can claw back enough market share to make up for the business it’s going to lose as a result of Brexit. Together with his talk of a “Big Bang 2.0” – a reference to Margaret Thatcher’s financial liberalisation in the 1980s – it seems clear that Rishi Sunak is working off a wrong economic model, which is not any less wrong because it’s shared by nearly everyone working in the industry and by nearly all the external critics of finance.

The model is one where you can run the financial services industry hotter or colder by, effectively, grabbing hold of a big dial and twisting it in the direction marked “REGULATION” or “DEREGULATION”. Plenty of City people voted leave pretty much based on this exact model; they thought that Europe had twisted the dial too far towards regulation and that an independent Britain could turn it back the other way.

“The trouble is that regulation is not an undifferentiated quantity that you can pour out more or less of. Each individual regulation is precious and unique, interacting with all the others to produce a complicated, occasionally bizarre but basically coherent system that constitutes the fundamental environment in which it’s possible to do financial business at all. And like maritime safety rules or pharmaceutical industry standards, where “every rule is a tombstone” – the majority of them are on the books because of something that’s gone badly wrong at some point in the past.”

So, where do we now turn? Irrational exuberance versus ossification. We’ve been here before. One element that ties all three conversations is the appetite for unconstrained risk. Abolishing the century-old model of legal partnerships is a risk; letting Facebook become the global market square for social intercourse was a problematic call; believing leaving the European would be a balm for our national wounds.

Now, according to Mark Carney, the recently departed Governor at the Bank of England in 2021 we are at an inflection point. “We are living Oscar Wilde’s aphorism – knowing the price of everything but the value of nothing – at incalculable costs to our society, to future generations and to our planet.”

As we move into the next phase of the Stifel Ahead of the Curves programme, members of the community will be reflecting on where we have been, considering where we are and, critically, where we go next.

Please get in touch if you would like to contribute or become part of the next steps of the programme. 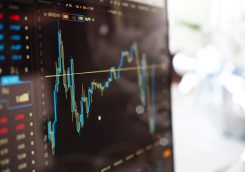