It is 9am in the UK on the morning after the day before. 24 hours ago, Donald Trump, without basis, said he would try to end legitimate counting efforts and claimed victory in the election. He has since threatened what appear to be without foundation legal challenges, simply to reinforce his preferred narrative. While, as with Brexit, we ignore the popular groundswell in support of Donald Trump at our peril, never in recent times have the dangers of fake news and unfettered “spin” seemed more of a threat to both democracy and decency.

In many ways, Trump’s outrageous claims are the culmination of a decade-long descent into darkness. Back in 2008, in Citizen Renaissance, Jules Peck and I looked optimistically at a tech-enabled democratic future – widening participation and enfranchisement and, chanelling activism in a positive way, empowering the fight against what has since become the climate emergency. But we always knew there was a dangerous flipside to this perspective – as events of recent days have evidenced.

The need for new models of engagement have long been as apparent in business as they are in politics – certainly since the Global Financial Crisis of 2008. So it is perhaps apposite that, yesterday, I delivered the following talk to the Public Relations Institute of Ireland – reflecting on what I have learned since publishing Trust Me, PR is Dead in 2014 and the models required to re-connect business with the Build Back Better challenges that confront us today: social cohesion; poverty; race equality; the climate emergency; public health; and, now, democracy itself.

I hope you enjoy the read. As ever, I welcome your feedback.

Thank you for inviting me to join today’s panel.

It’s almost eight years to the day since I sat on a Chicago park bench and shared with Richard Edelman five reasons why I thought the PR industry model was broken and the big agency model broken further still.

My concern was that the communications industry had become hugely disconnected from critical societal issues; the stakeholders it was committed to serve; and was creating a vacuum of leadership in business and politics that bad actors would inevitably fill.

Build Back Better is being used now as a slogan to help re-configure our world post-COVID – but the need to build a fairer and more equal society was already all-too-evident then.

Four years after that Chicago conversation – right before the Brexit referendum and 2016 US Presidential election – my presentations included a split image of Boris Johnson and Donald Trump. The caption read: “The Future Is Pretty Ugly”.

Richard was enthusiastic about my plan. But his response was predictable. We would do nothing about it. So it’s with a wry smile that I read recently about Edelman’s conversion to my “actions, not words” mantra and a significant investment in data which, back in 2012, was already long-overdue. These were two of the five issues I identified for change. 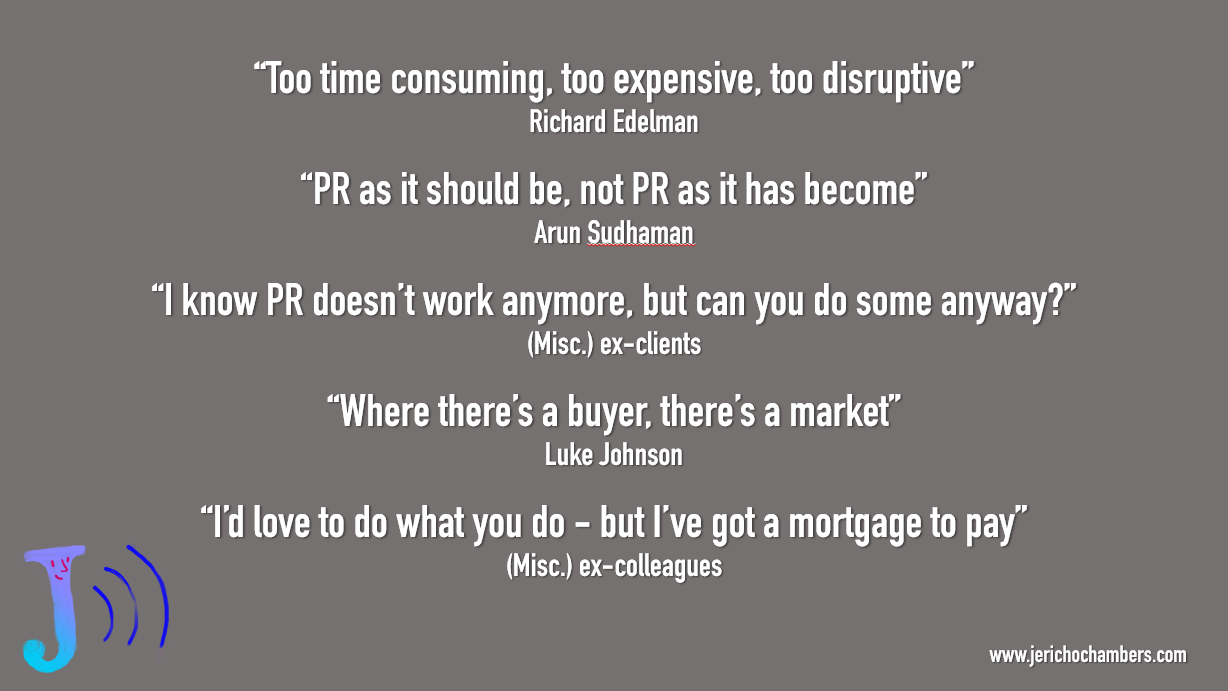 Preparing for today, I reflected on the feedback received then. I was, without doubt, naïve by the bucketful – not least on the huge shifts required to take clients and agencies into the brave new world I was suggesting. I woefully under-estimated the determination of a successful industry to protect the financial status quo and, understandably, those in employment to keep their jobs.

I’ve probably tried about 20 new business models since founding Jericho. None have worked that well: wrong people, over-ambition and needless complexity being the most common reasons. But I’ve stuck with one ENGAGEMENT & POLICY DEVELOPMENT model that has worked. This helps re-connect major corporations with their employees, customers and the real world problems that bedevil us all. Communications can help build a better society for the common good. 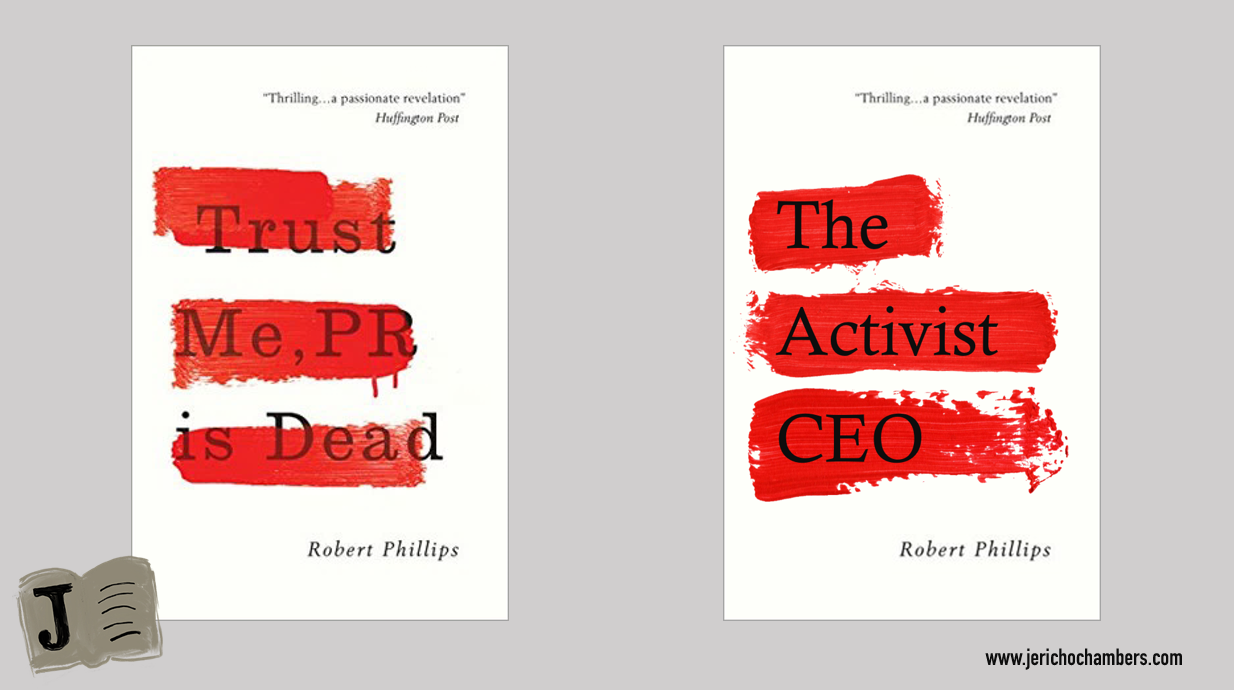 The book that emerged in 2014 to argue this had the wrong title. I let myself be convinced by a publisher in search of PR click-bait. The Activist CEO would have been a better title and more accurate reflection of what was in my head – that business leaders had to think and behave like Social Activists and re-configure their organisations as effective social movements. This would drive the “purpose” agenda more authentically – aligning progressive social and political thinking with the world of business and comms.

I was already worried about all the purpose-peddlars out there. My mood has darkened since. “Progressive Communications” cannot be just a feeble branding exercise, just as ESG must now not be allowed to become the new CSR. 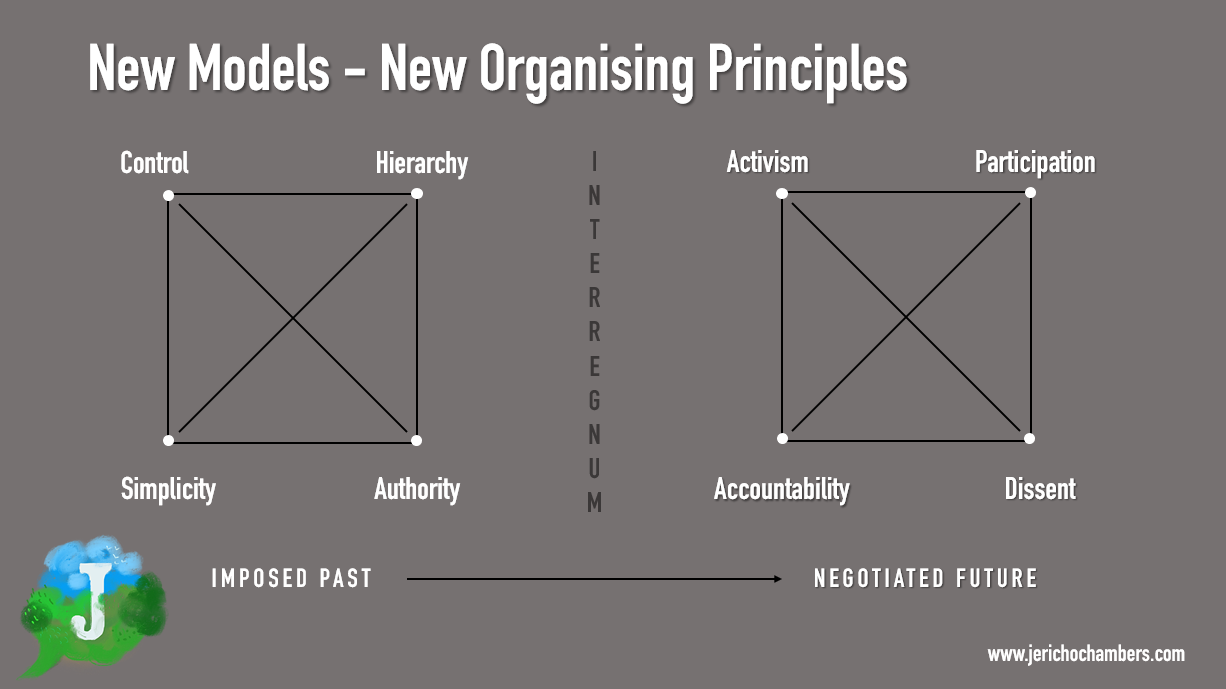 The Jericho model – which we continue to test & refine – is based on four principles: ACTIVISM; ACCOUNTABILITY; PARTICIPATION; and DISSENT. More on these in a minute.

The model frees us from the command & control approach of 20th century comms – and an obsession with “managing the message”.

“Storytelling belongs not to those in swish agencies or big boardrooms but to all of us – especially those with lived experiences. It’s about sharing with, not doing to, those with whom we want to engage.”

None of us has the right to impose the future – it can only be negotiated. In this new model, diplomacy and negotiation skills are key assets for the comms. practitioner – along with an ability to listen and learn beyond our knowledge and comfort zones. 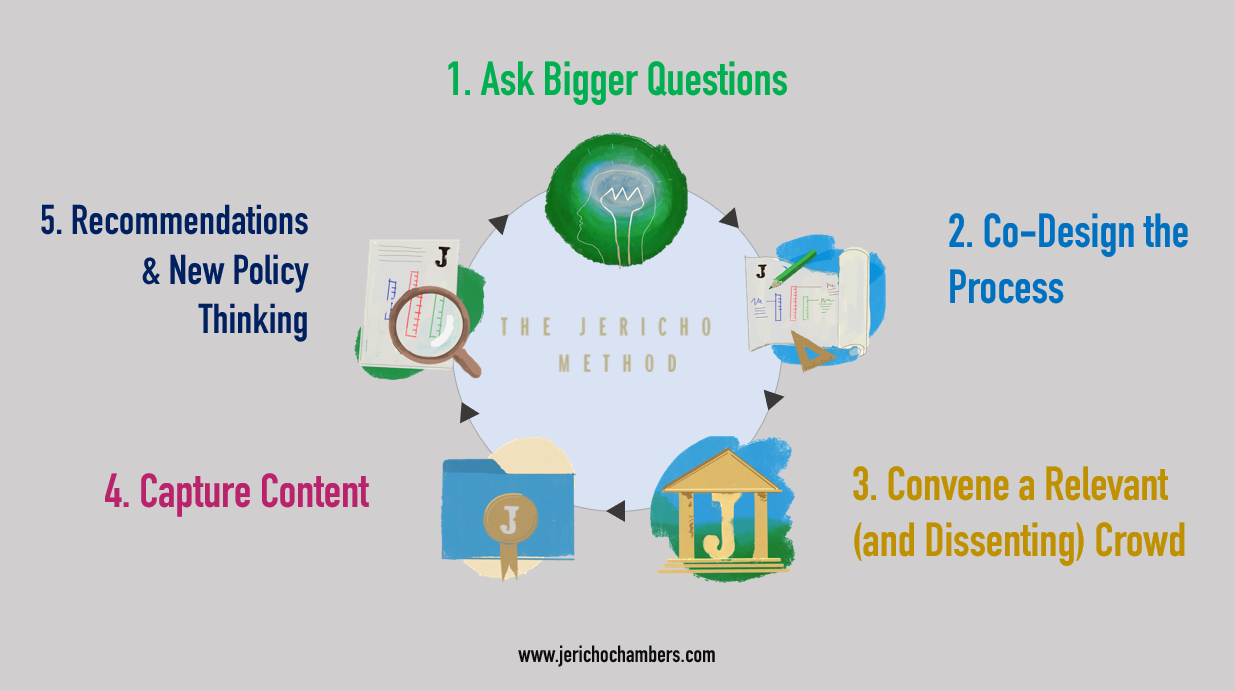 Elevate the conversation beyond the conventional & transactional. Frame what you’re doing within a wider societal context. Start small – use internal stakeholders and critical friends to help shape initial thinking.

– Convene a Relevant (and Dissenting) Crowd:

Build an Influencer Community – including those with Lived Experience – on a peer-to-peer basis.  Escape the usual echo chambers by introducing dissenting views – but always in a constructive mindset.

Peer-to-peer development is essential for trust and relevance – these are not arbitrary stakeholder lists, created by the most junior member of the team.

Maintain constant dialogue as the process develops – listen, learn & adapt. The programme is advised and guided by the community – and accountable to it.

Use content strategically. Capture new ideas & (policy) recommendations. Combine contributions from within and beyond the company – the influencer community all become active participants. Share content across community as part of on-going dialogue and advisory – a dynamic process.

Identify additional bullseye stakeholders and reach them on a peer-to-peer basis. Work alongside all other agencies to help socialise new thinking with decision-makers and those that influence them: there can be no monopoly here.

KPMG committed to the Jericho Model in 2014 and, six years later, the Global Responsible Tax project is engaged with 1,700 stakeholders worldwide – developed peer-to-peer and based on the four principles of activism, participation, accountability and dissent. Alongside fierce critics of KPMG and the Big Four sit senior players from the IMF, EU, World Bank and others. We are shaping policy collaboratively – vital now, mid-COVID, as we all try and figure who pays & how?

The model works in practice.

As the model has evolved, so we have tackled a variety of client challenges – from Energy to Infrastructure; Tech. to Transport; Housing to Heritage.  Of course, some  programmes have been more successful than others.

“We’ve not always monetised our work successfully. But by removing financial & growth targets and profit goals, we’ve allowed ourselves to think first about what is right, rather than how much money we can make. I appreciate that this is a far-from-universal approach in the industry. But the rush to monetise everything and everyone was, for me, always part of the broken model of old.”

With the pandemic raging, two of our newest programmes – on Young People and Public Health – evidence our own purpose and commitment to meaningful change and a better society.

We have a number of terrific clients who fund our work and allow us to curate new thinking on their behalf. They are courageous leaders. Together, we are re-framing the client/ consultancy relationship – strategic, not transactional; partnership in action.

There is then no need to witter endlessly about “deserving a seat at the top table” – because when the issue is important enough and the strategic approach relevant and resonant, you’ll be there.

I was in a privileged position in 2012: at a stage in my career where I could afford to experiment and even fail. That said, the past few years have not been easy. But I remain determined that this collaborative, coalition-based approach to Public Engagement and Public Leadership does work.

KPMG’s Jane McCormick argued at the start of our work together that the world had had enough of “men on mountaintops, shouting through megaphones” and she is right. But, to make it all happen, we had to embrace uncertainty together, both personally and professionally; re-affirm purpose; believe in common good outcomes; and take risks that went way beyond the conventional corporate or communications norms.

But so far, so good. We now need to do more. To Build Back Better in a world of COVID, Black Lives Matter and Brexit, there is simply no time to waste. 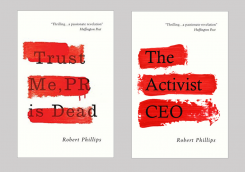