People often ask us what we do here at Jericho. And, like cobbler’s children, we have sometimes struggled to capture the breadth of our work in a nutshell. So, to tackle this, we’ve refreshed our website, organised around our three areas of focus: Challenge, Convene and Collaborate. 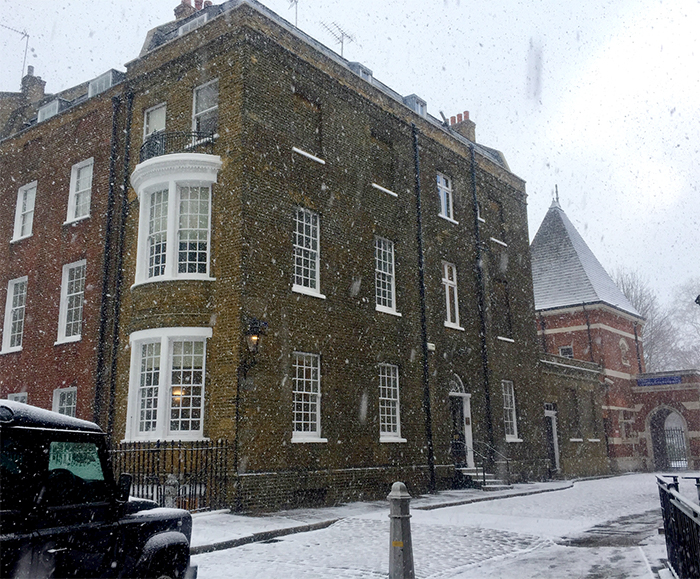 Feedback on the new site is welcome – please take a look, challenge us, and get in touch with thoughts and ideas. Our goal is that you will, if asked, be able to tell others what we do.

We are also taking soundings on the Jericho Theory of Change – a collaboration across Jericho partners and with organisations who share our ambitions for a better society, rooted in common good goals. Again, we welcome those wanting to join this coalition.

We have organised this Notices around those themes: there is a lot to update you on so do please jump through to the things that are most relevant to you.

Wishing you happiness in the snow if you love it and warmer weather soon if you don’t. 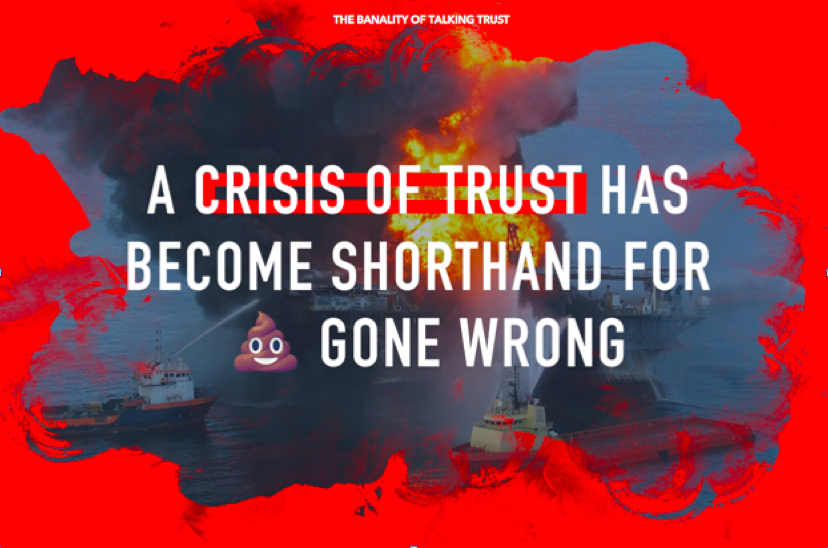 Jericho friends and partners have been writing and publishing extensively in the first months of 2018. They have roamed across subjects and have challenged: digital dinosaurs to evolve; the charity sector to re-think its power structures and shed its shroud of delusion; the Labour party to embrace a diverse left; urban planners to shape cities according to geographical megatrends; the global elite to stop banal chatter about trust; Ryanair to be polite, and everyone (not just film stars) to tackle sexual harassment.

Meanwhile, Christine Armstrong’s book, The Mother of All Jobs: How to have children and a career – and stay sane, is now in its final stages, scheduled for publication in September. It challenges, people (and companies) to slow down the consumer treadmill and stop work eating into life.

The start of the year also saw partners on various speaking platforms, with more to come in March, April and May, Neal Lawson spoke at the Good Society conference in Berlin – his thoughts are captured in a podcast for The Guardian on the subject of Universal Basic Income, its potential (and practicality) as a solution to precarious work, automation and for a happy, healthier society. Robert Phillips meanwhile has been challenging groups of business leaders and academics to forget trust metrics and instead think meaningfully about accountability and what trustworthiness looks like in practice: acting with honesty, competence and reliability.

Last year Jericho actively convened a ‘wise-crowd’ community of 2500+ (see box below for an overview of 2017 in numbers) on multiple issues related to a better society: from the circular economy, to tax and transport. In partnership with our clients, we asked questions on how organisations, industries and citizens can successfully adapt to a changing world, and, crucially, play an active role in changing it for the better. 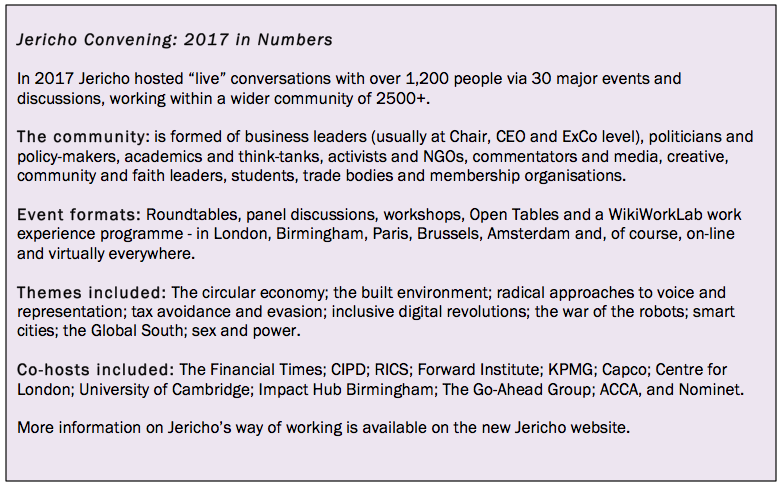 As we move into springtime, momentum (not that Momentum) continues to build. Here’s a quick round-up of some of our most recent work in 2018.

“It’s quite like the ‘What Have the Romans ever done for us…?’ scene in the film Life of Brian. When you sit down and think about the benefits of good regulation, there are actually quite a few.” – David Brown, CEO, Go-Ahead Group, on the pitfalls of a ‘burn the red-tape’ approach. 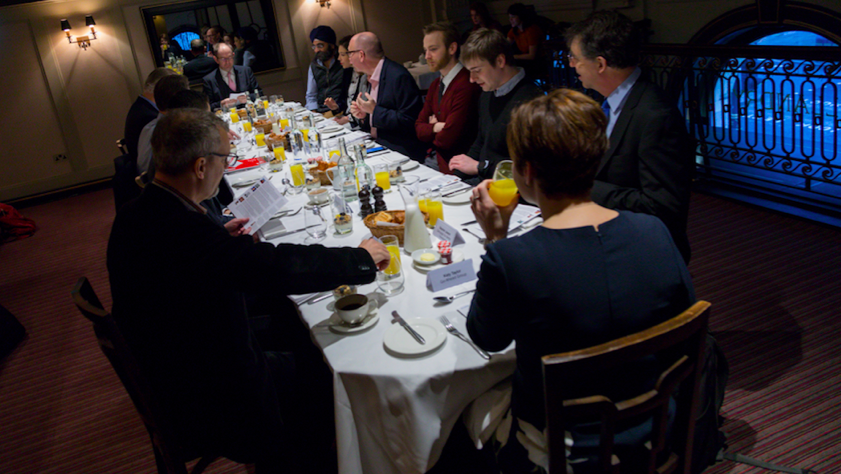 The latest in the Moving the City for Good discussion series, convened on behalf of David Brown and Go-Ahead Group, ‘Radicalising Regulatory Frameworks’ discussed recommendations for the transport sector and beyond. This follows 2017 work on challenges of air quality and smart cities. Matthew Gwyther’s article and podcast, based on the discussion, covers the privatisation debate and replacing industrial era approaches with more citizen-centric, common-sense ways forward in the regulatory space. Indy Johar’s article on Boring Revolutions further develops themes from the roundtable.

In the coming months, Go-Ahead will be hosting a national Open Table event in Oxford: Planes, Trains & Automobiles…and Buses: Turning Smart Thinking into a National Conversation. This will funnel Moving the City for Good conversations into policy recommendations for transport nationwide. Watch this space for more information.

Cyber Security: Fighting the Global War on your Desktop

“Cyber security is critical to Britain’s digital advance. Given our nation’s heritage and skills, combined with government ambition, we have the potential to be world leaders in this field.” – Russell Haworth, CEO, Nominet. 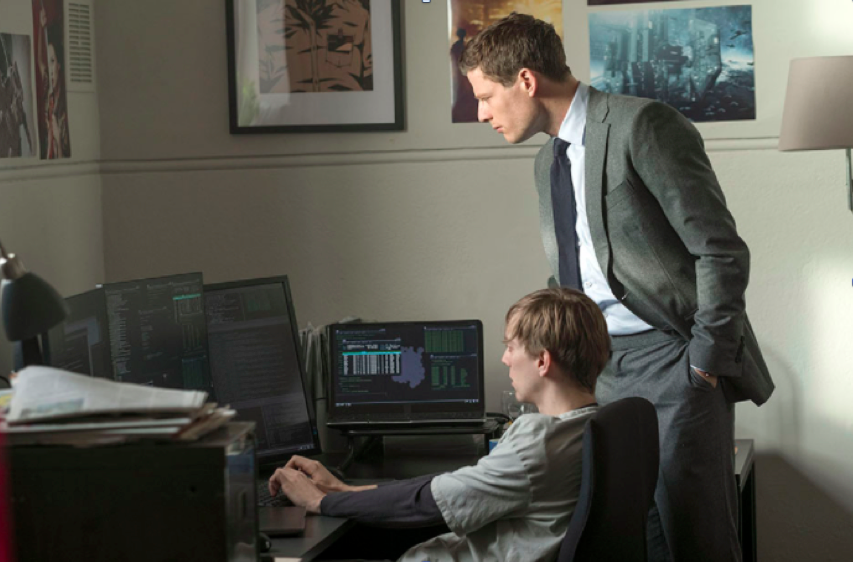 A scene from BBC drama McMafia. According to the programme’s creator, Misha Glenny, who spoke at the roundtable, “The new criminals ruling the world are not traditional heavies. The internet alleviates the need to deploy the same level of violence. Anyone can wage war from behind a screen.”

Nominet’s Digital Futures Index, developed in partnership with Jericho, measures progress in the UK towards a Vibrant Digital Future, one pillar of which is ‘Security’. Meeting in January 2018, convened by Jericho and Nominet, a panel of crime, tech, business leaders and cyber security experts shed light on cultural, as well as technical aspects to cyber security. In 2017 (the year of Cybergeddon), 7/10 large businesses identified a security breach with an average cost of £20,000. So why is it that just 1/10 firms have cyber security management plans in place? Matthew Gwyther’s article and podcast gives a full summary of the concrete steps Britain (and its businesses) can take to safeguard its internet.

In not-unrelated news, in April Jericho will host an evening discussion with business leader Bill Browder, of Hermitage Capital and Magnitsky Law fame.

“It’s not just executive pay – we must tackle our broken business culture.” – Stefan Stern, Director, High Pay Centre, management writer and member of the Future of Work is Human community. 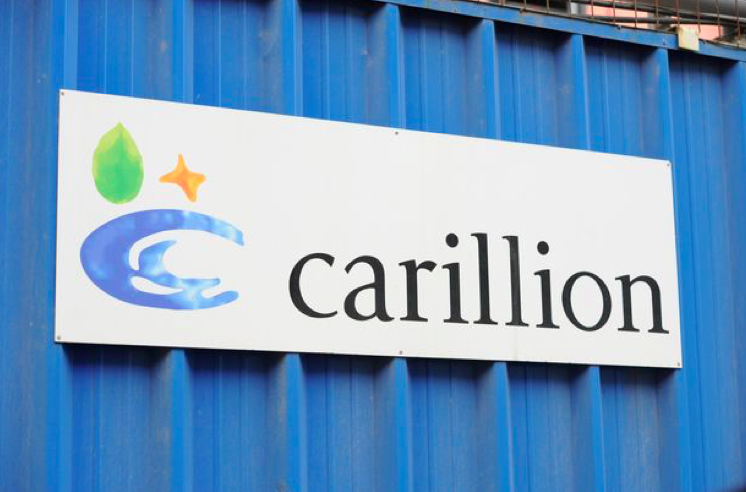 Is corporate governance a challenge of compliance or is it really corporate culture that needs to change? What role for the HR Profession? In early February Jericho and CIPD hosted a high-level conversation on how best to strike the balance between shareholders and society, maybe rewriting current legislation (does Section 172 of the 2006 Companies Act need an total overhaul?), and exploring the potential for HR to take the lead in introducing, measuring and promoting the importance of better governance cultures. A full write-up of the event is available here, on CIPD’s website. To be involved in the future governance debate (also related to Jericho’s Strong Economy work, below), get in touch.

Why do we find it easier to talk about Gender than BAME Diversity? 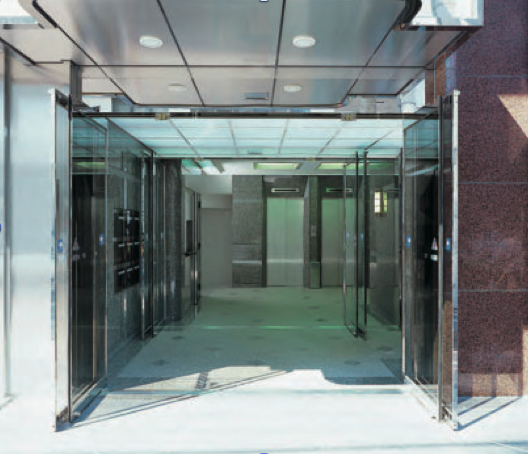 This was the question the 5th CIPD HR Director Forum put to a group of Diversity & Inclusion experts. According to Green Park Leadership 10,000 report, white women are twice as likely to reach the top three positions in a FTSE 100 company compared to an ethnic minority male and 20 times more likely than an ethnic minority female.

So what is holding us back on this issue? Is it sensitivity around talking race? Unconscious bias? Conscious bias? A full write-up, including an exploration of the cultural levers for better inclusivity, will be posted shortly. Watch this space.

This Forum followed a session on Sexual Harassment, held towards the close of 2017.

#ResponsibleTax: From Principles to Movement

“We are a growing network of those determined to drive principled change for the better.” – Jane McCormick, Global Head of Tax, KPMG International 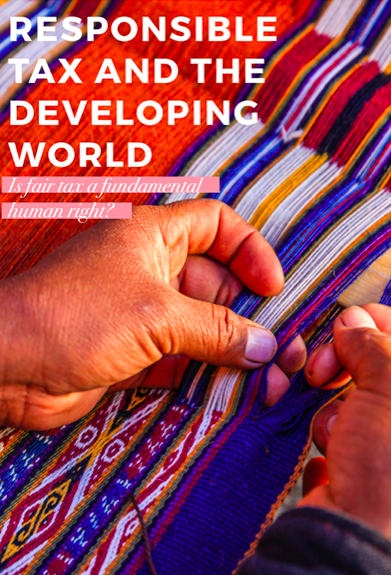 As Jane McCormick notes, the #ResponsibleTax movement is gaining global traction, with “main event” panels on the subject at WEF, and players such as B Team recently announcing its own responsible tax principles. At a January event celebrating 2017’s e-publication, Responsible Tax and the Developing World, a panel of private sector representatives, academics and NGOs, earmarked 2018 as a ‘Year of Action’. KPMG’s Chris Morgan also hosted a discussion on Responsible Tax and the Developing World at the UN. Further publications, meetings, policy recommendations and collaborations with international organisations and NGOs are scheduled for 2018. Watch this space, or get in touch to be a part of it.

“What makes an economy strong has never been more disputed. One person’s sign of strength is another’s signal of profound weakness.” – Foreword to The Strong Economy edition of Jericho Times, scheduled for publication in March 2018. 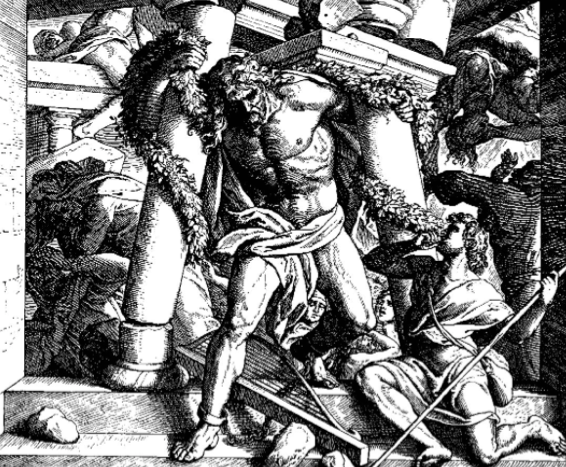 If we are to believe the dogmas of mainstream political discourse, the economy is doing well if GDP rises and growth can be reported and measured. But LIBOR, VW emissions the Sports Direct warehouse scandal, Persimmon bonus’ and much more besides all took place under relatively healthy ‘growth’ metrics. What might an alternative discourse look like for a strong economy? How to make it accountable? Where are the new ideas and what role do current policy-makers play in its implementation?

Following the Imaginative Leaps edition, the next issue of Jericho Times draws on expertise, enthusiasm, experience and ideas from across our many communities. A collection of essays explore – and advocate – better ways to realise economic strength; new models for thriving societies. Topics include localism, tax, infrastructure, work culture, professionalism, regulation and civic engagement. To contribute to this conversation, get in touch.

Details of the 2018 WikiWorkLab, scheduled for July 2018, will be announced shortly. Over the course of a summer week, twenty 18-24 year olds will collaborate with the Jericho network seeking answers on the provocation: Artificial Intelligence; friend or foe for the workplace of the future. Candidates, potential speakers, sponsors and anyone with an interest should get in touch with Rebecca Perrin. This will be our third year for WikiWorkLab, run in partnership with CIPD.

This edition of Jericho Notices has sadly been unable to cover everything in an action-packed eight, early weeks of 2018. More programmes are in the pipeline – including: ideas around a major national post-Brexit study “Cornershop Conversations”; the implications of the “tech-lash” seen through a citizen-centric lens; and a summer Bootcamp for senior business leaders on the real world of social and digital innovation. Further information on all this exciting stuff in the next edition

To find out more about the programmes we convene and curate, or to be part of the change in movements on tax, transport, cities, work, or strong economy thinking, please get in touch. We will be delighted to hear from you.

We wish you an optimistic and happy spring – do find time, if you can, to take a look at the refreshed Jericho website and let us know what you think.