This Jericho podcast, produced in association with Stifel, is about Davos Man’s worst nightmare. The combined effects of the pandemic, Brexit and the war in Ukraine have sent levels of geopolitical and business risk right up. The interconnected, globalised world that Davos Man created is slipping into reverse. International trade and investment is falling and protectionist barriers are on the rise. Economies are shrinking and unemployment is growing.

For most of the past three decades, globalisation has been the norm — neither questioned nor contested by any of the world’s largest countries. It has been seen, in short, as the future. Increasing connectivity and expanding markets have made everyone richer. If you could drive costs down by making iPhones in China or fire grates in India, why hesitate? And it worked, for millions. Poverty plummeted and life expectancy soared. By buying cheaply, we shared our wealth.

However, the disturbing events of the last few years have led plenty of companies to realise they are too dependent on production processes that are out of their control. Tariffs, trade wars and China’s loose attitude to intellectual property rights were serious concerns long before Beijing’s ability to handle an epidemic was called into question. The economic side of populist politics has led to Donald Trump in the US and Brexit in the UK. Self-sufficiency and being masters of one’s own destiny are the new mantras.

The programme features three interviewees who have thought about these issues very deeply.

Firstly, Erik Britton of Fathom Consulting – an economist with a sharp, experienced but very human mind. He talks about why globalisation since the early 1990s was a good thing and why now things are going to be very different.

Second, Professor Anand Menon of King’s College London who knows more about Brexit than almost anyone else. His unit even found a correlation between voting Leave and liking the TV programme “Mrs Brown’s Boys.”

Finally, Guillaume Meyzenq, a real live business person who is SVP at Salomon and in charge of their running shoes. For the last few years he has been tussling with the task of re-shoring production of their posh trainers from Vietnam and China back to the French Alps. It is no easy process…. 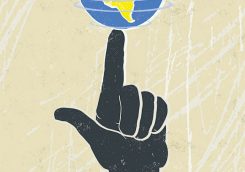