I am writing this Introduction, on Optimism, from the chemotherapy suite in a clinic in Harley Street, London. I am undergoing treatment for Stage 4 Bowel Cancer. The next six cycles of chemo have just begun – having already endured six earlier cycles and a 25-day radiotherapy blitz. I could take a pessimistic view of life but remain an optimist. The only things that make me feel unwell are the diagnosis and the treatment, rather than the condition.

Recently, I read a blog from a fellow traveler that said we must not let the cancer define us, however hard “the system” works to turn patient into victim. This is dead right. The past nine months has afforded much time for forced reflection on such issues and also on matters of faith. My optimism mostly remains.

A Madonna Moment
For the record, I write this as a Jewish atheist. During the act of Creation, so we learn from the mystical Kabbalah, vessels containing the sparks of light and life shattered and fell into the darkest depth of the earth. Mankind’s collective duty is to rescue and elevate those sparks of holiness from their fallen state.

The process of extracting the sparks is called “Birur”, meaning “clarification”. This is part of a larger cosmic plan called “Tikun”, meaning rectification or restoration of the broken vessels and, consequently, the restoration of the proper cosmic order. Put simply, the repaired vessels contain the light. This issue of Jericho Times is dedicated to “Birur” and “Tikun” – clarification and restoration. Because the world needs repair and more light.

Finding Jerusalem
Jericho Chambers accidentally finds its genesis in Biblical times. The original working title for our network of experts was Jerusalem: hints of Blake’s green and pleasant land, tempered by the radicalism of the Jerusalem Tavern and Jerusalem Passage – Clerkenwell homes to pamphleteers and Enlightenment insurgents. Jerusalem, we were scolded, was too polarising – so defaulted to Jericho, happily to discover that the Good Samaritan’s defining act of generosity took place on the Jericho road. This was the city where Jesus saved the Tax Inspector, hiding in a sycamore tree, from a lynch-mob. Serendipity, given four years of work since, helping KPMG build the global Responsible Tax coalition.

More famously, it was in Jericho that the walls came tumbling town – a point later captured in a Style Council lyric. Jericho 2019 is where we believe in trumpet signals and are committed to demolishing ugly walls.

Eyes Wide Open
I have been reading a lot by Margaret Heffernan recently (disclosure: friend & Jericho colleague; I am a fan), who has been an immense help in helping me find shards of optimistic light in a potential well of despondency. I am referring not just to Europe.

I have learned that it is all too easy to be a pessimist: politically, to join the swollen ranks of those-who-used- to-be-called-liberal-elites, throwing hands up in despair at Trump and/ or Brexit; and/ or to political leaders bereft of any intellectual gravitas; maybe joining the occasional peaceful march in protest at a world gone wrong; and/ or instead ceding control of our lives to the tech giants; but always hoping for some magical solution, as someone else’s courtesy. This is not a great condition in which to fester. Together, we urgently need to find an optimistic counterpoint to the cancerous false narratives of our times. We all need to Just Do Something. This is what Jericho is about – and what this collection of essays sets out to provoke.

A truly open and fairer society cannot by definition be closed in either thinking or ambition. There is genuine connectivity between what we write, say and do – about gender, technology and social justice; about being queer at work; about the need for better homes, places and all that connects us; about tax and trust; about a truly Caring Society and, as we have published elsewhere, one that supports a New Deal for our Children. Better thinking takes us all to a better place, especially when it is joined-up.

The beauty of humanity is that we can find it in ourselves to champion and embrace complexity, curiosity and uncertainty. We must eschew politicians’ cheap mis-use of history, PR spin and Mark Zuckerberg’s (proxy for many) infantilization of an algorithmically-certain future built in his image – and instead learn to love the unexpected. To find the sparks of light and rescue them from the depths of darkness.

Life worth living
All this resonates with my current trials and condition. I know that any attempted prediction of asymmetry is futile. Likewise, we must fight “the propaganda of inevitability”. Nothing is predetermined; we all have agency. Ours is a messy life worth living – professionally and personally – at times sad, desperate and seemingly indefatigable but always with sparks worth rescuing and restoring in a better place; a better society for all.

We continually fail to ask ourselves “what kind of society do we want?” Even if we manage to answer that, we then suffer a collective failure of imagination to take us there. We need a manifesto for humanity and optimism. These essays may help. 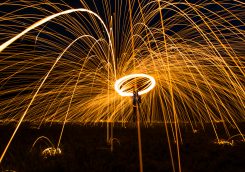