Don’t laugh but a candidate to lead the London HQ of Magic Circle law firm Clifford Chance wants to bring in a happiness officer and create “the most uplifting place to work in the world.” This has caused plenty of mirth among those who wonder, if you employ 26-year-old newly qualified solicitors on £150,000 per annum but then expect them to work 70 hour weeks for the next 25 years, you may have a satisfaction problem on your hands. Magic circle equity partners make a bare minimum of £1 million each year but reaching that pinnacle will see many fall by the wayside having experienced some not inconsiderable unhappiness along the way.

A few years ago I had a look at the Happiness Industry for the London Business School. Several estimable individuals have said that a national happiness index might be a better way of discovering how a nation is doing rather than bald GDP per capita figures. This is what I discovered:

These days few people have a good word to say about ex-British Prime Minister David Cameron. He keeps a very low profile and is, by all accounts, not too happy at the turn of events that led to the abrupt end of his political career. On the brighter side, however, he did agree to the introduction of a UK Happiness Index. (His predecessor Tony Blair had rejected the concept as “too flaky.”)

Four questions about wellbeing were, in 2011, added to the Office of National Statistics surveys. These are:  How satisfied are you with your life nowadays? To what extent do you feel the things you do in your life are worthwhile? How happy did you feel yesterday? How anxious did you feel yesterday? Each gets a mark out of ten. The UK was hardly trail-blazing. In Bhutan, they have been measuring Gross National Happiness (GNH) since 1971.

Cameron was responding to recommendations made by two Nobel economists, Joseph Stiglitz and Amartya Sen, who had called on leaders across the globe to move away from a purely economic concept of gross domestic product, which measures economic production, to wellbeing and sustainability. GDP has only existed since 1934 and its inventor, economist Simon Kuznets, was adamant it should not be used to measure the wellbeing of a nation. It’s limited by what it doesn’t take account of: the value of health and educational services, inequality and poverty rankings or the state of the environment.

Measuring and analysing levels of happiness is now a major industry. Since 2006 the Gallup World Poll has gathered data which is compiled in the World Happiness Report from the United Nations which sponsors an International Day of Happiness on March 20th. (Just as the 88% of the global population who live in the Northern Hemisphere, at least, are emerging from a long, depressing winter.)  This year the top ten happy nations were Norway, Denmark, Iceland, Switzerland, Finland, the Netherlands, Canada, New Zealand, Australia and Sweden.

The UK was up from 23rd to 19th position. Incidentally, the ONS confirmed this post-Brexit-vote Brit mini-happiness surge.  In 2017 the UK’s level of life satisfaction edged up from 7.6 to a record 7.7 out of 10, the highest level since 2011. Skipton in North Yorkshire (‘God’s own county’)  was positively ecstatic about its sense of well-being, scoring 8.3.

“Happiness is no longer a fluffy thing,” says Jan-Emmanuel De Neve of Said and an associate editor of the Happiness Report. ‘There is plenty of science behind it.” De Neve – a moderately cheerful Belgian whose home nation comes in at 17th – is a human mainframe of happiness data and analysis. “And business is now taking an intense interest in happiness at work and the link to productivity.”

One phenomenon that fascinates De Neve is the relationship between happiness and economic growth. His research suggests that happiness is more than six times more sensitive to economic growth when it’s negative. This explains, he maintains, why happiness measures in countries like Greece and Portugal plunged to the extent they did following the Great Crash. “Losses are always felt more keenly than gains,” says De Neve. Boom times don’t make people far happier but downturns make them rapidly miserable.

This theory might go some way to explain China’s positioning in the global happiness rankings. Despite astonishing rates of economic growth over the last twenty years – during which time GDP capita has more than quadrupled – China has been stubbornly stuck in the same place at around 79th position. (In reporting this the China Daily online noted that “China came out ahead of countries including Portugal (89) and India (122), with its citizens reporting more and more satisfaction with living standards and quality of life.”) De Neve suspects a combination of migration flows leading to strained family ties has put Chinese social capital under pressure but more detailed research is promised.

De Neve broadly agrees with the Easterlin Paradox which states that life satisfaction does rise with average incomes but only up to a point. Beyond that, the marginal gain in happiness declines. “Day to day happiness within societies peaks at about $75,000 per annum,” he says “And then plateaus afterwards. Rich people say they are more satisfied but they won’t necessarily be in a better mood day to day.” (The $75,000 per capita income came from a famous 2010 Princeton study conducted by Angus Deaton and psychologist Daniel Kahneman. Deaton told the Wall St Journal, “As an economist, I tend to think money is good for you, and am pleased to find some evidence for that.”)

Some are sceptical of such studies, questioning their worth. The Oxford University Marxist Terry Eagleton in a UK Guardian newspaper review of ‘The Happiness Industry” by William Davies writes: “Given their pathologically upbeat culture, Americans tend to downplay their dejectedness, while the French, with their suspicion that happiness is unsophisticated, are more likely to under-report it. It is the kind of thing that cavorts at the end of piers wearing a striped jacket and red plastic nose.”

One of the arguments levelled against surveys and measurements of happiness is that what someone says about their wellbeing is an entirely subjective thing. Put bluntly people might not know when they are happy or when they aren’t. Or worse they don’t really know what the word means. How does one measure such things objectively? And anyway aren’t we all a bit overly concerned about emotion when rational/critical thought is more important?

Generally, many on the Left are deeply suspicious of the interest that business is now taking in happiness. They recoil in horror when they hear of calls made for publicly traded companies to include the wellbeing figures for their staff each year in the annual report. On page 1. For it remains true that the first thing we notice in global happiness surveys is that people working blue-collar as opposed to normally better paid white-collar jobs report lower levels of overall happiness in every region around the world.

Some have observed that those nations which rank high in the happiness tables have lower levels of income inequality and higher levels of social capital. (China take note.) Research by Selin Kesebir, assistant professor of Organisational Behaviour at LBS, suggests that if governments wish to increase GDP to better the lives of their citizens, then growing wealth should be distributed evenly. “For a nation’s life satisfaction to increase, producing more wealth is not sufficient,” said Dr Kesebir and her colleague Shigehiro Oishi from the University of Virginia. “The fair distribution of the added wealth may critically determine whether life satisfaction will rise on the whole. On the basis of our findings, it is safe to say that if income and happiness go together it is when income is distributed evenly. Even growth is happy growth, and uneven growth is unhappy growth.”

Alex Edmans of LBS is also interested in this topic but comes from a different angle: “I certainly think that an emphasis on pay ratios can be quite reductive. It reduces people to simply a salary and is, in itself, dehumanising. Work is more than the salary. In the same way that the performance of a company should not be reduced to its quarterly financials, there is more to a job than the numbers. Even blue-collar jobs can be purposeful which leads to increased well being.”

Edmans encourages focus on corporate purpose and has written that “It feels counter-intuitive but it’s possible that by not focussing solely on the profit you may end up being more profitable.” He cites the drawbacks of a football manager who pays individual players according to the number of goals they score – “they may shoot on sight, leading to fewer goals being scored” – whereas “total football” involves all eleven players working together to win. And get very happy as a result.

An important buzzword in recent years in the area of human resources and organisational behaviour has been “engagement.” Disengaged workers are bad news, as many studies have shown. Not only do more engaged individuals in companies lead to a 22% rise in productivity but they are off sick less and don’t leave organisations. However, the relationship between happiness and engagement is complex and subtle. An engaged worker might not be happy and a happy worker might well not be engaged.  A person can be happy generally in life but not necessarily in their job.

Indeed, many have a nuanced attitude towards work and the role it plays in making them happy. In the UK two of the more sceptical mantras of modern times capture the anti-work ethos. The first is “I work to live, I don’t live to work”.  The second is “Nobody ever says on their deathbed they wish they’d spent more time in the office.”

The relationship between work and happiness is complex. Work takes up more waking hours than any other activity. Most of us would probably work whether we needed the money or not. What else would we get up to? And it’s probably true that there are plenty who might even spend more time at work if they were being more honest. Many individuals get more out of our work than other aspects of their lives despite it being not socially acceptable to say so. However, few come out and pronounce that they find work that was interesting enough for them to want to spend more time in the office. A survey of retired people once posed the question: “What do you most regret in your life?” Four out of five retirees picked the response “Staying in a job I did not like”. The missed opportunity of the jobs that got away. Not all of us are sufficiently fortunate to choose what we do for a living.

For Alex Edmans, the move from being an investment banker to an academic teaching students has been a happy one, despite almost certainly involving a salary drop. “I love the freedom teaching brings. I can choose what I work on. But, then again, I wasn’t an unhappy banker, either.” This happiness appears to be infectious – Edmans won the LBS MBA Class of 2016 teaching award for the highest-rated professor school-wide (voted by the first-year class) and the Best Teacher: MBA 2016 award (voted by the graduating class).

To find out more about our Healthy Work thinking and how we can help your organisation please contact becky.holloway@jerichochambers.com 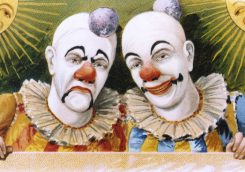