Ahead of tomorrows #JerichoConversation Business Life After the Virus: Investing in Society we are pleased to share some excerpts from our speaker, John Kay’s forthcoming book Greed is Dead (co-authored with Paul Collier) which will be published by Allen Lane at the end of July this year.

If you haven’t already please register here to join us.

How could a CEO get such recalcitrant material as Economic Man to work in the interest of the organization? More economic research – supported with more Nobel Prizes – developed principal-agent theory as the solution: the CEO needed to set up a monitoring system for scrutinizing the behaviour of workers, and link it to incentives and penalties that would induce them to do what was wanted. Monitored incentives would entrap employees in a web of scrutiny linked to rewards and penalties.

The financial sector, unsurprisingly, was the most faithful adherent of this ‘solution’ to the employers’ problem; humble bank tellers were given targets for selling products neither they nor their customers understood; and even now, the bonus season is the high point of the investment banker’s year. Law and accountancy abandoned their stuffy professional ethos in search of revenue generation. As an approximate guide, one corporate CEO was worth three top lawyers, seven top accountants, and around a hundred and fifty ordinary wage-earners. Acknowledging what they thought had shaped hunter-gatherer societies, a widely adopted payment system is known as ‘eat what you kill’. But the advocates of ‘eat what you kill’ misunderstood those pressures. Real hunter-gatherer societies had learned that by acting cooperatively not only could they reduce the feast-famine of individual hunting by sharing the catch, but that they also caught more. Rousseau explained why in the time of Adam Smith. Hunters do not ‘eat what they kill’, because as individual hunters they would only catch hares; by hunting together they can catch stags.[1] So they share their catch, and their social rules confer economic advantage on the group.

How did people reconcile the reality that large business organizations play a central role in modern life with that shrivelled view of society as a forum for transactions between autonomous individuals? In two – largely incompatible – ways. One was to individualize even the largest businesses. Whereas the great pre-war business leaders – such as Alfred Sloan of General Motors or Harry McGowan of ICI – had not been public figures, those of the late twentieth century – Bill Gates and Jack Welch, Lee Iacocca and Richard Branson – would be media stars: in the pages of the business press, GE was Welch, Microsoft was Gates.

The other approach was to look through the corporation in a reductionist style: the corporation was merely a cypher for the interests of individuals. At a popular level, the business was simply an agency for the individual interests of its shareholders and bore no moral load – ‘the social responsibility of business is to maximize its profits’, to quote the notorious words of Milton Friedman.[2] At a more academic level, the firm was reduced to a ‘nexus of contracts’: merely a convenient legal fiction to accommodate a set of private agreements between individual investors, employees, suppliers and customers.

Market fundamentalism predicted that the maximization of shareholder value would be good for society – that only as long as firms strain to maximize profits will the economy be socially efficient. And it is, lest we forget, good for shareholders. Yet it was not good for the person in day-to-day charge of the whole operation – the self-interested CEO. Since the CEO was no more altruistically interested in the business than his workforce, shareholders needed some means of motivating him.

The solution was to incentivize the CEO by the further application of principal-agent theory. Since there was little scope to monitor the details of how the CEO worked, rewards for the CEO might be linked to the value the firm would create for shareholders under his management through the award of share options. Only this would drive the CEO to become totally devoted to the share price. This would set the scene for the explosive growth of CEO remuneration in the next three decades, cheered on by an army of ‘remuneration consultants’ who devised LTIPs (long-term incentive plans). The ‘long term’ might extend for as much as three years.

The market and the community

In Chapter 8 we referred to various modern communitarian philosophers such as Etzioni and MacIntyre, Sandel and Walzer. One thing these writers have in common, regardless of their manifold differences, is a fear that community is being eroded by the practices of the market and the values, or lack of them, of modern business. Walzer’s best-known work is Spheres of Justice, which declares a need to ringfence the moral and political world from the influence of economics. Sandel’s widely acclaimed What Money Can’t Buy – The Moral Limits of Markets attempts to identify those areas of life which must be kept free from market forces. Macpherson coined the term ‘possessive individualism’ and wrote an extended essay critical of the moral philosophy implicit in the work of Milton Friedman. And of course Aristotle, while admiring of productive activity, had despised the middle man. It would have been hard for him to imagine trade in securitized financial products, but it is not hard to imagine what he would have thought about it if he had.

For ideas to matter, they must find practical application. The communitarian philosophers cannot be blamed for dismissing modern economics: the economics of individualism is indeed repellent. But in supposing an intrinsic tension between the community and the economy, they marginalized the ideas in which they believe. The notion that community and market are antithetical is a recent one. Historically, the opposite was true.

The agora in ancient Greece and the forum in ancient Rome were both marketplaces and meeting places. In classical Greek, the words for ‘to shop’ and ‘to speak in public’ are similar, derivations of the same root. And when one of us recently asked a taxi driver to take us to the centre of the small capital of his poor country, he deposited us in a busy location and pointed. ‘There is the old market, straight ahead,’ he said; and ‘There is the new market, to the right.’ For most of history, and in less-developed countries today, the marketplace was not the enemy of community; the marketplace was where community came to life. Indeed, the market is the process that replaces the isolation of self-sufficiency with the communalism of interdependence. The institution of the market is the essential first step in the journey out of mass poverty.

And even today if you ask a taxi driver to take you to the centre of an English town, he will drive you to the high street and you will see the familiar branches of Boots, W. H. Smith and Starbucks. You will find a plethora of commentary on the role of the hollowing-out of the high street and its unfortunate impact on the community.

When Adam Smith wrote that ‘It is not from the benevolence of the butcher, the brewer, or the baker that we expect our dinner, but from their regard to their own interest,’ he was not describing Amalgamated Meats plc, United Beers Ltd, or the International Bread Corporation (and certainly not the National Bread Service).[3] He was describing the artisan who ran a local shop and knew most of his customers, with whom he enjoyed a personal relationship. ‘The mutton is very good today, Mrs Smith,’ the butcher would advise.

Only in the following century, as economies of scale and the ambitions of tycoons and financiers established the large corporations which came to dominate twentieth-century business, did anonymous transactions generally displace exchanges which were embedded in continuing relationships. It was, and is, that change which justified the concern that markets and community were antithetical.

But from the beginnings of modern business, it was realized that consumers would be reluctant to trade anonymously. When the local shop began to trade in industrially manufactured products, the makers of these products began to engage in branding and advertising; by spending money promoting the product, they sought to demonstrate their permanence and establish a continuing relationship. And as goods became more complex, anonymity became harder and harder to maintain. Very few of the exchanges we make as consumers in a modern economy, and almost none of the commercial exchanges, are trades between anonymous buyers and anonymous sellers of homogeneous products. Many devices have emerged to replace the advice and gossip in the butcher’s shop, but even among large multinational corporations personal relationships continue to matter; the business-class cabins of aircraft are filled with executives for whom video conferencing is still inferior to a handshake and a shared meal. (As we write, during the coronavirus crisis, these cabins are empty – we will learn how quickly the cabins refill and the Zoom screens go blank when the crisis is over.)

The internet and other aspects of globalization have made it possible for every potential seller to contact every potential buyer, and vice versa. But at the same time devices have emerged to make it possible to trade confidently with someone we do not know. Airbnb and Uber enable us to stay safely in a stranger’s home and ride safely in a stranger’s car. And they deliver a profile of Bill the host or Rashid the driver. The community of Amazon bookbuyers rates every book on its site, eBay users rank its sellers, and TripAdvisor assembles opinions on hotels, restaurants and attractions. While the butcher learned of the preferences of Mrs Smith, and Adam, from her regular shopping patterns, so the supermarket derives the same information from your loyalty card. And just as the butcher would have made recommendations to Mrs Smith derived from his understanding of these preferences, Google and Amazon anticipate the new products we might want to buy. What customers fear is not that online sellers and Google and Facebook know too little about us, but that they know too much.

The need for community is fundamental to both social and economic life, and as technology and social change have diminished the effectiveness of some forms of community, they have simultaneously and necessarily increased the opportunities for others. Markets are not intrinsically inimical to community; indeed, effective markets today are, as they always have been, embedded in communities.

The first decade of the present century offered a forceful demonstration of this enduring truth. Lending transactions were traditionally based on personal relationships. J. P. Morgan, no enemy of market fundamentalism, observed that the basis of lending was character and that ‘A man I do not trust could not get money from me on all the bonds in Christendom.’[4] A bank loan required a grilling from an unsympathetic branch manager, who got to know his business customers and many of his personal ones through the golf club; a mortgage was grudgingly offered to customers who had built up savings and necessitated a visit to the building-society office. In the 1980s this community-based approach was largely replaced by automated credit-scoring of loans and their resale in packages through securitization. The 2008 global financial crisis was the direct result.

Friedman, M. ‘The Social Responsibility of Business is to Increase Its Profits’, The New York Times Magazine (13 Sept. 1970)

Rousseau, J. A Discourse upon the Origin and Foundation of the Inequality among Mankind (1761)

Smith, A. An Inquiry into the Nature and Causes of the Wealth of Nations (1776) 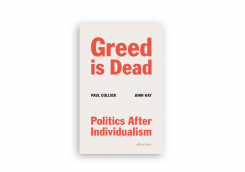