Fifty years ago society’s reverence for the professional classes was almost a given, but those days are gone. Restrictive practices and a reluctance to accept reform have contributed to a loss of public trust and respect. Lawyers and doctors don’t stand on the pedestal they once did. When companies such as BHS and Carillion go down, for example, blame is often placed on accountants – professional accreditations notwithstanding.

That professions have moved with the times is not in any doubt, however, in their embrace of the market (along with its often high rewards), have the professions now opened themselves to criticism previously levelled at mere business people?

Made in association with Stifel, this podcast by Matthew Gwyther of Jericho Chambers is the latest in series of pieces on The Future of the Professions. The 30 minute programme looks particularly at the role of top law firms who are currently riding the crest of a Magic Circle fee-wave and margins that mere mortals can only dream of. But is this overt success hiding a real fragility?

* The war for top talent among lawyers

* The commoditisation of entry positions, and the financial implications of automation and AI

To find out more about our work in this space, or to join the discussion, please get in touch. 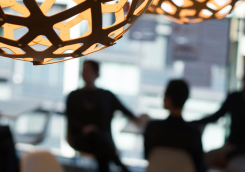