To win back a fractious public currently feeling betrayed by broken promises of ‘control’, politicians must admit that power has to be shared – including through a better electoral system.

The so-called return to two party politics at the last election, when the Tories and Labour scooped up over 80% of the votes between them, was always a retro-blip not the return of the old binary order. Brexit and much more are driving fissures throughout our very tired party political system. We know that Brexit voters, disillusioned with the Chequers Deal, have started to ebb back to UKIP. At the weekend we learned from the Sunday Times YouGov poll that 38% would vote for a new right-wing party committed to Brexit, while 24% are willing to back an anti-immigration, anti Islam Party. Meanwhile Vince Cable does or doesn’t hold talks on a new centrist party that looks like its coming down the track with or without him. Labour is split asunder by huge political and cultural divisions. In Scotland the SNP start to ride a new wave of popularity over Brexit fears. Whatever this is, it ain’t old two-party politics.

But a myriad actual and possible parties, that reflect the complex reality of the world we live in, are rendered impotent or are left still born by a political and democratic system built not for these many parties but just for two. The pressure for change will grow inexorably but so too will the politicians grip on their waning hold on power. Something will have to give!

This is an extract from an article originally published on Open Democracy. The full article is available to read here. 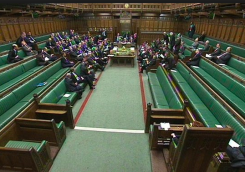