Danny Kruger’s New Social Covenant Unit wants a full-scale rethink of the welfare state. In this piece, adapted from its recently published manifesto, he calls for the empowerment of local institutions, vernacular and local services run by and for local people and quality in abundance. Could this be a call to arms for Primary Care and GPs to step up and take their vital role in the surgeries of the future?

Public services – including health services – are too centralised and individualised, and ‘Social solutions’ are growing through the cracks in the Attlee settlement.

We need a place-based model of public services which draws on the huge resources of local communities. We also need a more ‘social’ public sector. Currently, for all the enormous public benefit they deliver, public services are deeply wasteful and deeply disempowering of individuals and families, of the staff who work in them and of the communities they serve. This is because they are too centralised, too siloed, too rationed, too individualised, and too reactive.

Public services are too centralised. The structures of the welfare state remain largely those created by Clement Attlee’s postwar government. This was an era of professional authority when the men in bowler hats or white coats knew best, and the recipients of services were expected to be grateful for what they got. And so we have large Whitehall departments responsible for organising comprehensive, universal services, meeting all the needs of all the people.

Public services are too siloed. These departments meet at the top, via their ministers, round the Cabinet table. But on the ground, where it matters, they belong to different fiefs, accountable upwards through a dense bureaucracy and unable to collaborate or pool resources.

Public services are too rationed. The system is designed to deliver ‘equity in scarcity’: a fair distribution of limited resources. The result is a great bureaucracy which sucks up resources and responsibility from the front-line where resources and responsibility are most needed. In recent decades we have clad Attlee’s aging structures in the gleaming veneer of private sector expertise and agility. The doctrine of ‘New Public Management’ sought to modernise the public sector through quasi-markets, purchaser-provider splits, unit costs and competition. Yet the basic model remains: top-down silos, ‘delivering’ ‘services’ (command and control in the language of the market) to a passive population.

Public services are too individualised. They are designed for individual recipients, ‘service users’ or ‘customers’ in the bloodless phrases of the modern public sector. Little thought is given to the wider family and community context in which the individual lives, and which is probably a far greater influence on their wellbeing than whatever tightly rationed ‘service’ they receive from the government.

Public services are too reactive. In the early days of the welfare state ‘needs’ were generally critical and acute: the cataclysms of sudden, usually short-lived ill-health or unemployment. Systems are designed to respond to things having gone wrong, rather than working to prevent them from going wrong. Resources and status concentrate on acute remedial services.

The nature of demand has changed fundamentally over the decades since Attlee. Rather than sharp swift periods of ill-health,
many people experience long-term health conditions, and often they, not doctors, have the best ideas of the treatment and care they need. Rather than short gaps of unemployment, we have generational joblessness for some, and for others, a precarious life juggling earned income, in-work benefits and welfare.

“The pandemic and lockdown showed the power of neighbourhoods to self-organise and arrange mutual support.”

The supply of public services – the way we meet the needs of the population – is changing too. A range of organic ‘social solutions’ are growing through the cracks in the structures of the Attlee settlement. Social prescribing (sending people to a gardening club or a choir rather than giving them pills, for instance) is being adopted in the NHS. The work of charities and faith groups in welfare, criminal justice and family support is being recognised and expanded. In education, free schools set up by groups of teachers or parents are challenging the monopoly of government, and the growing home-school movement demonstrates the ability of families and communities to educate children outside the school system altogether.

The pandemic and lockdown showed the power of neighbourhoods to self-organise and arrange mutual support. As with the examples above, this is in a sense a return to a more old-fashioned model of community self-help. Despite the bureaucracies, nature finds a way – especially when technology helps.

We need a successor to New Public Management and this time we need to transform, not just modernise and part-privatise, the Attlee-era public sector. At the heart of the new model is the motto that delivered Brexit: take back control. We need to dismantle the great bureaucracies of the welfare state – the postwar concrete, the steel and glass of New Public Management, and make instead local institutions of local stone, albeit properly wired together by efficient digital and data systems. We need ‘vernacular’ local services run by and for local people. These will be just as comprehensive and universal, just as well funded and well regulated, but their organising principle will be different.

The new public service model is organised around places, not government departments, and it is accountable outwards and downwards to local partners and communities, not upwards to Whitehall. Most of all its purpose is to prevent social challenges as well treating them. The ‘place’ focus will allow pooling of budgets and strategies across Whitehall silos and allow the resulting savings to be reinvested in the parts of the local ecosystem that would benefit most.

As this suggests, policy should deliberately seek to reduce the demand for expensive acute public services rather than simply increasing or cutting (depending on the times and the party in government) the supply of them.
Rather than a model of ‘equity in scarcity’ we should aim for ‘quality in abundance’. For despite the dire position of the public finances, we are not short of the resources we need. There are enough people to teach our children, care for our sick and elderly, help our addicts and homeless. They are not all in the formal public sector or formally qualified. But there are millions of people available to support the professionals.

As machines take over the manual and clerical jobs, human beings will be left with the things that humans are best at – and this includes looking after other people. The current ‘equity in scarcity’ model is absurdly straitened: 30 children to one teacher; 100 prisoners to one officer; ten elderly people to one care worker. These are shameful ratios. Instead, we should be flooding the system with personnel, trained and managed as necessary but qualified most of all in common sense, duty and compassion – qualified in the virtues. 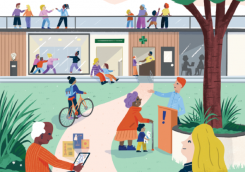