The latest crisis engulfing British politics is a metaphor for our fragile times. Britain’s stagnant political leadership is another morbid symptom of the 21st-century Gramscian interregnum, about which we have written before. The class of 2017 is not fit to govern.

A mortally-wounded Prime Minister, woefully lacking vision and courage, languishes on permanent life-support— “just about managing”, placing political self-interest ahead of the public good. No sense of duty or collective responsibility, nor accountability to a flourishing polis. No leadership.

Citizens are left with little option but to absorb and share the pain that comes with the demise of politics as we know it. The people are innocent participants in a stagnant economy and democracy that no longer serves them fairly. Rising levels of socio-economic inequality; hospitals and housing in crisis; crumbling infrastructure; an eviscerated public sector; a bloated and unrepresentative parliament; tech behemoths undermining democratic institutions and socialising hate, while masquerading as innocent “platforms”; feral media; experts under attack; and leaders simply not good for purpose — increasingly exposed for their feeble actions, as well as their shallow words.

This is not an attack on a bankrupt Conservative government. The opposition parties would likely prove no better. Their own promises of “renewal” are equally hollow — lacking in imagination and fresh thinking: a return to a failed 20th-century settlement; mostly pale, male and stale leaders — tired dogma and dogmatists dressed up in pseudo-Glastonbury garb. None of us should be seduced by an alternative form of incrementalism. It is dangerous to conflate “opposition” with “progress”. For Britain, Venezuela cannot be the answer.

The failures are systemic, not party-political — (at least) half-a-century in the making: an inadequate response to the post-industrial age and the decreasing relevance of national and global institutions, mapped onto a world of technology and networks. Many of us have been complicit in the manufacture of this decline: those of us in leadership positions, in both politics and business, held the keys to the candy shop, while looters gorged themselves inside. Too often, we were wilfully blind. There is surely a better way.

“We need coalitions and social movements, based on new models of trustworthiness and accountability, ceding control and embracing dissent. A new, positive discourse is required.”

Where do we start? What do we do? Take your pick but, to quote author and Jericho colleague Margaret Heffernan, let’s all Just Do Something. Purpose means nothing unless you actually do something.

We must not give up on hope. Brave thinking — imaginative leaps — are required to rescue us from failed incrementalism: from defining the real responsibilities of the new global monopolies, to a fundamental overhaul of the constitution and its consequences. Participation and equal voice should be celebrated on un-precedented levels — in the workplace as well as the voting booths. This is why we have argued elsewhere for coalitions and social movements, based on new models of trustworthiness and accountability, ceding control and embracing dissent. Tribalism is the enemy of an open society. A new, positive discourse is required.

The late philosopher Tony Judt questioned whether we live in a post-ideological or post-ethical age. “We have lost touch”, Judt wrote, “with the old questions that have defined politics since the Greeks. Is it good? Is it just? Is it fair? Is it right? Will it help bring about a better society? A better world? The social contract that defined post-war life in Europe and America – the guarantee of security, stability and fairness – is no longer assured; in fact, it’s no longer part of the collective conversation”.

Jericho was created four years ago as part think-tank, part consultancy, with a social purpose at its heart — to work together for the common good and a better society. We wanted to re-start the collective conversation and to work with clients, through business, on the big societal issues, to address fairness and equality, as well as stability and security. A new social compact is desperately needed between business, politics and society and imaginative leaps are required to take us there. This runs to the heart of Jericho’s recent programmes on responsible tax and the human future of work; transport, housing and the built environment; a vibrant digital economy and more. We know we are not alone in our appetite for change.

This latest collection of essays from a number of Jericho partners offers answers to some of the challenges we face: from the lack of empathy within Artificial Intelligence to the evils of corporate benchmarking; from wholesale reform of media, to the need for a positive, globalised mindset. Some focus on business, others on politics. But all are rooted in a shared sense of purpose and a commitment to the common good. The essays are intended to provide, if nothing else, an enjoyable read while we endure the darkened state we’re in.

Robert Phillips is the co-founder of Jericho Chambers. He is the author of Trust Me, PR is Dead, and a Visiting Professor at Cass Business School, University of London. Robert’s client advisory work focuses on the relationship between communications, leadership and trust. 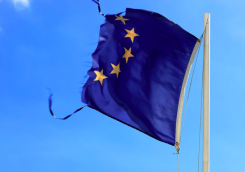