Why we might not be as divided as we think we are. Ben Page gives us reasons to be optimistic . 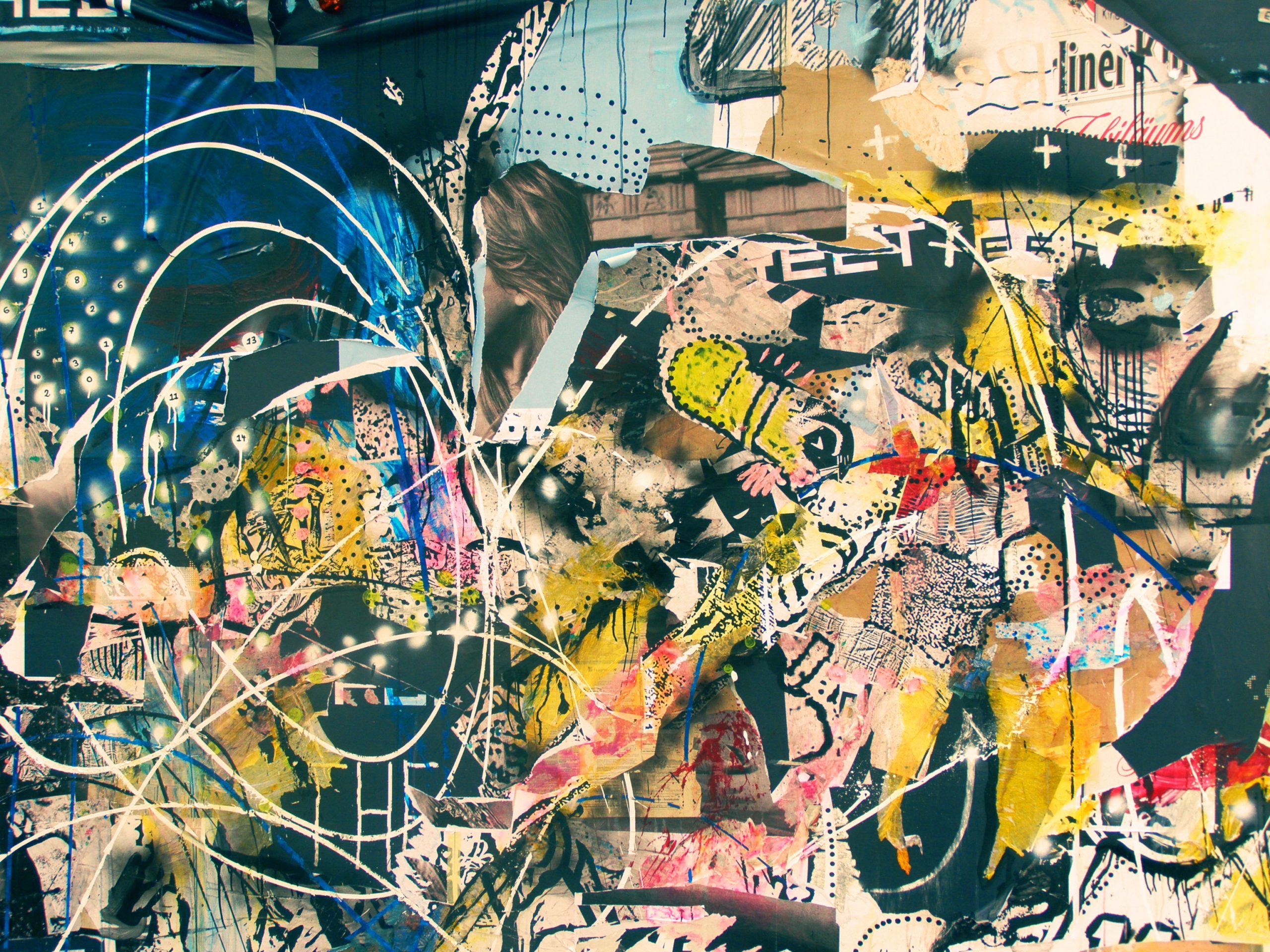 If the 1990s and early part of the 21st century seemed a happy time for social democracy and liberal values, the post-2008 Crash world seems very different. One of the biggest shifts in my 32 years at Ipsos MORI has been the loss of the future in Western Europe and North America. Whereas in 2003, only 12% of the British thought that their children would be worse off than them, now this has risen to 45%. This is a massive change, similar to the change in social attitudes towards LGBT people that has seen a position where from being illegal when I was born in 1965, now 66% say that it would be fine if Prince Harry had married a man rather than Meghan Markle. We are in a completely different place. 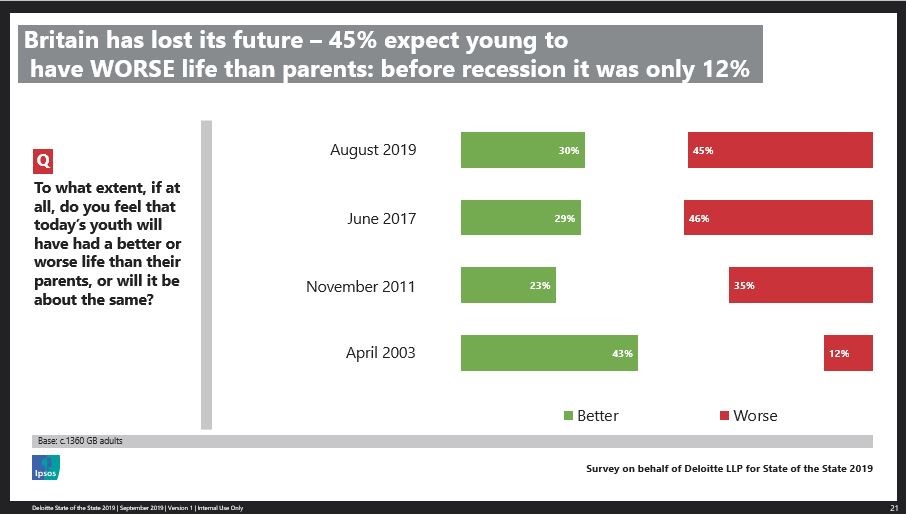 When you look at how the public in Britain and across the West are reacting to a long freeze in real wages and disposable incomes, coupled with higher immigration post 2000, and austerity in public spending post the crash, you see widespread anger at the “elites” over the promised future that is failing to materialise. We see rising nostalgia for a remembered past, particularly among those feeling “left behind”.

The average global citizen feels left out of the “normal order” of life in his/ her country:

These feelings are widespread, and in fact, disaffection is most widespread in Latin America and Eastern Europe – hence massive violent recent protests in Chile.

In Britain we are not immune, but in fact tend to be quite mid table – so 70% say the system is rigged for the rich and powerful, but even in Sweden, a generally happy country and relatively less unequal than Britain or America, still has 56% say the “system is rigged”. The British are in fact less keen on “a strong leader” than France, or many other countries. In terms of our attitudes towards globalisation, we fare more positive than say the French or Italians – in Britain by two to one we say it benefits us as a country, with views similar to those of Canada and Australia.

“The language used by politicians over Brexit, talking of “traitors” and “saboteurs”, or “citizens of nowhere” seems dramatically misplaced.”

Nevertheless, although we may be rather “moderate” globally on many issues, and not polarising to extremes, a huge 85% of Britons think the country is divided, nine points higher than the global average across 27 countries. Yet at a local level, the proportion who agree that people in their neighbourhood pull together to improve things has changed little in recent times. So too has the sense that people from different backgrounds get along well together. In fact, both Remain and Leave voters are equally attached to their “local area”, and to “Great Britain”. The language used by politicians over Brexit, talking of “traitors” and “saboteurs”, or “citizens of nowhere” seems dramatically misplaced.

But more populist politics means we feel we are becoming more divided. Seventy-three per cent think Britain is more divided than ten years ago; this time, 14 points higher than the global average. Britain is downbeat and critical. Some 78% per cent think the country is on the wrong track, the most pessimistic country we measured, and a record 81% were dissatisfied with the government this year – with frustrations over Brexit producing a record 37% who said our system of government “needs a great deal of improvement”.

Often the challenge seems to be how we think we are, rather than how we actually are. The gap between perceived and reported happiness in Britain, as elsewhere, is huge (we think we are gloomier than we actually are). Our studies at Ipsos MORI on the gap between perceptions and reality paint a picture of denial and self-delusion, combined with a dangerous focus on eye-catching scare stories. We all have an innate human tendency to think things are worse now than in the past, even when they are virtually unchanged. The past is attractive especially when the present looks uncertain but, for example, there was a serious concern in the 1970s about Britain being “ungovernable” and rife with division.

The challenge is that nightly debates about Brexit, and the cultural divides behind it, and inflamed debates on social media work to remind us daily of divisions.

A corrective is that Britons are, by a margin of six to one, more likely to think that mixing with people from other backgrounds, cultures or points of view has more positive impacts than negative ones.

More favour the country taking further steps to open itself up to today’s world, rather than a protectionist approach to close ourselves off. And 70% think that people across the world have more in common than things that divide them. Our challenge, when we are split over issues like Europe, is that mixing with people and finding commonalities despite differences is harder in a “more filtered” online world we spend a lot of time in.

We are deluded about this too: in Britain, 70% think other people live in their own internet bubble, but only 30% think that they themselves do.

Today, Brexit – years in the making – is media shorthand for the division. It can seem like it has held up a mirror to our malaise, making it even harder to avoid the cultural equivalent of a doom loop, where division breeds division and so on and so on, but sometimes, disconnecting from the media cycle, Twitter, Facebook and just talking to people can be a healthy corrective that Britain isn’t America. Ultimately there is more than unites us than divides us – even if that is not the overarching media narrative.

Ben Page is Chief Executive of Ipsos MORI. He joined MORI in 1987 after graduating from Oxford University in 1986, and was one of the leaders of its first management buyout in 2000. A frequent writer and speaker on trends, leadership and performance management, he has directed thousands of surveys examining consumer trends and citizen behaviour. From 1987-1992 Ben worked in our private sector business on corporate reputation and consumer research, working for companies like Shell, BAE Systems, Sky TV and IBM. Since 1992 he has worked closely with both Conservative and Labour ministers and senior policy makers across government, leading on work for Downing Street, the Cabinet Office, the Home Office and the Department of Health, as well as a wide range of local authorities and NHS Trusts. He became Chief Executive of Ipsos in the UK and Ireland in 2009. 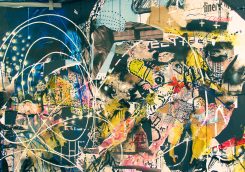