According to the Automobile Association around 150,000 drivers annually fill up their tanks with the wrong fuel.

I was one of those last week; 60 litres of petrol into a diesel car. Only when it spluttered to a halt did I realise the stupid mistake. The nice man who drained the petrol said I was lucky – if I’d filled a petrol car with diesel, then the engine would have been much more damaged. I couldn’t help thinking that I should have bought an all-electric car. Plug in and go! And help the climate, too.

Except – of course – it wouldn’t be helping the climate all that much. After all, electricity generation remains a fairly ‘dirty’ business. According to the World Coal Association, the UK was the world’s seventh-biggest coal importer in 2013. Energy UK, the trade association for the country’s energy industry, says that most of the UK’s electricity generation comes from burning fossil fuels, which in 2010 was primarily natural gas (47%) and coal (28%). The proportions will not have altered much in five years except that as coal has become cheaper, it may in fact be more used today; in 2010 just 7% of our electricity derived from renewable sources and 16% from nuclear reactors. The UK has been set by the EU a target of generating 30% of its electricity from renewables by 2020. That’s going to be tough to achieve.

The electric car is an old technology. The first were made in the 1880s but cheap oil quickly drove them off the road. Car technology today is moving ahead in fits and starts, under pressure of high oil prices (at least until recently) and increasing anxiety over carbon emissions.

There have been steps in the right direction. We are all familiar with the Toyota Prius, a petrol-electricity hybrid, which first went on sale in 1997; around five million Prius’s have now been bought around the world, which sounds impressive but is actually less than 1% of the world’s total car pool. The total amount of CO2 pumped into the atmosphere each year by 1.2 billion cars is more than 1.7 billion tonnes – equivalent to burning all the coal in a train that stretches around the world 12 times. All-electric cars – with no nasty exhaust pipe emissions – have begun to make some inroads, but their high price (even with sporadically applied government subsidies) and relatively short range – generally less than 50 miles – has understandably inhibited consumer demand. And their heavy batteries with a relatively short life remain troubling.

It’s difficult to avoid the conclusion that buying an all-electric car remains a kind of consumer fashion statement, a declaration of intent to help the wheezing planet rather than a really useful combatant in the fight against global warming. 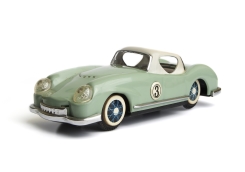