It seems like only last year that the dark valleys of the media rang with echoes of voices from the moral high ground enumerating the catalogue of causes for the phone-hacking scandal. Oh hang on, it was only last year. The tedium of the sanctimony with which all those wiseacres admonished us makes it feel longer ago – like I was at school.

Allegedly, it was a decline in the ethical standards of journalism, as if there had ever been a golden era in Fleet Street when a loveable rogue reporter had been held at the elbow by a Cockney-sparrer colleague (‘eart of gold) and told “yer can’t do that, ‘arry, it ain’t right ‘n’ proper” (copyright Ealing Studios).

Or it reflected the nadir of the post-modern decline in societal moral standards (when any lovable rogue…take in above). Or it was about the big money following the big stories. Or it was the inevitable consequence of a free market when it’s both highly competitive and shrinking fast – standards get thrown out like ballast from a plummeting hot-air balloon.

There may be virtue in all these ascriptions. But I’d like to posit another cause and it’s very simple: rot sets in when something has died. We’re accustomed to very modern usages of the word corruption. We speak of software being corrupted by a virus. And journalists – irony dies here – investigate corruption in high places.

But the more archaic usage of ‘corruption’ was all about decay and putrefaction. When Chaucer’s Pardoner speaks of “dung and corruption”, he was talking literally and naturally about what humans do, but not their illicit deeds. When Shakespeare has Hamlet tell his mother that her bed-sheets are “stewed in corruption”, he doesn’t just mean that she’s late with laundry day (and therefore a slut, geddit?) but that his father died between them.

We can lift this etymology into our own times. So newspaper journalists have been corrupted because the internet killed them. The expenses scandal of 2008 emerged because MPs were the maggots and flies on the corpse of parliamentary democracy. Bankers? It’s not called late capitalism for nothing. Celebrity sexual-assault scandals didn’t arise so much from the demise of morality as the death of the rapacious free-love mores of the 60s and 70s. There is a direct continuum between the death of the High Street butcher and supermarkets mass-selling horsemeat in place of beef.

My point is that something has to die for it to become corrupt. Or something at its heart has to have expired. I daresay m’learned colleague Robert Phillips might have something to say about public relations in this regard.

We’re getting used to smelling it when it happens. There’s something a bit stinky about big-money sport at the moment. You might need smelling salts if you visit the House of Lords. The Church is more than a bit whiffy too. Any cook will tell you if it smells off, then it is off.

Corruption, in the ancient sense, is a natural function of life. Just so long as we recognise the dead for what they are. Just so long as something fresh and transformative grows from it. Our old mate St Paul nailed it when he spoke of new life replacing the crappy old stuff a couple of thousand years ago: “It is sown in corruption; it is raised in incorruption.” Amen to that. 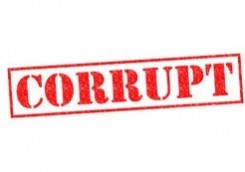