Jules outline whys Bristol is the hub of all things new economy and details the upcoming Bristol New Economy Summit in the Autumn.

I’m a big fan of Bristol, having lived there on an off for many years and now working with a number of new economy initiatives based there. As I follow the ‘new economy’ space for the Real Economy Lab, based just outside Bristol, I spend quite a lot of time exploring the explosion of new economy initiatives around the world and I would say Bristol is one the UK’s, if not the world’s, hot spots on ‘new economy’ innovation. It’s no doubt why Bristol was voted Green Capital of the EU for 2015.

Many of us would agree that the way we run the economy today is madness, endless growth despoiling our only planet and our system seemingly intent on privatising profits and socialising risks. It’s a system that’s been described as ‘unstable, unsustainable, unfair and unhappy’.

Consensus and dissent is on this is growing. The good news is that many people are already exploring alternative ways of living and organising that offer other possible futures.

If you want to learn more about what a new economy might look like, and why we need one, check out some of our Real Economy Lab blogs like this one. In a nutshell, to me a ‘new economy’ will need to be one that does not rely on growth, probably won’t be describable as capitalism, is based on values and principles of justice, environmental sustainability and regeneration, increased equality and economic opportunity, increased health and wellbeing, enhanced democratic participation, culture of cooperative relations.

And much of this will need to happen at the grassroots, driven by you and me, the world’s citizens, where we live. In places just like Bristol but also Bangalore, Bahrain and Barcelona (ok yes and places not starting with b).

I can’t think of many places where there is such a vibrant community of people doing so much to explore and bring to life a new economy based on wellbeing not wealth, community not competition.

That’s one of the main reasons why a group of us are running the Bristol New Economy Summit on 12-13 October, as part of Bristol’s Green Capital 2015 celebrations. We’ll be joined at the summit by experts and practitioners from Bristol, the UK and around the world for two days of learning, participating and connecting. We will look at what could the future look like for money, business, ownership, and cities through examples from Bristol an around the world.

The event is designed for anyone interested in how we move from where we towards a fair and planetary boundaried economy.

You can find further information and ticket bookings here 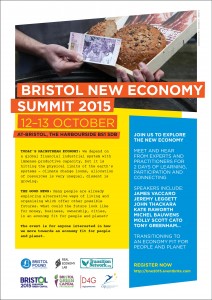