We are looking forward to hosting the twelfth and final event in the current Jericho Conversations series – Business Life After the Virus: The Imaginative State.

If you have not yet registered to join, you can do so now: 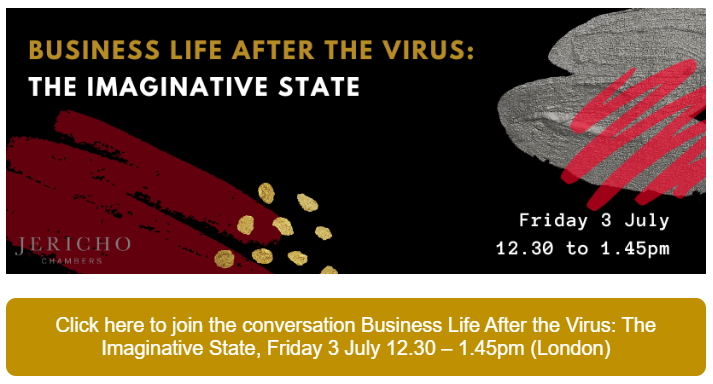 Jericho Conversations is a project born out of a mix of curiosity and determination at the start of lockdown; designed to keep our own communities engaged and thinking about “what comes next?” for business after the crisis passes. Back in early April, we could not have predicted the appetite, enthusiasm or thirst for change – to build back better.

By July 3rd, across twelve sessions, over one thousand people will have been involved in the project: twelve weighty provocateurs; 40 enthusiastic panellists; and an audience that reflects the mix of the Jericho community: senior business leaders; politicians and policymakers; academics and experts; NGOs and campaigners; media and the commentariat. The spirit has been almost wholly optimistic but always tinged with reality.

Renewal is possible but it won’t be easy. A slide back to Business As Usual – which really wasn’t working – is a distinct possibility: no more so than when it comes to the shared ambition of a greener future. The Jericho community, 4,500 strong, recognises that there is a real danger that we will tut-tut our way back into stasis.

“The need-to-have is likely to be prioritised over the nice-to-have.”

We have covered a broad range of themes – some of them directly linked to live Jericho programmes (on Tax; Investment; Technology; Good Work; London); others within the framework of our work at the intersection of trust, purpose and engagement and commitment to responsible business, a better society and the common good. We were privileged to kick-off with insights on pandemics and an uncharted future, courtesy of author, friend and colleague, Margaret Heffernan. Uncertainty and resilience have been two dominant themes throughout, alongside a critique of the obsession with “just in time” managerial efficiency planning that, as the COVID crisis painfully exposed, has failed us miserably.

Business Life After the Virus: Build Back Better
12 Jericho Conversations

“The opposite of efficiency is not inefficiency; it is robustness – organisations must create a margin that allows them to adapt.”

We have listened and learned. As the current phase of the programme enters its final weeks, with race riots flaring in the US and Black Lives Matters resonating in the UK, we recognise that we have still not listened and learned enough. In the Conversation on the State of Trust, Cardinal Vincent Nichols reminded us that, to effect real change for the common good, we all need to “listen from the periphery and not from the centre”: a radical shift from where we are now, to where we need to be.

“This moment demands that all playbooks are cast aside and we get closer to reality, with more humility. We need a change in culture to do this.”

Unintentionally, perhaps, the Cardinal’s comments, spoken in the context of the State of Trust, brought home the truth that the underlying social and economic issues that stalked us through the pain of Brexit, remain close to the surface now. Deep inequalities and injustices prevail – whether in the context of the disadvantages and divisions evident in our capital city, or the fragility of families and communities not protected by the London bubble.

Britain in 2020: homelessness charity Shelter tells us that 280,000 people are living in vulnerable housing; The Trussell Trust is supporting more than 1,200 foodbanks across the country. And, let us not forget, COVID-19 is killing disproportionately more citizens from BAME communities.

“We must seize this moment to change things and address these inequalities. We’re not doing well enough at every level. A big, collective mission that national government gets behind is essential. Addressing racial inequality needs to sit at the heart of the policies we bring into recovery and renewal.”

The COVID crisis intensifies and accelerates the very real problems we face.  While we may, to some extent, be protected by the selective interventions of Chancellor Rishi Sunak and the government, ours is not a happy, flourishing, united nation. It will take more than an extended furlough scheme and occasional state subsidies to Build Back Better, especially as the prospect of mass unemployment looms nearer. Imaginative policy-making and substantial culture shifts will be required.

As author and former Twitter boss Bruce Daisley pointed out in the Conversation on Good Work, Mental Health & Workplace Wellbeing, we must at all costs avoid taking a cosy, London-centric, middle-class chatterati view of just how much pain is out there, not least for young people.

“We all entered into the crisis with a myopic perspective. The experience of the CEO is vastly different to that of the average 20-something, already suffering a cost-of-housing crisis. We need to understand and respect the lived experiences of others”.

This may be the first crisis since World War II where we are all “in it together” – but our experiences are not the same, nor will they ever be. This is true in the future world of work, where insecurity will most likely increase, rather than diminish.  The likely consequences of the crisis will push more people into poverty; increase disparities between the “haves” and “have nots”; see rising levels of disquiet among the young; potentially make the housing crisis more acute.

“Some CEOs will still tell you that they have a duty to maximise profits. We are moving to a climate hopefully where it is harder to believe these things. Extracting managerial value has been prioritised over extracting shareholder value.”

Extraordinary times call for extraordinary measures, as we explored in the Conversation on Responsible Tax: Who Pays & How? Responsible Tax is – for those who know us well – a project at the heart of Jericho’s client work, since 2014. Without tax, there can be no roads, no schools, no hospitals. The original title for the programme, curated on behalf of KPMG, was Responsible Tax for the Common Good. As we have come to understand in recent months, Public Health & Wellbeing is, in reality, the ultimate Common Good. Companies obsessing about their true purpose would do well to bear this in mind.

The tax challenge has been raised, understandably, in almost every Conversation so far. The tech. companies, the polluters and those seen to have “benefited” from the crisis have attracted much attention. But the wider context is one of a more responsible, better capitalism: it is easy to pigeonhole this as a simple issue of Corporate Taxation and Tax Justice. Without doubt, systemic inequalities need to be urgently addressed. But tax runs to the heart of the green issue and to the economic recovery. Someone somewhere needs to help pay for the billions promised to us all. We need to do this thoughtfully and responsibly – with structural reform over political expediency.

“Businesses shouldn’t just wait to be regulated. They have a responsibility to drive the change.”

One factor stands out, though, above all others. Now, albeit for accidental reasons, the state will dominate capital markets for some time yet. No-one wants, or can afford, a return to 1970s monolithic statist ideology – the new state interventionists must reflect and respect the tech-driven, globalised and mobile, complex world we now inhabit. They must be agile supporting a return to growth, as we work through the deepest recession in world history. But, above all, they must work hard to address the injustice and inequalities that have plagued the capitalist model for over a generation.

This requires vision and imagination (historically, in short supply among politicians and their advisors). It demands a true understanding of what levelling-up really means. As one panellist noted in the London Conversation – levelling-up is not about geography. It is about people, not places. It certainly cannot be about political point-scoring as the expense of our capital.

“There is clearly a bigger role for the state in the economy and it’s up for grabs what that is/ looks like. Only where there is a way, there is a will.”

The Common Good can be the lodestar for this imaginative renewal. Britain desperately needs a national conversation about how to Build Back Better – a series of Citizen Assemblies perhaps – followed by structural reform not only of our economics but of our politics, too.

Renewal cannot be imposed from the top-down. It can only be negotiated through citizen contributions, active participation and collective actions – the true definition of Common Good. The time for binary politics (and a binary media, for that matter) is over. The future needs to properly appreciate nuance, as well as negotiation: nuance that also understands the permanent state of uncertainty.

It is somewhat ironic that we have a Conservative government, with an unassailable majority through to 2024, elected on a levelling-up agenda. Even before the crisis hit, it was promising to splash the cash on some major infrastructure projects, while cancelling others. It seemed determined to squeeze London, despite the capital being (even more needed now as) a national engine of economic prosperity, for the benefit of others elsewhere. This was always naïve, if convenient for electoral purposes. The government was likewise talking a good game on green issues (with a chance to demonstrate global leadership at COP-26) but had yet to make them real.

“We currently sit in the middle of what most scientists recognise as the world’s sixth mass extinction event. Unlike the ones before, this one is entirely man-made. We need to take action now.”

Now is the time. A Conservative regime has the once-in-a-generation opportunity to be more radical and far-reaching than even the Attlee government of 1945. It must not waste its moment.

This is what we mean by The Imaginative State.

The Imaginative State, as we will hear from social activist Imandeep Kaur and others in the final Conversation, must embrace and engage civil society in all dimensions. It must be citizen-centric and sensitive to the true needs of citizens and society. It must listen to experts wisely. And it must prioritise actions over words.

“Expertise on its own is not enough. Complex situations are not solved by the expertise of one person.”

The Imaginative State must give voice and participation to young as well as old. It must understand, to paraphrase Lord Maurice Glasman and KPMG’s Jane McCormick, that a new covenant is required. Business has an active role to play. It cannot afford to be demonised any longer – though it also has to put its own house in order on key issues of diversity, Executive Pay, sustainability and more. The imagination of Business must be used wisely to support government.

“The first obligation of a corporate citizen is to pay its taxes. Investors in corporates need to hold them accountable for this – and for being a good employer. Can there be investment sector-led conditionality to build credibility around the purpose statements issued by companies?”

New coalitions – sometimes surprising – will emerge. Together, we can be the change and drive the change we all want to see. That is how we can legitimately start to Build Back Better. Imagination is required… to be smartly applied, in abundance.

The first eleven in the initial series of twelve Jericho Conversations are available to watch on catch-up.

The final session in the series – The Imaginative State – is scheduled for Friday 3rd July. Please sign-up now to join the conversation.

During July, August and September, the Jericho Team, together with our clients, will be running a series of deeper dives on a number of themes covered in the first twelve conversations: Responsible Tax; Good Work; Technology; Health; Youth and Transport. We will confirm details on these in the coming weeks.

Please get in touch if you would like to get involved. We could not have done this without the incredible support of Jericho clients and community. 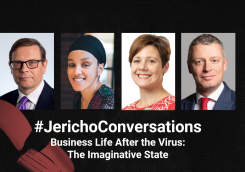