Be not too hasty to trust or admire the teachers of virtue. They discourse like angels but they live like men.

If you choose to get to the end of this ramble, you might prefer to call me a cynic or a realist. Whichever makes you feel better. Reflecting on our discussions at the fantastic online colloquium, I was struck by the challenges posed by the issues we discussed as well as the inherent contradictions that all such difficult issues inevitable surface. The main thrust I tried to pursue in my book1 was a simple one. The political climate has changed dramatically over the last couple of decades. The nature and tone of political debate has become more heated. Political positions have become more polarized. Previous certainties have gone out of the window – our views on globalization; the primacy of laissez faire neo-liberal ideology; the supposed effectiveness of trickle-down economics; our tolerance of the externalities generated by business activity; the acceptance of the idea that the role of business is exclusively to maximise shareholder value; the perils of financialization; and many other political issues too numerous to list.

The world has changed and those businesses that are to continue to thrive will have to find their own way of adapting to the new and still evolving environment. So far, so relatively uncontroversial – maybe.

The challenging questions are:

Hence my preference for ‘political capitalism’ over ‘stakeholder capitalism’. The term political capitalism recognises that politics is how we collectively (and inevitably very messily and imperfectly) find ways forward in pluralist societies where multiple and conflicting views, interests and moral perspectives exist – and, indeed, are to be encouraged.

The idea that business can somehow please all its stakeholders is for the birds. Being political, on the other hand, is “the ability to turn impossible demands (in given circumstances) into possible substitutes.”

I posit that people and institutions act primarily in their own self-interest. How they define such self-interest varies.

If one accepts the primacy of self-interest – however broadly defined, then a reasonable starting point is that business should act in its own self-interest and, some would argue, that self-interest includes having reasonably well-functioning democracies, well-structured, functioning markets, a planet in which we can actually live and conduct commerce, a level of trust within our societies that does not make the cost of doing business astronomically high, behaviours that are commensurate with the spirit of the times rather than being reactionary or going against the grain, and so forth.

This approach may be more realistic and more resonant with many than moralizing stances that business has a moral duty to defend our democracies and to do this, that and the other. To which some will respond that business leaders’ job is to run their business and the job of ‘defending democracy’ is a job for us all as citizens and for the political leaders that we have chosen to elect. And/or that it is foolish to swing from one silly end of the pendulum (business should only focus on maximizing profit) to the other, just as silly, end (business has the responsibility for sorting everything in our lives). This is the danger of other buzzwords like Corporate Social Responsibility.

Of course, it all also depends on the time horizon over which one wishes to engage as well as the perceived likelihood of having a meaningful impact relative to the resources required.

To do and/or to speak out

Is the role of business leaders to focus on running their business given all that is outlined above?

Or do they legitimately have a role in using their position and the resources they can mobilise to speak out publicly on political issues?

When we examine the substance of this debate, we again find many difficulties and contradictions. And, some would argue, quite a bit of hypocrisy.

I guess, rather than conclusions, these sorts of discussions end up raising more questions:

How will different businesses adapt to the highly polarized political environment and the shattering of previously held ‘truths’?

What is the role of business in influencing political debate? None? Through lobbying in the shadows? To speak out publicly on political issues?

If the last, do we want to be encouraging them to be activist, take sides and do battle – possibly thereby contributing to more polarisation? Or do we want to encourage them to be political, help take the heat out of the current polarization, and attempt to find viable ways forward in a divided world? Do they realistically have the skills and capabilities to do that, and might they be willing to devote the time and resources given all the pressures they are under?

When we say that we want business to contribute to democracy what do we mean? Do we mean that they should support our own particular view of what democracy should look like? Or should we be encouraging a pluralistic debate where we also encourage those who have views that are fundamentally different to ours?

As always, there are no easy answers.

Dr Joe Zammit-Lucia is the author of “The New Political Capitalism: How businesses and societies can thrive in a deeply politicised world.” He is co-Founder of Radix and a Trustee of Radix Big Tent. He has had a career in multinational business and as an entrepreneur before turning his attention to political and policy issues. His interest is in the nexus between business and politics. He advises business leaders on leadership in contemporary culture. 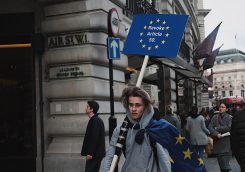