It has been an interesting week. Colin Byrne, UK & EMEA CEO of Weber Shandwick, launched a rather ill-informed personal attack on me on Friday, deciding that he, rather than me, knew my motivation for writing a book entitled “Trust Me, PR Is Dead”.

Colin remains a good friend but, for the record, he was wrong.

Meanwhile, someone I had never met on the other side of the Atlantic elected to call me “Bobby” and decided to write what he wanted to write (“PR Is Dead, Long Live PR!”) rather than ask relevant questions first. If he had asked me, I would have happily set the record straight. He, too, later admitted that he actually enjoyed my article. “I roll like my eyes”, was his oblique, Cantona-esque response.

Where Colin retrospectively span, Shawn simply made it up as he went along. Assumptions are the mother of all fuck-ups.

The book’s title has obviously hit a raw nerve. To be honest, I do not care much whether PR is dead or not. I make this point up front in the book – admonishing myself for not accepting that “where there is a buyer, there is a market” and that, as long as client-land continues to buy PR from agency-world, PR is still some way off resembling Monty Python’s famous Norwegian Blue.

We can argue over the semantics – but what is the point? It is clear that PR needs urgent reform. It remains mostly an analogue function in a digital age – Edward Bernays’ Kodak to the Cluetrain’s social revolution.

Moreover, my ringing death knells are not new news – you can trace them back as far as Citizen Renaissance (2008), or in my articles for Corp. Comms magazine last summer, Campaign last autumn, or PR Week (UK and US) a week or so ago.

And then there is this talk to the OECD and the Reputation Wars conference in Paris. If you fancy a short-cut summary (one-minute film here), you can simply visit the Unbound site, where I am crowd-funding the book (as indeed it should be done).

And, by the way, I was saying this stuff while still EMEA President & CEO of Edelman.

Whether it is impending reform or wholesale re-birth matters little. The fundamental point is that the world has changed and that PR – as it was originally constructed – is simply no longer fit for purpose in a social digital age. No-one is in control, least of all the self-proclaimed “storytellers” and “message managers”. It’s time to wake up and smell the coffee (though preferably not a Starbucks).

A new model is needed – a model I have chosen to call Public Leadership. This is activist, co-produced, citizen-centric and society-first. Public Leadership recognises that the world has changed (Edward Snowden, anybody?) and that there has to be a better way – for society, for business and, yes, for communications, too. In case nobody noticed, we cannot go on like this. Our world is in meltdown.

Like it or not, we are faced with inevitable disruption and certain schism. This was articulated beautifully by Tom Fletcher, Her Majesty’s Ambassador to Lebanon, aka The Naked Diplomat, in a blog post this week. He kindly gave a HT to my PR Week OpEd and wrote:

“Phillips’ critique of traditional PR is that it draws too much from its origins in a now buried age of institutional authority; that it insufficiently reflects the new realities of a world in which the balance of power between citizens, business and government is shifting from hierarchies to networks; that it prioritises bureaucracy and generalism over transformation and expertise; and that it has prioritised pumping out a message over changing society. As a result, he argues, it has lost trust.

Sound familiar? Substitute ‘traditional diplomacy’ for ‘PR’ and we can see a similar challenge.

Diplomacy has detached itself from public debate through meaningless platitudes; much of its form (summits, communiques) was designed in 1815 for an age of monarchies and great states; and it has been slow to adjust to the next wave of disruption. (Let’s be honest, we are also, post Snowden, Assange et al, less trusted than we were).”

Tom Fletcher has nailed it.

However much we see and loathe the bloated bureaucracies and cookie-cutter solutions of the big consultancies, this hardly matters for the future of PR. As Diogenes the Cynic once observed “the market is the place men go to deceive one another” and I am sure there will be many, for some time to come, who continue to enjoy their own deceptions in the marketplace. But the societal and generational shifts are axiomatic and irreversible. The disruption is permanent. Only the greatest dunderheads in the world will deny the change.

The erudite David Weinberger once chastised me for defending the future of traditional media (I was asked to do it because I debate well, rather than out of choice): “This is like the dinosaurs looking in the mirror in self-admiration”, he mused “and congratulating themselves on what beautiful dinosaurs they were”. Too many dinosaurs sadly still roam the plains of the PR industry.

Back in 2014, the former journalist Martin Vogel (disclosure: a Jericho Chambers network partner) also posted a blog this week. In it, he said:

“If “servant leadership” was a response to the demands of the bureaucratic era, “public leadership” specifies the leader’s calling in the networked age – to be citizen-centric and society-first, giving greater voice to employees and customers, putting them at the heart of how a business is organised and behaves”.

Martin kindly quotes an excerpt from my book:

“Public Leadership echoes the Aristotelian principle of virtuous leadership. It makes the case for the state (business state or political state) as an active polis: designed for the flourishing and wellbeing of all its citizens, not just the pursuit and protection of power and elites.

“It also challenges the market fundamentalism of the past thirty-five years which, to paraphrase Harvard Professor Michael Sandel, has drained public life of moral discourse and views the polis with thinly-veiled contempt. It re-affirms that there is such a thing as a society.

“Because Public Leadership speaks to the 99%, it heralds the fight-back of a new social democracy in the world of politics, business and brands. It is social because it is among and between the people; it is democracy because it enjoys the participation of us all.”

“Public Leadership is an attractive alternative to the ideology of managerialism. It’s also, as I see it, an alternative to revolution – requiring, as it does, an enlightened elite to recognise their interest in fostering an active polis. Time may be running out though, and the polis may just stir itself”.

The death of PR runs far deeper than the myopic world of PR alone. This is why my book is as much about the abuse and exhaustion of trust as it is about the failures of leadership – both in business and in politics. We do not need to look much further than the Banking and Financial Service sectors to know this to be true. There is a reason that the title links trust to the death of PR – something that the few detractors tend to simplistically overlook.

The visionary leaders (Colin and others, please take note) are the ones confident to dismantle the power structures that took them to the top in the first place. I have written before about the Public Leader being prepared to press the self-destruct button. There is no point trying to defend the indefensible or, to use a favourite phrase of many, “to paint lipstick on the pig”.

The first came via Bjorn Edlund, another good friend, former colleague and consigliere, eager to warn me of the perils of my ways. Bjorn tweeted that mine was not PR as he recognises it. But it really is – and Bjorn knows it to be so. Poignantly, Bjorn argued against this blog post from Mary Fletcher-Jones, sent to me by the author, which questioned Richard Edelman’s thinking around trust in defence of his controversial client, Penn State University and its response to its recent (and much publicised) child abuse scandal.

“We know Richard well enough” to know this not to be true, observed Bjorn. Indeed, many of us do. But Mary shone a bright light on that fragile relationship between PR and trust and on the truth that trust often spoken is trust rarely earned.

Meanwhile, Go Ahead’s Simon Craven shared with me the parable of Blockbuster and Netflix. It is a sweet allegory.

In 1999, Blockbuster’s IPO valued the company at $4.8 billion, while – in 2000 – Netflix had only 300,000 subscribers and was losing money, doing DVD rental by online order. It also had a vision that films would one day be streamed cheaply over the Internet. But that future was not there yet. Netflix offered Blockbuster 49 percent of the company. Netflix would become blockbuster.com and be Blockbuster’s online video division. Blockbuster said no. They didn’t see a threat from digital media.

For me, the issue is not a simple one about the death of Public Relations. The choice is now straightforward and immediate. PR can embrace the progressive revolution. Or, like Blockbuster, sleepwalk over the cliff.

This article was originally published on the PRCA website. 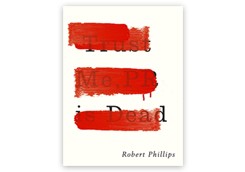