While we might fear the march of the robots, what if they were actually a force for good? Read views from our latest Future of Work is Human event.

At the latest Future of Work is Human leadership dinner – powered by CIPD and Jericho Chambers – a wide-ranging and complex discussion proved once again, that real debate isn’t much like Question Time or even PMQs. It’s messier and more complicated than that. As part of CIPD’s ongoing agenda on the future of work and the impact of technology, we held a roundtable to discuss some of the latest thinking. Here are some of the key ideas that came out of the conversation.

Robots aren’t taking over our jobs just yet, but automation is already augmenting many roles. Much of the current discussion on how new technology stands to change the world of work is limited and deeply pessimistic. Debates typically centre on the extent to which humans are going to be ‘replaced’ or which jobs or tasks are most at risk of automation. This narrative is driven by the assumption that all we care about is productivity and since machines are seen to be much more efficient with the potential to make better decisions than humans – it can only lead to one conclusion. But in a world that is more connected than ever before – individuals are increasingly feeling isolated and desire human interaction. While we might fear the march of the robots, what if they were actually a force for good?

Is this moment special?

The conversation about AI and robotics started with very different views on whether this moment in history is really different and special. Could it be that the power of this technology in a society that is already ‘brittle, vulnerable and unequal’ means we are at a critical juncture: or do we just ‘need to get over ourselves’ because it’s business as usual and technology has actually been progressing more slowly over the last ten years? As one optimist about the potential of tech put it, perhaps we need to ‘stop faffing’ and get on with it.

Is the future already here or further off than we are told?

There is also disagreement about whether AI is part of our living world or further off than we expect – with one speaker noting that being a customer of a high street bank is really quite difficult these days due to under-staffing.

There was frustration that conversations about AI are so often dominated by ‘celebrity AI’, particularly the complex issues around driverless cars, rather than mundane but important uses that are already in practice like monitoring the safety of tunnels and bridges. Those more engaged in the field are inclined to express positive views about the rise of technology; one pointing out that the demise of typing pools has done little damage. Others fear hidden and unintended, even perverse, consequences and long for legitimate processes to make public policy decisions about the parameters of AI.

Is technology exacerbating divides or just making us more aware of them?

Whether you believe that AI is already here or further off than ‘propaganda’ suggests, the issue brings into sharp relief unease about the social divides between those with knowledge and choices and those without. It was noted that the past decade has been the worst for living standards since the 19th century. This and tech changes are pointed to as the basis for the growth of populism. In the global context, it also raises concerns about how markets compete and the implications for less developed countries.

Some argue that these issues are nothing to do with technology but just ongoing social problems; education for a modern world; policies around fair distribution of information, power and wealth; ownership and use of data; the rights and voice of employees; the responsibilities of business; the role of government.

For others, the use and potential misuse of AI is a game changer that threatens the very stability of our society. How we manage data also remains a worry with all the growing ethical and control concerns.

Many express profound concern about the state of our government and its ability to even consider these issues, much less act on them: ‘democracy is dead’, ‘the government hasn’t the knowledge it needs to manage this’ and inevitably, the dominating subject of Brexit means the government seems to lack capacity to think about anything else. Short-termism in a more complex world with an ill-informed political class is a worry.

Perhaps our focus on economic health is part of the problem?

Some leaders thought that deeper questions lie in agreeing what we want to achieve – is it economic health? If it is, then for whom? How can the primacy of finance be balanced by greater voices from those who are living with the consequences of globalization; insecure, poorly paid and low-skilled work without hope of a better future? Should we instead focus more on happiness and engaged employees, with consideration for future generations, perhaps learning from the John Lewis approach to business?

If not this, then what?

If elites allow technology to only benefit themselves, we risk an explosion of incivility. If we want to change that dynamic, we need to have different and better-informed conversations which embrace the views of those without power or influence who feel pessimistic about the future. If we spend too much time talking, we could miss what could be a moment of profound change. What can we learn from other moments in history? The Warnock Commission and the abortion debate in Ireland? The answer may be ‘a lot’ but the question remains, ‘who has the moral authority, credibility and determination to do this better?’ Based on the events of last week, it’s not our current government.

Beyond central Government, we are seeing some of these ideas being picked up more regionally but should we be pushing for the wider debate needed on areas like education and skills, employment legislation, corporate governance and transparency?

Many expressed thoughts about what we can all do within our own organisations to think about these issues and address them as much as we can in our own context, focusing for example on the ideas of ‘good work’. We are not powerless to effect change and address some of these issues.

If you would like to get involved with the Future of Work is Human programme please contact becky.holloway@jerichochambers.com 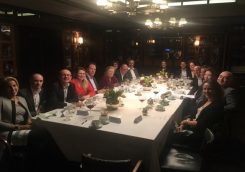