Having been lulled along in a period of relative peace and plenty, it is a bit of a shock to find ourselves in troubled times. For progressives, Brexit was the wake-up call. Trump the body blow. Now, people are protesting. Politics has polarised. Voters are swinging all over the place. There is a kind of electoral anarchy going on. Which would be quite exciting if it weren’t also dangerous.

The growth in hate crime and odd outbreaks of violence are sparks that alert us to escalating social heat. Its locus is growing inequality and a crisis of confidence in self and place borne out of many things but for which the ‘other’ – immigrants – cop all the blame. As Nietzsche wrote in Beyond Good and Evil, ‘In an age of disintegration… a person will have the legacy of multiple lineages in his body, which means conflicting… drives and value standards that fight with each other and rarely leave each other alone’.

This sort of social unravelling is unsettling. But it also offers opportunities for new ideas and formations. I believe this is happening at the grassroots of society. In all sectors, there is an upswell of creativity and purpose that is incredibly exciting. But this is in stark contrast to what is happening at the top of our organisations. My contention is that leadership today is woefully inadequate – of entirely the wrong kind in these turbulent times. I’d like to call for a different kind of leadership – more of what I’m going to call ‘Activist Leaders’ – people of passion and principle, who are flexible and adaptive, and who are willing to stick their heads above the parapet to challenge, to propose, and to dare to think differently.

I have called them Activist Leaders because these are the qualities of effective activists and campaigners. My organisation, the Sheila McKechnie Foundation, trains campaigners and change-makers – so I’m very familiar with the type. True campaigners are values-driven, passionate and determined. They do not conform. They think outside the box. They are instinctive systems thinkers. Ultimately, they look outside their organisations to see what they can achieve in the world. Not inside to ensure survival of the machine. This is not what drives them.

Such people make for transformative leaders – people who change the way we think about and do things. Sheila McKechnie was just such a leader. Anita Roddick at The Body Shop. And, I’m afraid to say, Trump and Farage are exemplary activist leaders too – no matter what we think of the values that drive them. Indeed, for progressives, the activist leaders are currently on the wrong side.

It is relevant that both Trump and Farage come from outside the systems they now dominate – because I believe it is the ‘the system’ – the dominant culture across sectors – that is in large part the problem. It is anathema to activist leaders.

Our working cultures are now dominated by the commercial tropes of performance management, targets and accountability, and the valuing of resource management, above all else. Risk management is king. This is anathema to Activist Leaders. They try things not knowing if they will work. They go with their gut – not tables of evidence. But today’s workplaces cannot cope with such behaviour and definitely do not promote such people to the tops of their organisations. So we end up with capable but safe and measured people in charge. Which is not what these times need.

(And, let’s be honest – a lot of those at the top of organisations are acting out of self-interest. They are doing quite nicely, thank you, so don’t really want change. It is no surprise that it those who have experienced adversity who have most reason to pursue change and are often the most effective change-makers.)

The public and voluntary sectors have been slaves to this kind of ‘professionalisation’ for years. And it is undoing us. Practically and morally. So, it is with some surprise that I have started to meet senior business professionals who talk about themselves as ‘activists’ – something you’d struggle to hear a senior charity exec say. If the private sector is going to be driven by purpose and social outcomes, while charities and public bodies worry about ROI, then surely it is time for a re-think about what we are all here to do.

Looking forward, my prediction is that it will matter less what sector you are in – whether public, private or voluntary – and matter more what drives you and the approach you bring. Activist Leaders will collaborate across borders with those who share their values across sectors with much more permeability of ideas.

Honestly, I don’t mind where the brave thinking and determined commitment comes from – as long as it is there. I just want more leaders to be led by what we believe to be right, get back to purpose and a willingness to embrace complexity and risk as we pursue change. Because, quite literally, the heat is rising at the moment.

Sue Tibballs is Chief Executive of the Sheila McKechnie Foundation, with over twenty years’ experience working at the forefront of the social change sector in the UK, and extensive experience of campaigning, advocacy, social marketing and behaviour change. 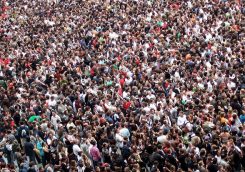