Bosses should think in terms of human value, not shareholder value.

It was good to see the CEOs of organisations including Amazon, Facebook, Starbucks, IKEA and Google taking on the bullying aggression of Donald Trump in the courts and media. Given the hideous executive order banning travellers from predominantly Muslim countries, it was the right thing to do. But such activism from senior business leaders is long overdue. It is a shame that it took the Trump election to serve as the catalyst. CEO voices have been silent for too long. Immigration bans are not the only misdemeanours they need to challenge – from climate change to slave labour.

I have long-argued for activist business leadership, urging CEOs to go beyond Unilever’s Paul Polman’s assertion that global corporations should think and behave like global NGOs. CEOs need to think and behave like social activists themselves. The only way to effect real change is to challenge the status quo. Progress cannot be achieved while defending business as usual. This is now more important than ever before: basic human rights are under threat everywhere, and business has far too long turned a blind eye, seeing those who fight for their rights as the enemy. They’re not.

Polman’s analogy is in any case imprecise. Some NGOs (especially the large ones) increasingly behave like behemoth corporates, driven by their funding departments and afraid of upsetting the corporations or government departments that feed them. But Polman’s intent is good – understanding that large corporations can be a force for good. They have the scale and reach of entire nation-states (the turnover of Wal-Mart, for instance, is greater than the GDP of South Africa); are truly globalised and therefore have no appetite to embrace economic nationalism; and – if effectively organised – enjoy an agility and connectivity with their workforces that can be every bit as democratic as a nation state. The CEOs of global multi-nationals should therefore behave like responsible, progressive statesmen and women. It is essential that business leaders have a definite point-of-view. I would like to think this is what my Jericho colleagues and I are driving at with our work on the global Responsible Tax Project for KPMG.
Enlightened, activist CEOs will naturally behave partly out of economic self-interest –protecting their License to Operate in volatile times and/ or defending the very practical need to support freedom of movement across highly mobile workforces. But business activism must go beyond this and create a License to Lead. Activist CEOs can support the common good in business and society. While there are legal and regulatory obligations placed on every organisation, these cannot be used as excuses to hide, just as the usual Davos platitudes are not good enough either. The real bottom line is that there is a moral and ethical dimension to business. But understanding this is only part of the journey. Actively prosecuting it remains the missing piece. Supporting the common good is the right thing to do. Put simply, common good is common sense.
Article originally published in Management Today, read the full article here. 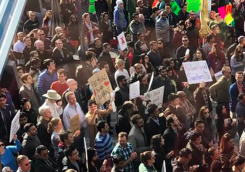