Chartered accounts are in the eye of the storm. They have been  here before and responded in the public interest. They must do so again say Matthew Gwyther and Neal Lawson.

Accountants are being held to account.  Today’s report by MPs into the future of audit is one of no fewer than five current or recent reviews, consultations and reports into the British audit market. The select committee  highlighted the fact that  last year that 27 per cent of the audits of FTSE 350 companies the regulator  reviewed did not meet the appropriate quality standards. “The delivery gap is far wider than the expectation gap and that is what must be fixed as soon as possible,” it said. The Big Four have, “fostered a precarious market which shuts out challengers and delivers audits which investors and the public cannot rely on”. The world of audit is in everyone’s cross hairs.

But while they are rightly getting their share of the blame for Carillion, BHS  and Patisserie Valerie it would be a mistake to just point the finger at the accountancy profession. There is something bigger going on that we would be foolish to miss, a wider breakdown in institutional accountability and corporate governance that is evident across different sectors, nations and continents. Nevertheless accountants need to hold their hands up and be ready to make any changes necessary to rebuild and sustain the reputation of the profession in service to the institutions for which they work and for our wider society. In today’s Times Deloitte appears to be doing a mea culpa with its UK Managing Partner Stephen Griggs admitting:  ‘Nobody — ourselves included — doubts the need for change.’

In a world of austerity and huge concerns over tax dodging, of precarious work for the many and seemingly exorbitant rewards for the few, there is an underlying national sense that something is not right in the world of business.  ‘Audit dodging’ cannot become the new tax dodging, and the Big Four cannot be too few to fail.

Even on the narrower issues of audit and accountancy there is a big mismatch between reality and the perception of what accountants do, how and why.  This is the expectation gap, between what the law and regulations say institutions must do and the view that audit should spot and reveal potential future failure. Audit is a snapshot of the past. If we want it be more than this then let’s discuss, plan and resource that.

But this is just one aspect of a world that is changing so comprehensively and so fast; a world in which we all struggle to keep up.  Information now flows further and faster. Data is both more centralized and more dispersed. Elites have both more control and less, as big data and big organizing compete about who has power, how its used and in whose benefit. Deference, control and certainty have gone out of the widow. In its place we have an age of accountability, transparency and scrutiny.

The economic system in particular has been growing through rapid and challenging change – much of good, some of it not so. The rich irony for the accountancy profession is that is was in another moment of fierce change that it created a chartered body in the UK to serve the public interest – the Victorian era. Like the modern labour movement – accountants were a product of industrialisation. While the unions fought for fairness in the workplace, the cooperative movement was founded to ensure fair play for goods and vital services, the Chartists campaigned for democratic rights and the ILP prefigured Keir Hardie’s Labour Party to give political representation to the working class, the accountants’ professional bodies were created to ensure free markets work in the public interest through processes of rigorous audit. The ACCA become the policeman’s badge.  In 1880, the ICAEW stood for integrity, confidence, transparency and a challenging attitude. It was there to protect the wider interests of society – not to rubber stamp the work of robber barons.

Companies fail in a process of creative destruction – shareholders suffer and when they do a high human price among the workforce is paid. But what we must protect everyone against is greed and any financial subterfuge that feeds it.

In this context, and despite what Michael Gove said in the heat of the Brexit battle, we do need experts – neutral and skilled experts whose first calling is the public interest. An accountant is the expert when she/he is called upon each year, as an external auditor, to give a full and honest appraisal of the company’s prospects.

We cannot undo the past.  What accountants can do is understand the current context of anger, the emerging complexity of the world we live in and the burning need for a new ‘age of accountability’ that looks to the re-creation of the profession in these new and fast changing times.

Such a renewal is vital. The professions in general cling to the idea that they are important to society, but society itself seems to be less and less respectful or trustful of them. With an enfranchised, educated, well-informed and activist public, a right to challenge has replaced any earlier expectation of quiet deference.

So, in the words of another influential figure from the era in which accountancy was founded,  what is to be done? The profession needs a renewal of the Spirit of 1880 and it needs it now. Learning from its radical history, the role of Chartered Accountants in the future will be vital. Globalisation, financialisation, digitisation and the rise of the networked society makes accountability more necessary than ever.  Everything organisations do is under the spotlight all the time. So the profession has to adapt and develop if it is to meet these new challenges and continue to serve the public interest. 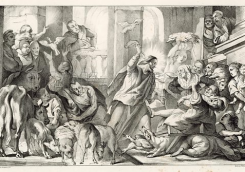