In the wake of the infamous Panama Papers  –  a leak one thousand times bigger than Snowden and Assange  –  traditional hierarchies,  political and media alike,  react with usual hand-wringing gusto. France immediately blacklists Panama; the UK government threatens “emergency legislation” against aggressive tax avoiders; and the Big Five European  Nations promise “open co-operation” on corporate ownership. Tellingly, the Americans – so often lone rangers in the world of tax – absent themselves from the conversations. The elephant in the room remains in the corner, with the bigger questions about wealth distribution, power and injustice – both state-sponsored and corporately-led – still unanswered. These are not the questions leaders want to answer.

Tax is not the core issue. It is merely  a manifestation of the problem of what is fair, just and right – and the continued absence  of a moral dimension to what is all-too-often legal.. The more significant questions raised by Panama Papers are ones of globalisation, transparency and fairness. But these are too complex for world leaders to tackle, still less explicable in a much-favoured 30-second media soundbite. Tax, the subject du jour,  therefore offers an easy excuse  – cake fed to the masses. Better that the politicians (and accompanying media) vilify pantomime baddies instead of asking bigger, better questions about wealth, power and social injustice and their role in maintaining an ugly status quo. But, as Superman knows all too well, everyone needs a Lex Luthor to portray themselves as superhero instead.

What we are  witnessing post-Panama are the usual, predictable and somewhat feeble reactions of a political elite that claims to understand citizen anger but then frequently  reacts with gross indifference to the common good. It chances that the anger will eventually fade. This wilful blindness is a mistake in an increasingly activist and volatile world.  In addition, by failing to ask  courageous and more meaningful questions around justice and common  good, leaders end up confirming their own mis-placed prejudice that spin, not substance, provides them with an escape from the real  problems at hand. Hence the glut of sudden action and announcement. A good society deserves better. In  a world where whistleblowers and (social media) activists abound, those who fail to “do the right thing” now will eventually be found out anyway.

This schism between elites and the general public is well documented in the 2016 Edelman Trust Barometer. It is  demonstrated powerfully by the continued rise of a global caucus of the angry and discontent. Witness Donald Trump  in America, AfD in Germany and/ or Marine Le Pen and the Front National in France. Justifiable citizen outrage can no longer be met with meaningless political gestures or platitudes, or by vanilla politicians who seem to learn little from history and are themselves the catalysts for swelling revolutionary forces against them.

Occupy warned us several years ago that such anger was on the march. It only needed focused  and articulate leadership to make it real and maybe even electable. Those now rushing to over-simplify and ignore the root problems of injustice and inequality – from taxation to migration –  only make matters worse. Tired and failing elites must be called out as the principal barriers to a better, fairer and good society.

The  late philosopher Tony Judt reminded us that the case for social democracy and a flourishing polis has never diminished: we have just forgotten how to argue for it. Two centuries ago, the Victorians (with pioneering heroes like Robert Owen, George Cadbury and Titus Salt)  understood the need for “doing good” in the wake of the great disruption of the first Industrial Revolution and the bi-polar society that it imposed. They rose to the profound social challenges  of the day – working wages and standards,  employee representation, education, health and the public realm – and acted in the public interest, for the common good. If we are now experiencing disruption through the fourth industrial revolution, as the World Economic Forum insists, then we need to re-discover a commitment to societal  enlightenment and embrace the urgent need for enlightened Public Leadership.

Donald Trump is not an enlightened Public Leader.  But he is the visceral embodiment of something that is very real.

Rolling Stone magazine brilliantly captured the essence of his rise in three simple words: “America Made Trump”. 406 miles from Capitol Hill, in Grundy, Virginia, the life expectancy of an average white American male is the same as his counterpart in downtown Baghdad. In real terms, the mean salary of the American blue-collar worker has fallen by over 25% since 2001. This is the real discontent that Trump is leveraging for political advantage. The question should not be “why is Trump shaking the establishment like this?” but instead “how did America not see this coming?”. Social injustice breeds leaders like Trump.

In a cab ride in Washington DC recently, I asked the driver how he was feeling about what comes next in US politics. “Well, sir”, replied the quietly-spoken, church-going man “we are preparing to riot”. For him, the visionary hope of America’s first African-American President has been cruelly extinguished by a white Congressional elite and “riot” provides  his only voice.

In a symbolic gesture, Pope Francis airlifted 12 Syrian Muslim refugees from the island of Lesbos to the sanctuary of the Vatican. He has a gift for the photo-call, for sure, but no-one can doubt his compassion. Meanwhile, in the UK, many of those campaigning to exit from the European Union show no compassion and make thinly-veiled attempts to make it instead a referendum on (Muslim) immigration, playing to base-level fears and prejudices. They would not even recognise any similarities between their own dog-whistle politics and those of Donald Trump.

I write as someone committed to the European Union but twice in recent years, the EU has not demonstrated “good” within its community. A project dedicated to the peace and prosperity of the continent (as the Franco-German axis likes to remind us) first hung Greece out to dry with punishing austerity and then failed miserably to demonstrate collective understanding of the common good in dealing with a humanitarian crisis of almost biblical proportions, much of which (from Sykes-Picot to the bombing of Libya and the lack of constructive intervention in Syria) was very much of its own making. Instead of negotiating  good, European leaders imposed further injustice.  If we are to be the good or better European society that we promise ourselves, we have to show better collective belief in and support for our fellow citizens, of whatever colour, denomination or economic status. A good Europe cannot exist like Hobbes’ Leviathan.

“The  future”, novelist William Gibson noted, “is already here. It is just not evenly distributed”. The refugee crisis in Europe is Gibson’s vision, writ large. A good society deserves better leadership that acknowledges and  addresses the re-distribution of wealth and power head-on.  A good society demands that leaders tackle the fundamental  causes of inequality and injustice (political or corporate) and not merely tinker with the symptoms and then issue meaningless platitudes. Actions must speak louder than words. The world is an anxious and fragile place. The absence of good leadership has created a dangerous vacuum that threatens the common good. We cannot go on like this. Actors like Trump,  Le Pen and their ilk remind us why.

Robert Phillips is the co-founder of Jericho Chambers and the author of Trust Me, PR is Dead (Unbound, 2015).

This article was written to celebrate 20 years of Good Business. 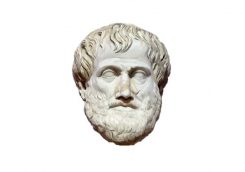