“But that day, as I sat on the tranquil shore, it was possible to believe
one was gazing into eternity.”

So wrote WG Sebald in The Rings Of Saturn, as he walked the Suffolk coast. And indeed, the romance of our country’s most Easterly point, with all of the weight of our history and geographical mass behind it, has often captivated the imagination of the artist. It is a marginal place, literally on the edge of our country and what is known. And for the artist, the margin is the most interesting point as it is there, on the edge of experience that we find the best perspective, the best vantage point, the best opportunity to understand ourselves.

In 1913, in Lowestoft, as far east as you can get, it’s where Benjamin Britten was born, arguably the greatest British composer of the 20th Century and a man who knew a thing or two about living on the edge of society. A little down the road into Suffolk, Snape Maltings – Britten’s extraordinary concert hall gift to his home region – survives and thrives; a world-renowned crown jewel amongst Suffolk’s cultural assets which encompass everything from the Regency delight of Theatre Royal Bury St Edmunds (recently the centrepiece of Armando Ianucci’s brilliant David Copperfield film); through to the more contemporary charms of the world-famous Latitude Festival.

In Lowestoft itself though, the story has been a little different. Here unemployment is now much higher, educational attainment much lower than both county and national averages. A third of all children in Waveney are living in poverty. And while a local high school proudly bears Benjamin Britten’s name; with music education provision almost wholly removed from the state curriculum, it feels hard to imagine a new Britten might emerge in the town.

It’s a disparity mentioned elsewhere in this paper, and one which characterises the region as a whole, offering a microcosm of the growing global gulf between the haves-and-have-nots.

Last summer, I became Artistic Director of HighTide, one of the UK’s leading new writing theatre companies. Historically, we have presented a programme of new work in an annual festival in Aldeburgh, our work then transferring onwards to major stages across the UK, such as the Royal Court, Soho Theatre and Manchester Royal Exchange. From our base amidst the most privileged echelons of Suffolk society, we have launched the careers of now household names such as playwright Jack Thorne (writer of the Harry Potter play in the West End, and wildly acclaimed series for Channel 4, Netflix and more) and director Michael Longhurst (now Artistic Director of the Donmar Warehouse). In Aldeburgh we have found a loyal, culturally literate and culturally curious audience, who have eagerly accompanied us on new journeys of theatrical innovation, helping us push the entire country’s theatre sector forwards.

And while my own career has seen me direct for the National, the Royal Opera House, the Young Vic and many more besides, it wasn’t the glorious welcome I have had from our longstanding patrons that most excited me to take on the challenge. Rather, it was what was waiting down the round in Lowestoft and the international significance that Suffolk holds. For if new ways can be found to bridge the divides across class and background here, new solutions to simmering social tensions, then models may be found that generate increasingly necessary cohesion, uniting communities and inspiring new generations.

“Culture is necessary for us to level up.”

Culture is necessary for us to level up – only by first imagining better worlds do we begin to make them a reality. And so we have seen at HighTide throughout this past summer where, instead of our usual festival, we instead rolled up our sleeves to use culture to support our communities, commissioning storytelling resources for 30 local primary schools struggling to support students navigating a mid-pandemic transition to secondary education; establishing a digital youth theatre with 4YP, the Health Service for Suffolk’s most vulnerable young people; and inviting six of the country’s most feted writers, with Olivier and BAFTA nominations to boot, to create short films about hope and love in lockdown. Our participants and audiences tell us our work has combatted loneliness, improved literacy and health, and generated pride in the community.

We’re proud to be joined in our mission to widen cultural opportunity and find new ways of inspiring change in the East by a host of partners and colleagues, whether that be the local authority, where under the formidable eye of Arts Development Manager Jayne Knight, resources are continuously found to animate the region’s heritage assets; the incredible team at Britten Pears Arts who take music into hospitals, care homes and more; the Suffolk Community Foundation who secure vital funding every day for a raft of charities and social enterprises. There is a rich, primed, proactive cultural network with the ambition to make great change. Now is the time to seize the opportunity. We can find the energy to create a new cultural hub, a new string of pearls – the potential is there. We just need to draw it all together.

“A tide is most certainly turning. And if you had been in Lowestoft last summer, you would have seen some of the first green shoots of new cultural renaissance”

A tide is most certainly turning. And if you had been in Lowestoft last summer, you would have seen some of the first green shoots of new cultural renaissance at the inaugural First Light Festival, a 24 hour free festival on the longest day, celebrating the light that shines on Lowestoft first and foremost and bringing 40,000 people to South Beach, generating almost a million pounds of economic activity as Talvin Singh, Gilles Peterson and more took to the stage. What further regeneration might be sparked with consistent cultural intervention?

In 2023, HighTide premieres a stage adaptation of Benjamin Britten’s diaries, the first major theatre commission written by another of our discoveries, Ben Weatherill, whose fringe hit JELLYFISH, about a young woman with Down’s Syndrome and her right to a romantic life transferred to the National Theatre; making Sarah Gordy the first-ever leading lady with a learning disability on the National stage. Ben will tell a tale of young Britten, discovering his genius in Lowestoft and we’re delighted that major theatres across the world want to partner with us on bringing this show to life. But before it reaches any other stage, we are most excited to present this show at Lowestoft’s Marina Theatre, proudly standing and serving audiences, including Britten himself, since 1897. We’re most excited by the opportunity to invite the young people of the Britten High School to finally get to know the man behind the name above their door; to help them better understand what he was able to see, standing at the edge of the country; and to begin imaginative adventures of their own that will carry Lowestoft confidently into 2040. 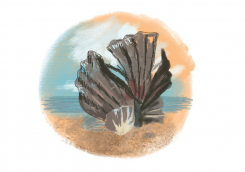