We want to change the world.  Of course that means ending poverty and stopping climate change. The problem is, though, we really don’t know how to do it.  Two models – the bureaucratic welfare state and the free market – dominate our thinking about society and how we can achieve change.  The first involves lobbying for the state to do things we think need to be done – to increase taxes on the rich and benefits for the poor for instance. The problem here is that in a global economy and complex society this old 20th-century lever-pulling approach doesn’t work – certainly not in the way it once did. The biggest reason for the failure is not the want of good policy or effective leadership – but because there simply isn’t the agency to make it happen. The relative equity of the middle decades of the last century was a product of working class forces combining with middle class managers and intellectuals to forge a project through the unions, the Labour Party and a state based on the governing philosophy of command and control.  Little of that is now relevant. While the free market has provided an alternative model for organising society, this has reduced equity and devalued public services, so that we can no longer prevent people falling into poverty. In both cases, the result is a highly centralised state, and neither of these alternatives offers much hope for the future.

“It is time for a new approach.”

Given the weakness of these approaches, some people suggest that salvation lies in local projects. They work for small changes here or local improvements there, in the hope that somehow bigger change will happen. Many just accept that ‘resilience’ is the best we can achieve – a ‘hunker down and ride out the storm’ approach. The problem is that the storm never goes away.

The evidence mounts up that none of this is really working. But rather than change, too many just keep on doing the same thing, hoping for a different outcome.  It is time for a new approach.

Compass has been working on a new theory of change which we are calling 45 Degree Change. The observation is simple. There is a huge amount of energy and innovation going on in civil society, public services and the new economy. People and organisations are experimenting with new ways of deciding things and doing things – new forms of collaborative action – much of it accelerated by new digital technologies and social media. Local authorities are experimenting with citizens’ assemblies and participatory budget making; communities are setting up self-help groups for pressing needs like adult social care; people are combining to provide for their energy needs or to share their resources and/or time. Initiatives light up the sky like fireworks and we see a glimpse of the good society ahead of us.  This picture is very similar to that presented in Barry Knight’s book Rethinking Poverty, which talks about ‘bottom up’ meeting ‘top down’. But these initiatives can’t be sustained or systematized and so we return to darkness. This is where we need the state – to help resource, legitimise and regulate in favour of these emerging collaborative and socially responsible organisations. Sometimes the state just has to know when to get out of the way.  The expression ‘45 Degree Change’ refers to the meeting point between the vertical state and these horizontal emerging social, economic and political practices. This is the fault-line through which a new society can and must be born. If Rethinking Poverty had had a Chapter 7, this would have focused on this meeting point and the role of the state in achieving the good society that we all want.

Over the next few months, Compass and Rethinking Poverty – a legacy project of the Webb Memorial Trust – will start to explore this meeting point between the state, local and national, and these new bottom-up initiatives. We want to understand why and how these initiatives are emerging, how they can be scaled up and joined up, and what the role of the state in that process is. We want to look at new ideas and good practices and to identify the barriers to change.

“This is the fault-line through which a new society can and must be born.”

In the course of this exploration, we hope to unearth and examine emerging initiatives all over the country. As a first step we plan to look at the set of inspiring local projects/initiatives documented by Aditya Chakrabortty in his excellent series The Alternatives, which ran in the Guardian from January to September this year, and which Rethinking Poverty has been picking up in our monthly Talking Points. In each case we will be analysing the article to see what interaction, if any, there was between the local project and the state. If there was some interaction, how did it work and what did it achieve? If there wasn’t any, what might have been achieved if the state had been involved? Are there cases where the state simply has no place?

Following this we hope to look at local food initiatives; the local wealth-building work being done by CLES – the Centre for Local Economic Strategies; the #thehullwewant project; how the model of local politics being developed by Independents for Frome is being replicated and adapted; and many others. If you have suggestions for projects/initiatives/ideas we might want to cover, please contact Caroline Hartnell on carolinehartnell@gmail.com.

Find our more about Jericho’s Theory of Change and get in touch. 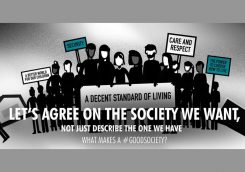